California Climate: Chapter 56 of Roughing It

We rumbled over the plains and valleys, climbed the Sierras to the clouds, and looked down upon summer-clad California. And I will remark here, in passing, that all scenery in California requires distance to give it its highest charm. The mountains are imposing in their sublimity and their majesty of form and altitude, from any point of view—but one must have distance to soften their ruggedness and enrich their tintings; a Californian forest is best at a little distance, for there is a sad poverty of variety in species, the trees being chiefly of one monotonous family—redwood, pine, spruce, fir—and so, at a near view there is a wearisome sameness of attitude in their rigid arms, stretched down ward and outward in one continued and reiterated appeal to all men to “Sh!—don’t say a word!—you might disturb somebody!” Close at hand, too, there is a reliefless and relentless smell of pitch and turpentine; there is a ceaseless melancholy in their sighing and complaining foliage; one walks over a soundless carpet of beaten yellow bark and dead spines of the foliage till he feels like a wandering spirit bereft of a footfall; he tires of the endless tufts of needles and yearns for substantial, shapely leaves; he looks for moss and grass to loll upon, and finds none, for where there is no bark there is naked clay and dirt, enemies to pensive musing and clean apparel. Often a grassy plain in California, is what it should be, but often, too, it is best contemplated at a distance, because although its grass blades are tall, they stand up vindictively straight and self-sufficient, and are unsociably wide apart, with uncomely spots of barren sand between. 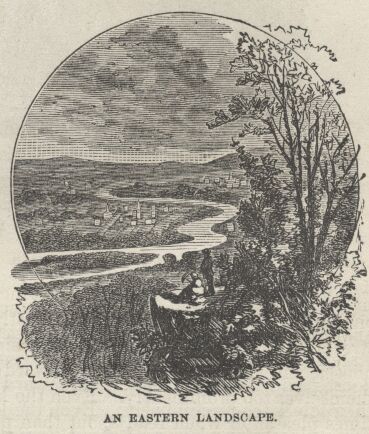 One of the queerest things I know of, is to hear tourists from “the States” go into ecstasies over the loveliness of “ever-blooming California.” And they always do go into that sort of ecstasies. But perhaps they would modify them if they knew how old Californians, with the memory full upon them of the dust-covered and questionable summer greens of Californian “verdure,” stand astonished, and filled with worshipping admiration, in the presence of the lavish richness, the brilliant green, the infinite freshness, the spend-thrift variety of form and species and foliage that make an Eastern landscape a vision of Paradise itself. The idea of a man falling into raptures over grave and sombre California, when that man has seen New England’s meadow-expanses and her maples, oaks and cathedral-windowed elms decked in summer attire, or the opaline splendors of autumn descending upon her forests, comes very near being funny—would be, in fact, but that it is so pathetic. No land with an unvarying climate can be very beautiful. The tropics are not, for all the sentiment that is wasted on them. They seem beautiful at first, but sameness impairs the charm by and by. Change is the handmaiden Nature requires to do her miracles with. The land that has four well-defined seasons, cannot lack beauty, or pall with monotony. Each season brings a world of enjoyment and interest in the watching of its unfolding, its gradual, harmonious development, its culminating graces—and just as one begins to tire of it, it passes away and a radical change comes, with new witcheries and new glories in its train. And I think that to one in sympathy with nature, each season, in its turn, seems the loveliest.

I have elsewhere spoken of the endless Winter of Mono, California, and but this moment of the eternal Spring of San Francisco. Now if we travel a hundred miles in a straight line, we come to the eternal Summer of Sacramento. One never sees Summer-clothing or mosquitoes in San Francisco—but they can be found in Sacramento. Not always and unvaryingly, but about one hundred and forty-three months out of twelve years, perhaps. Flowers bloom there, always, the reader can easily believe—people suffer and sweat, and swear, morning, noon and night, and wear out their stanchest energies fanning themselves. It gets hot there, but if you go down to Fort Yuma you will find it hotter. Fort Yuma is probably the hottest place on earth. The thermometer stays at one hundred and twenty in the shade there all the time—except when it varies and goes higher. It is a U.S. military post, and its occupants get so used to the terrific heat that they suffer without it. There is a tradition (attributed to John Phenix [It has been purloined by fifty different scribblers who were too poor to invent a fancy but not ashamed to steal one.—M. T.]) that a very, very wicked soldier died there, once, and of course, went straight to the hottest corner of perdition,—and the next day he telegraphed back for his blankets. There is no doubt about the truth of this statement—there can be no doubt about it. I have seen the place where that soldier used to board. In Sacramento it is fiery Summer always, and you can gather roses, and eat strawberries and ice-cream, and wear white linen clothes, and pant and perspire, at eight or nine o’clock in the morning, and then take the cars, and at noon put on your furs and your skates, and go skimming over frozen Donner Lake, seven thousand feet above the valley, among snow banks fifteen feet deep, and in the shadow of grand mountain peaks that lift their frosty crags ten thousand feet above the level of the sea.

There is a transition for you! Where will you find another like it in the Western hemisphere? And some of us have swept around snow-walled curves of the Pacific Railroad in that vicinity, six thousand feet above the sea, and looked down as the birds do, upon the deathless Summer of the Sacramento Valley, with its fruitful fields, its feathery foliage, its silver streams, all slumbering in the mellow haze of its enchanted atmosphere, and all infinitely softened and spiritualized by distance—a dreamy, exquisite glimpse of fairyland, made all the more charming and striking that it was caught through a forbidden gateway of ice and snow, and savage crags and precipices.

390.7–8 some of us have swept around snow-walled curves of the Pacific Railroad in that vicinity] Clemens made the round trip from Sacramento to Virginia City and back on the Central Pacific Railroad in late April and early May 1868, traversing Donner Pass—where the track was not yet completed—by horse-drawn sleigh (L2, 211–14).