The Valley of the Little Blue

The Valley of the Little Blue, 9th August

A little after midnight we resumed our way, and in the state which Mohammed described when he made his famous night journey to heaven --bayni 'l naumi wa 'l yakzan, -- we crossed the deep shingles, the shallow streams, and the heavy vegetation, of the Little Sandy, and five miles beyond it we forded the Big Sandy. About early dawn we found ourselves at another station, better than the last only as the hour was more propitious. The colony of Patlanders rose from their beds without a dream of ablution, and clearing the while their lungs of Cork brogue, prepared a neat déjeûner à la fourchette by hacking "fids" off half a sheep suspended from the ceiling, and frying them in melted tallow. Had the action occurred in Central Africa, among the Esquimaux or the Araucanians, it would not have excited my attention: mere barbarism rarely disgusts; it is the unnatural cohabitation of civilization with savagery that makes the traveler's gorge rise.

Issuing from Big Sandy Station at 6:30 AM, and resuming our route over the divide that still separated the valleys of the Big Blue and the Little Blue, we presently fell into the line of the latter and were called upon by the conductor to admire it.  It is pretty, but its beauties require the cosmetic which is said to act unfailingly in the case of fairer things, -- the viewer should have lately spent three months at sea, out of sight of rivers and women. Averaging two miles in width, which shrinks to one quarter as you ascend, the valley is hedged on both sides by low rolling bluffs or terraces, the boundaries of its ancient bed and modern debordements. As the hills break off near the river, they show a diluvial formation; in places they are washed into a variety of forms, and being white, they stand out in bold relief. In other parts they are sand mixed with soil enough to support a last-year's growth of wheat-like grass, weed stubble, and dead trees, that look like old corn fields in new clearings. One could not have recognized, at this season, Colonel Frémont's description written in the month of June --  the "hills with graceful slopes looking uncommonly green and beautiful." Along the bluffs the road winds, crossing at times a rough projecting spur, or dipping into some gully washed out by the rains of ages. All is barren beyond the garden-reach which runs along the stream; there is not a tree to a square mile, --  in these regions the tree, like the bird in Arabia, and the monkey in Africa, signifies water, -- and animal life seems well nigh extinct. As the land sinks toward the river bottom it becomes less barren. The wild sunflower (Helianthus) -- it seldom, however, turns toward the sun --  now becomes abundant;  it was sparse near the Missouri;  it will wax even more plentiful around Great Salt Lake City, till walking through the beds becomes difficult.  In size it greatly varies according to the quality of the soil, six feet is perhaps the maximum.  It is a growth of some value. The oleaginous seeds form the principal food of half starved Indians, while the stalks supply them with a scanty fuel: being of rapid growth, it has been used in the States to arrest the flow of malaria, and it serves as house and home to the rattlesnake. Conspicuous by its side is the sumach, whose leaf mixed with kinnikinik, the peel of the red willow, forms the immemorial smoking material of the Wild Man of the North. Equally remarkable for their strong odor, are large beds of wild onions;  they are superlatively wholesome, but they affect the eater like those of Tibet. The predominant colors are pink and yellow, the former, a lupine, the latter, a shrub locally called the rabbit-bush. The blue lupine also appears with the white mallow, the eccentric putoria, and the taraxacum (dandelion), so much used as salad in France and in the Eastern States. This land appears excellently adapted for the growth of manioc or cassava. In the centre of the bottom flows the brownish stream, about twenty yards wide, between two dense lines of tall sweet cottonwood. The tree which was fated to become familiar to us during our wanderings, is a species of poplar (P . monilifera),  called by the Americo-Spaniards, and by the people of Texas and New Mexico, "Alamo:" resembling the European aspen, without its silver lining, the color of the leaf, in places, appears of a dull burnished hue, in others bright and refreshingly green, Its trivial name is derived, according to some, from the fibrous quality of the bark, which, as in Norway, is converted into food for cattle and even man;  according to others, from the cotton-like substance surrounding the seeds. It is termed "sweet" to distinguish it from a different tree with a bitter bark, also called a cottonwood or narrow-leaved cotton wood (Populus angustifolia), and by the Canadians liard amère. The timber is soft and easily cut; it is in many places the only material for building and burning, and the recklessness of the squatters has already shortened the supply.

This valley is the Belgium of the adjoining tribes, the once terrible Pawnees, who here met their enemies, the Dakotahs and the Delawares; it was then a great buffalo ground; and even twenty years ago it was well stocked with droves of wild horses, turkeys, and herds of antelope, deer, and elk. The animals have of late migrated westward, carrying off with them the "bones of contention." Some details concerning the present condition of these bands and their neighbors may not be uninteresting -- these poor remnants of nations which once kept the power of North America at bay, and are now barely able to struggle for existence.

Native Americans from the Valley of the Little Blue

This valley is the Belgium of the adjoining tribes, the once terrible Pawnees, who here met their enemies, the Dakotahs and the Delawares: it was then a great buffalo ground; and even twenty years ago it was well stocked with droves of wild horses, turkeys, and herds of antelope, deer, and elk .

Burton, Richard. 1861. The City Of The Saints. London: Longman, Green, Longman, and Roberts.

By and by we passed through…

By and by we passed through Marysville, and over the Big Blue and [Little Sandy; thence about a mile, and entered Nebraska. About a mile further on, we came to the Big Sandy]—one hundred and eighty miles from St. Joseph.

[12.18–19 Little Sandy . . . Big Sandy] Actually, the trail crossed Little Sandy Creek about twenty-five miles beyond the Nebraska border, and then, another three miles or so further on, Big Sandy Creek. Clemens’s memory of this section of the route was not helped by Orion’s journal, which made no mention of the river crossings   Chapter 3: note for 12.18–19," in Roughing It : an electronic text. 2016 ]

As the sun was going down, we saw the first specimen of an animal known familiarly over two thousand miles of mountain meditation.and desert—from Kansas clear to the Pacific Ocean—as the “jackass rabbit.” He is well named. He is just like any other rabbit, except that he is from [one-third] to twice as large, has longer legs in proportion to his size, and has the most preposterous ears that ever were mounted on any creature but a jackass. When he is sitting quiet, thinking about his sins, or is absent-minded or unapprehensive of danger, his majestic ears project above him conspicuously; but the breaking of a twig will scare him nearly to death, and then he tilts his ears back[begin page 13]gently and starts for home. All you can see, then, for the next minute, is his long gray form stretched out straight and “streaking it” through the low sage-brush, head erect, eyes right, and ears just canted a little to the rear, but showing you where the animal is, all the time, the same as if he carried a jib. Now and then he makes a marvelous spring with his long legs, high over the stunted sage-brush, and scores a leap that would make a horse envious. Presently he comes down to a long, graceful “lope,” and shortly he mysteriously disappears. He has crouched behind a sage-bush, and will sit there and listen and tremble until you get within six feet of him, when he will get under way again. But one must shoot at this creature once, if he wishes to see him throw his heart into his heels, and do the best he knows how. He is frightened clear through, now, and he lays his long ears down on his back, straightens himself out like a yard-stick every spring he makes, and scatters miles behind him with an easy indifference that is enchanting. 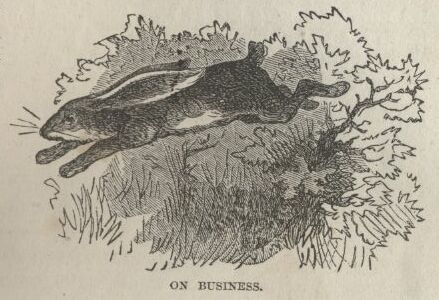 Our party made this specimen “hump himself,” as the conductor said. The [Secretary] started him with a shot from the Colt; I commenced spitting at him with my weapon; and all in the same instant the old “Allen’s” whole broadside let go with a rattling crash, and it is not putting it too strong to say that the rabbit was frantic! He dropped his ears, set up his tail, and left for San Francisco at a speed which can only be described as a flash and a vanish! Long after he was out of sight we could hear him whiz.