Twain, in a letter to William Dean Howell, describes his journey from Hamburg to Heidelberg as "...fooling along, 4 hours per day by rail, with a courier, spending the other 20 in hotels whose enormous bedchambers & private parlors are an overpowering marvel to me." He is not particularly detailed about his itinerary, however. The letter was posted from Frankfurt on the Main, 4 May 1878, near the end of the journey. He does mention that the "Day before yesterday" they were in Cassel. A note in "Notebooks & Journals" Vol II mentions they stopped briefly in Hanover and Wilhelmshöhe. His own notes describes the scarred faces of students in Göttingen. He spends a great deal of time in his book "A Tramp Abroad" describing the student duels from which such scars are gained - badges of honor. From this I hypothesize that the family's first day of travel was between Hamburg and Hanover (approx. 99 miles). The next day, from Hanover, they rode past the Harz Mountains to the northeast and stopped at Göttingen. From there, the third day would have been to Cassel with an excursion to Wilhelmshöhe. It's possible they spent two nights in Cassel, devoting a day to the Wilhelmshöhe visit. The journey from Cassel to Frankfurt is approximately 120 miles, likely too far for a 4 hour travel day. I can find no mention of a stop between these towns but Marburg may be a possible stop over. The section from Frankfurt to Heidelberg is only 47 miles, easily within the 4 hour limit. 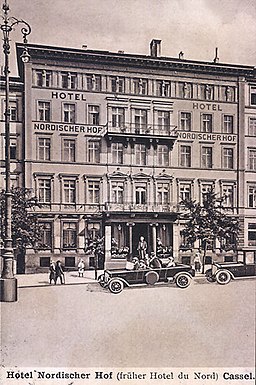 After leaving Hamburg, the Clemens party traveled by rail to Heidelberg, stopping briefly in Hanover, Wilhelmshohe, Cassel, and Frankfort on the Main. The prettiest effect is a cloud-ceiling in fresco in our parlor at Frankfort. German cleanliness reaches an altitude to which we may not aspire. These peasants are as cleanly in their houses as the Yankee of romance & more cleanly than the reality.

The Main-Neckar Railway (German: Main-Neckar–Eisenbahn, MNE) is a main line railway west of the Odenwald in the Upper Rhine Plain of Germany that connects Frankfurt am Main to Heidelberg via Darmstadt, Bensheim and Weinheim. It was opened in 1846 and is one of the oldest railways in Germany.

The Main-Neckar Railway was built and operated as a joint state railway company, known as a condominium railway (Kondominalbahn), by the Free City of Frankfurt, The Grand Duchy of Hesse-Darmstadt and the Grand Duchy of Baden.