Resuming, through air refrigerated by rain, our now weary way, we reached at 6 AM a favorite camping ground, the "Big Nemehaw" Creek, which, like its lesser neighbor, flows after rain into the Missouri River, via Turkey Creek, the Big Blue, and the Kansas. It is a fine bottom of rich black soil, whose green woods at that early hour were wet with heavy dew, and scattered over the surface lay pebbles and blocks of quartz, and porphyritic granites. "Richland," a town mentioned in guide books, having disappeared, we drove for breakfast to Seneca, a city consisting of a few shanties, mostly, garnished with tall square lumber fronts, ineffectually, especially when the houses stand one by one, masking the diminutiveness of the buildings behind them. The land, probably in prospect of a Pacific Railroad, fetched the exaggerated price of $20 an acre, and already a lawyer has "hung out his shingle" there.

Refreshed by breakfast and the intoxicating air, brisk as a bottle of veuve Clicquot, -- it is this that gives one the "prairie fever," -- we bade glad adieu to Seneca, and prepared for another long stretch of twenty four hours.

Passing through Ash Point at 9:30 AM, and halting for water at Uncle John's Grocery, where hang-dog Indians squatting, standing, and stalking about, showed that the forbidden luxury -- essence of corn, was, despite regulations, not unprocurable there, we spanned the prairie to Guittard's Station.

Burton, Richard. 1861. The City Of The Saints. London: Longman, Green, Longman, and Roberts.

Our coach was a great… 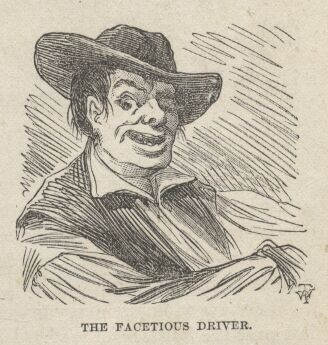 Our coach was a great swinging and swaying stage, of the most sumptuous description—[an imposing cradle on wheels]. It was drawn by six handsome horses, and by the side of the driver sat the “conductor,” the legitimate captain of the craft; for it was his business to take charge and care of the mails, baggage, express matter, and passengers. We three were the only passengers, this trip. We sat on the back seat, inside. the facetious driver.About all the rest of the coach was full of [mail-bags]—for [we had three days’ delayed mails with us]. Almost touching our knees, a perpendicular wall of mail matter rose up to the roof. There was a great pile of it strapped on top of the stage, and both the fore and hind boots were full. We had twenty-seven hundred pounds of it aboard, the driver said—“a little for Brigham, and Carson, and ’Frisco, but the heft of it for the Injuns, which is powerful troublesome ’thout they get plenty of truck to read.” But as he just then got up a fearful convulsion of his countenance which was suggestive of a wink being swallowed by an earthquake, we guessed that his remark was intended to be facetious, and to mean that [we would unload the most of our mail matter somewhere on the Plains] and leave it to the Indians, or whosoever wanted it.