Introduction: Roughing It and The City of the Saints

Tuesday 7th August 1860,  Richard F. Burton starts out on a stagecoach journey to Salt Lake City and on to Carson City.   July 26th of 1861, Samuel L. Clemens and his brother Orion start out along the same route.

This section on Mark Twain's journey to "The West" covers all the known Overland Coach and Pony Express Stations between St. Joseph, Missouri and Fort Laramie, on the eastern edge of the Rocky Mountains.  The display map may be enlarged and the map symbols are clickable - linked to discussions of each of the stations or area in the vicinity of the reported station.  These discussion consist of remarks made by Twain, as found in his book "Roughing It" as well as notes made by his brother, Orion Clemens, and descriptions of the stations and areas taken from Richard Burton's book "The City of the Saints".  They also contain information from a report written for the National Parks Service, and from additional web sites.

Another night of alternate tranquillity and turmoil. But morning came, by and by. It was another glad awakening to fresh breezes, vast expanses of level greensward, bright sunlight, an impressive solitude utterly without visible human beings or human habitations, and an atmosphere of such amazing magnifying properties that trees that seemed close at hand were more than three mile away. We resumed undress uniform, climbed a-top of the flying coach, dangled our legs over the side, shouted occasionally at our frantic mules, merely to see them lay their ears back and scamper faster, tied our hats on to keep our hair from blowing away, and leveled an outlook over the world-wide carpet about us for things new and strange to gaze at. Even at this day it thrills me through and through to think of the life, the gladness and the wild sense of freedom that used to make the blood dance in my veins on those fine overland mornings!"
(Roughing It)

Included from Burton's book are critiques of the Overland Coach stations and other stops,  descriptions of the Missouri River Valley, the Western Prairie (west of the Mississippi); the valley of the Little Blue and its divide from the Platte River;  and, the Platte River to Fort Kearney.  After Fort Kearney, the nature of the landscape changes and we find buffalo and artemisia.  Burton describes a section of trail he shared with a group of Indians moving their village.  Passing by Julesburg, or Overland City, the country changes from the civilized world to wilderness.  Here the road splits between one route leading to Denver and the other to Salt Lake City and over the Rocky Mountains.  Both Burton and Twain find prairie dogs.  Burton also discusses antelope, deer and locusts.  He relates tales told by M. Reynal, the station keeper at Horse Creek Station,  and provides a short dissertation on the nature of Indian villages.

Following Burton's discussion of life at Horseshoe Station, the home of Slade, (which I've included in the lesson section on crossing the Rockies), he includes an entire chapter on the ethnology of the "Sioux or Dakotahs".  This material has not been included here but I highly recommend reading.  Burton's observations are astute though his analysis is firmly rooted in his Occidentalism.  He does credit other sources for much of his supporting information.

In working up this book I have freely used authorities well known across the water, but more or less rare in England. The books principally borrowed from are "The Prairie Traveler," by Captain Marcy; "Explorations of Nebraska," by Lieutenant GA Warren; and Mr Bartlett's "Dictionary of Americanisms." To describe these regions without the aid of their first explorers, Messrs. Fremont and Stansbury, would of course have been impossible. If I have not always specified the authority for a statement, it has been rather for the purpose of not wearying the reader by repetitions than with the view of enriching my pages at the expense of others.

As all the world knows, there are three main lines proposed for a "Pacific Railroad," between the Mississippi and the Western Ocean, the Northern, Central, and Southern.

The United States territory lying in direct line between the Mississippi River and the Pacific Ocean is now about 1,200 miles long from north to south, by 1,500 of breadth, in 49d and 32d N lat. about equal to Equatorial Africa, and 1,800 in N lat 38d. The great uncultivable belt of plain and mountain region through which the Pacific Railroad must run, has a width of 1,100 statute miles near the northern boundary; in the central line, ,1200; and through the southern, 1,000.

Precisely at 8 AM appeared in front of the Patee House - the Fifth Avenue Hotel of St Jo - the vehicle destined to be our home for the next three weeks. We scrutinized it curiously. 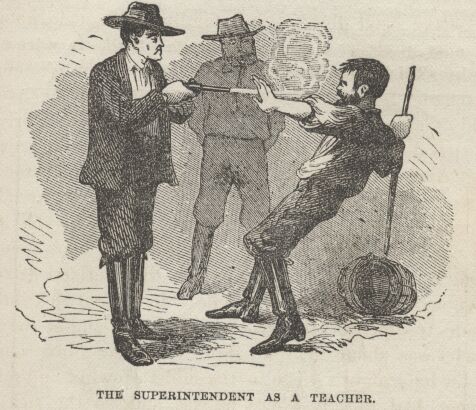 "Over each two hundred and fifty miles of road they placed an agent or superintendent, and invested him with great authority.

Native Americans in the Nebraska Territory

Here we have the status of "assimilation of American Indians" as seen by Richard F. Burton circa 1860:

In 1854, when Nebraska was admitted into the Union, there were, as nearly as can be estimated, 10,000 Indians on reservation & in the Territory, the greater portion of them living in the eastern part, in permanent villages, along the Missouri and Platte Rivers, and their tributaries, while in the northwestern part there were several roving bands of the great Sioux nation, of whom those in the eastern part stood in mortal fear.