We are not infatuated with these French railway cars, though. We took first-class passage, not because we wished to attract attention by doing a thing which is uncommon in Europe but because we could make our journey quicker by so doing. It is hard to make railroading pleasant in any country. It is too tedious. Stagecoaching is infinitely more delightful.

The cars are built in compartments that hold eight persons each. Each compartment is partially subdivided, and so there are two tolerably distinct parties of four in it. Four face the other four. The seats and backs are thickly padded and cushioned and are very comfortable; you can smoke if you wish; there are no bothersome peddlers; you are saved the infliction of a multitude of disagreeable fellow passengers. So far, so well. But then the conductor locks you in when the train starts; there is no water to drink in the car; there is no heating apparatus for night travel; if a drunken rowdy should get in, you could not remove a matter of twenty seats from him or enter another car; but above all, if you are worn out and must sleep, you must sit up and do it in naps, with cramped legs and in a torturing misery that leaves you withered and lifeless the next day—for behold they have not that culmination of all charity and human kindness, a sleeping car, in all France. I prefer the American system. It has not so many grievous “discrepancies.” 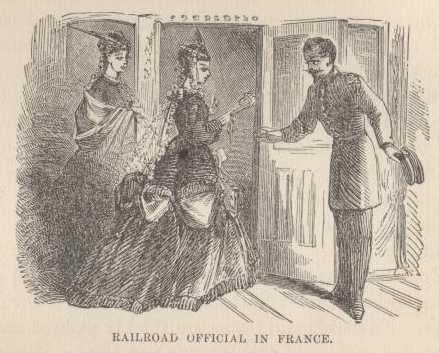 In France, all is clockwork, all is order. They make no mistakes. Every third man wears a uniform, and whether he be a marshal of the empire or a brakeman, he is ready and perfectly willing to answer all your questions with tireless politeness, ready to tell you which car to take, yea, and ready to go and put you into it to make sure that you shall not go astray. You cannot pass into the waiting room of the depot till you have secured your ticket, and you cannot pass from its only exit till the train is at its threshold to receive you. Once on board, the train will not start till your ticket has been examined—till every passenger’s ticket has been inspected. This is chiefly for your own good. If by any possibility you have managed to take the wrong train, you will be handed over to a polite official who will take you whither you belong and bestow you with many an affable bow. Your ticket will be inspected every now and then along the route, and when it is time to change cars you will know it. You are in the hands of officials who zealously study your welfare and your interest, instead of turning their talents to the invention of new methods of discommoding and snubbing you, as is very often the main employment of that exceedingly self-satisfied monarch, the railroad conductor of America.
But the happiest regulation in French railway government is—thirty minutes to dinner! No five-minute boltings of flabby rolls, muddy coffee, questionable eggs, gutta-percha beef, and pies whose conception and execution are a dark and bloody mystery to all save the cook that created them!
No, we sat calmly down—it was in old Dijon, which is so easy to spell and so impossible to pronounce except when you civilize it and call it Demijohn—and poured out rich Burgundian wines and munched calmly through a long table d’hote bill of fare, snail patties, delicious fruits and all, then paid the trifle it cost and stepped happily aboard the train again, without once cursing the railroad company. A rare experience and one to be treasured forever.
They say they do not have accidents on these French roads, and I think it must be true. If I remember rightly, we passed high above wagon roads or through tunnels under them, but never crossed them on their own level. About every quarter of a mile, it seemed to me, a man came out and held up a club till the train went by, to signify that everything was safe ahead. Switches were changed a mile in advance by pulling a wire rope that passed along the ground by the rail, from station to station. Signals for the day and signals for the night gave constant and timely notice of the position of switches.
No, they have no railroad accidents to speak of in France. But why? Because when one occurs, somebody has to hang for it! Not hang, maybe, but be punished at least with such vigor of emphasis as to make negligence a thing to be shuddered at by railroad officials for many a day thereafter. “No blame attached to the officers”—that lying and disaster-breeding verdict so common to our softhearted juries is seldom rendered in France. If the trouble occurred in the conductor’s department, that officer must suffer if his subordinate cannot be proven guilty; if in the engineer’s department and the case be similar, the engineer must answer.

By Lyons and the Saone (where we saw the lady of Lyons and thought little of her comeliness), by Villa Franca, Tonnere, venerable Sens, Melun, Fontainebleau, and scores of other beautiful cities, we swept, always noting the absence of hog-wallows, broken fences, cow lots, unpainted houses, and mud, and always noting, as well, the presence of cleanliness, grace, taste in adorning and beautifying, even to the disposition of a tree or the turning of a hedge, the marvel of roads in perfect repair, void of ruts and guiltless of even an inequality of surface—we bowled along, hour after hour, that brilliant summer day, and as nightfall approached we entered a wilderness of odorous flowers and shrubbery, sped through it, and then, excited, delighted, and half persuaded that we were only the sport of a beautiful dream, lo, we stood in magnificent Paris!