The Man in the White Suit 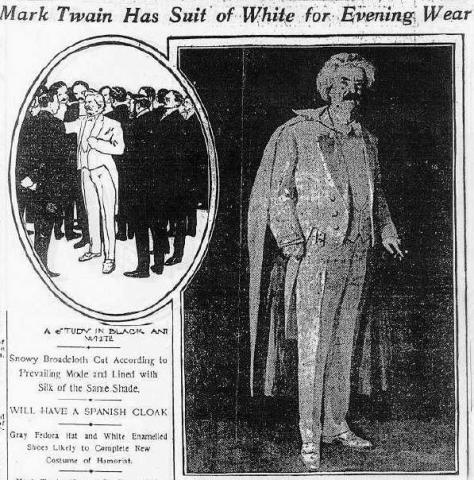 267.27  the New Hampshire hills] Clemens spent the summer of 1906 at Upton Farm, near Dublin, New Hampshire, dictating his autobiography.

December 7 Friday – Sam was in Washington, D.C., and spoke before the Joint Congressional Committee on Patents in favor of stronger copyright legislation. It was a cause Twain was long chasing. Shelden writes perhaps the most dramatic and telling account of his appearance in his white suit:

On a blustery Friday afternoon in December 1906, Mark Twain arrived for a special appearance at the Library of Congress, trailing smoke from his usual brand of cheap cigar. The temperature hovered at freezing and the skies were gloomy, but he was dressed warmly in a long dark overcoat and a derby from which thick curls of white hair protruded on either side. At the main doors, facing the Capitol, he entered the Great Hall of the Library and made his way down a long marble corridor to the Senate Reading Room, where a hearing was in progress on copyright legislation. The Librarian of Congress—a dapper middle-aged man named Herbert Putnam—was expecting him and emerged from the hearing to escort Twain inside.

All heads turned as the famous guest strode to the front of the chamber, which was full of lobbyists, lawyers, authors, and publishers. Normally used as a private study for senators, the high-ceilinged room had the look and feel of an elegant club…. At a long conference table facing the gathering were the dozen or so members of the Joint Congressional Committee on Patents, chaired by a jowly Republican lawyer from South Dakota, Senator Alfred Beard Kittredge.

…Twain reached his seat and paused to remove his overcoat. By this simple gesture he caused —as one observer later put it—“a perceptible stir.” That was an understatement. Against the fading light of the afternoon Twain emerged as a figure clothed all in white. His outfit perfectly matched his hair, from his white collar and cravat—held in place by a “creamy moonstone”—to his white shoes. Among so many soberly dressed fellows in black and gray, he stood out as a gleaming apparition, impossible to ignore [MTMW xvii-xviii]

William Dean Howells was in the audience. Shelden writes he was “so taken aback by this unconventional outfit that the first words from his mouth were ‘What in the world did he wear that white suit for?’” [ibid.]. Note: wearing white in the dead of winter was considered a shocking breach of etiquette, something Sam often relished doing. However, Twain received extensive press coverage for he flamboyant flaunting of such social norms. A composite of Sam’s speech based on several sources may be found in Fatout, MT Speaking p.533-39.

[I was unable to find an article or image from the referenced newspaper and I don't know who Shelden is.]

November 29, 1905 Tuesday – On or about this day Sam moved into his new home at 21 Fifth Avenue in N.Y.C. and daughter Jean arrived as well.

May 5, 1905  Friday – Sam left NYC with H.H. Rogers on the yacht Kanawha for Fairhaven, Mass. [Lyon’s journal #2 TS 17; Lyon’s journal May 7]. Note: Due to learning of Clara’s impending appendectomy, Sam may have stayed in NYC. Lyon wrote that he was in Fairhaven. If he did not go with Rogers, it is then evident that Lyon did not know this.

Clemens met biographer Albert Bigelow Paine in 1906 while living in New York City. He decided to purchase 195 acres of land in Redding where Paine lived,[1] purchasing his first parcel there March 24, 1906 and buying additional acreage in May and September that year.[2]

Seventh Trip: November 22 to Saturday December 18, 1909
“I haven’t been well for the past 5 months, & so I haven’t stirred from home,” Clemens wrote Dorothy Quick on November 18, “but now I’ve got to make a trip, by the doctor’s orders. I don’t want to. But I must obey, I suppose. I sail for Bermuda day after tomorrow, with my secretary Mr. Paine for company. Perhaps we shall be back by the middle of December.”

The Bermudian sailed on Wednesday. After the ship anchored at Hamilton on Friday, January 7, Clemens began the first of ninety-five days on the Islands, his longest stay. He wore a black mourning band on his left arm, and when he wrote Loomis that day from Bay House he used stationery bordered in black. “I have just arrived,” he said, “& am very much pleased with the weather.”