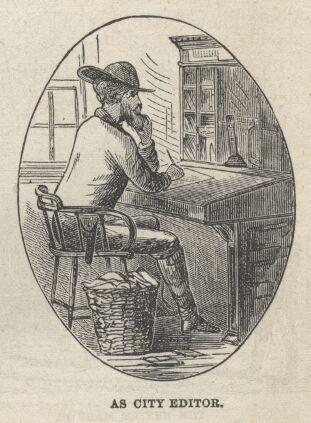 "I sat down, in the cabin, and gave myself up to solid misery—so to speak. Now in pleasanter days I had amused myself with writing letters to the chief paper of the Territory, the Virginia Daily Territorial Enterprise, and had always been surprised when they appeared in print. My good opinion of the editors had steadily declined; for it seemed to me that they might have found something better to fill up with than my literature. I had found a letter in the post office as I came home from the hill side, and finally I opened it. Eureka! [I never did know what Eureka meant, but it seems to be as proper a word to heave in as any when no other that sounds pretty offers.] It was a deliberate offer to me of Twenty-Five Dollars a week to come up to Virginia and be city editor of the Enterprise.
I would have challenged the publisher in the “blind lead” days—I wanted to fall down and worship him, now. Twenty-Five Dollars a week—it looked like bloated luxury—a fortune a sinful and lavish waste of money. But my transports cooled when I thought of my inexperience and consequent unfitness for the position—and straightway, on top of this, my long array of failures rose up before me. Yet if I refused this place I must presently become dependent upon somebody for my bread, a thing necessarily distasteful to a man who had never experienced such a humiliation since he was thirteen years old. Not much to be proud of, since it is so common—but then it was all I had to be proud of. So I was scared into being a city editor. I would have declined, otherwise. Necessity is the mother of “taking chances.” I do not doubt that if, at that time, I had been offered a salary to translate the Talmud from the original Hebrew, I would have accepted—albeit with diffidence and some misgivings—and thrown as much variety into it as I could for the money."

... when I came to Virginia in 1862 . . . forty dollars a week attached to it] Clemens arrived in Aurora, in the rich Esmeralda mining district claimed by both Nevada Territory and California, in April 1862. There, living hand to mouth, he immediately set about wielding pick and shovel while energetically speculating in mining “feet,” or shares, to the extent his limited funds allowed. That April he also began contributing letters, under the pen name “Josh,” to the Virginia City Territorial Enterprise. Before the end of July, partly on the strength of the “Josh” letters, none of which survive, he was offered the post of local reporter, as a temporary substitute for the paper’s local editor, William Wright (1829–98), best known under his pen name, “Dan De Quille.” By late September 1862, having failed to strike it rich in Aurora, Clemens had relocated to Virginia City and was reporting for the Enterprise. His earliest extant articles appeared in the paper on 1 October 1862 (see ET&S1, 389–91). He remained on the Enterprise staff until he left Virginia City for San Francisco in late May 1864. For his vivid accounts of his experiences in Aurora and Virginia City see his letters of the period (10? Apr 1862 to OC through 28 May 1864 to Cutler, L1, 184–301) and chapters 35–37, 40–49, 51–52, and 54–55 of Roughing It.

"Six months after my entry into journalism the grand “flush times” of Silverland began, and they continued with unabated splendor for three years. All difficulty about filling up the “local department” ceased, and the only trouble now was how to make the lengthened columns hold the world of incidents and happenings that came to our literary net every day. Virginia had grown to be the “livest” town, for its age and population, that America had ever produced. The sidewalks swarmed with people—to such an extent, indeed, that it was generally no easy matter to stem the human tide.

"San Francisco, a truly fascinating city to live in, is stately and handsome at a fair distance, but close at hand one notes that the architecture is mostly old-fashioned, many streets are made up of decaying, smoke-grimed, wooden houses, and the barren sand-hills toward the outskirts obtrude themselves too prominently. Even the kindly climate is sometimes pleasanter when read about than personally experienced, for a lovely, cloudless sky wears out its welcome by and by, and then when the longed for rain does come it stays.

By and by, an old friend of mine, a miner, came down from one of the decayed mining camps of Tuolumne, California, and I went back with him. We lived in a small cabin on a verdant hillside, and there were not five other cabins in view over the wide expanse of hill and forest. Yet a flourishing city of two or three thousand population had occupied this grassy dead solitude during the flush times of twelve or fifteen years before, and where our cabin stood had once been the heart of the teeming hive, the centre of the city.

Misery loves company. Now and then at night, in out-of-the way, dimly lighted places, I found myself happening on another child of misfortune. He looked so seedy and forlorn, so homeless and friendless and forsaken, that I yearned toward him as a brother. I wanted to claim kinship with him and go about and enjoy our wretchedness together.

Letters From the Sandwich Islands

After a three months’ absence, I found myself in San Francisco again, without a cent. When my credit was about exhausted, (for I had become too mean and lazy, now, to work on a morning paper, and there were no vacancies on the evening journals,) I was created San Francisco correspondent of the Enterprise, and at the end of five months I was out of debt, but my interest in my work was gone; for my correspondence being a daily one, without rest or respite, I got unspeakably tired of it. I wanted another change. The vagabond instinct was strong upon me.

From Hawaii Back to San Francisco

After half a year’s luxurious vagrancy in the islands, I took shipping in a sailing vessel, and regretfully returned to San Francisco—a voyage in every way delightful, but without an incident: unless lying two long weeks in a dead calm, eighteen hundred miles from the nearest land, may rank as an incident. Schools of whales grew so tame that day after day they played about the ship among the porpoises and the sharks without the least apparent fear of us, and we pelted them with empty bottles for lack of better sport.