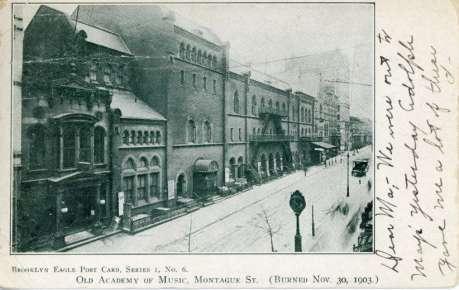 The Brooklyn Academy of Music (BAM) is a major performing arts venue in Brooklyn, New York City, known as a center for progressive and avant garde performance. It presented its first performance in 1861 and began operations in its present location in 1908.

Founded in 1861, the first BAM facility at 176-194 Montague Street in Brooklyn Heights was conceived as the home of the Philharmonic Society of Brooklyn. The building, designed by architect Leopold Eidlitz, housed a large theater seating 2,200, a smaller concert hall, dressing and chorus rooms, and a vast "baronial" kitchen. BAM presented amateur and professional music and theater productions, including performers such as Ellen Terry, Edwin Booth, Tomas Salvini, and Fritz Kreisler.

After the building burned to the ground on November 30, 1903, plans were made to relocate to a new facility in the then fashionable neighborhood of Fort Greene. The cornerstone was laid at 30 Lafayette Avenue in 1906 and a series of opening events were held in the fall of 1908 culminating with a grand gala evening featuring Geraldine Farrar and Enrico Caruso in a Metropolitan Opera production of Charles Gounod's Faust. The Met would continue to present seasons in Brooklyn, featuring star singers such as Caruso, right through until 1921.

The new building is adjacent to downtown Brooklyn, near the Atlantic Terminal of the Long Island Rail Road and the Williamsburgh Savings Bank Tower, once the tallest building in Brooklyn.  http://en.wikipedia.org/wiki/Brooklyn_Academy_of_Music

Excerpts from the Architectural Record, October 1908, on architect Leopold Eidiltz:

“The Academy of Music in Brooklyn was its author’s most important secular work up to that time. Confined to a single street front, parallel with the axis of the interior, it was an attempt, then novel on this side of the ocean and not common on the other, to express a theatre in its exterior.”

The opening night concert took place on Tuesday, January 15, 1861. In a speech to the audience, Samuel B. Chittendon, president of the Academy’s directorate, stated:

“Let me say here, that no one of us purposed to build a theatre, nor do we propose to allow this building to be used for theatrical purposes. But, we saw that we needed a large public building for our Philharmonic Society, operatic entertainments, concerts, lectures, our Horticultural Society’s flower shows and those exhibitions, in which the citizens of Brooklyn delight” (The Brooklyn Eagle, January 16, 1861).

A lengthy debate ensued with many people writing the local papers with their thoughts on theatrical performance in Brooklyn. Editorially the Brooklyn Eagle was staunchly pro-theatre. Finally on December 23, 1861, the Academy of Music presented Hamlet with E. L. Davenport in the title role and Julia Bennett Barrow as Ophelia.

“Shakespeare’s tragedy of Hamlet was performed at the Brooklyn Academy of Music last evening. We deem it proper here at the commencement to state the fact explicitly, in order that should the city be overwhelmed by an earthquake any time during the day there may be no mistake in attributing the visitation to the true cause.”

The Brooklyn Eagle, October 2, 1884, on the renovation of the Academy:

“The old Academy was in design and nature like the boy’s dog-pure mongrel. The design was supposed to be Morrish but wasn’t. There was much that was Moorish about it but that much was sadly marred by an intermingling of somber Dutch and heavy designs of the like.” \

On November 30, 1903, the Academy of Music was destroyed by fire.  https://theatretalks.wordpress.com/2011/12/13/brooklyn-academy-of-music-176-montague-street-brooklyn-new-york/