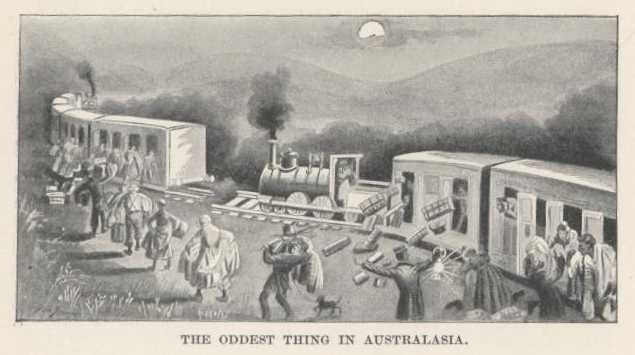 Albury /ˈɔːlbəri/[3] is a major regional city in New South Wales, Australia, located on the Hume Highway on the northern side of the Murray River. It is the seat of local government for the council area which also bears the city's name - the City of Albury. Albury has an urban population of 45,627 people.[1]

Albury is separated from its twin city in Victoria, Wodonga by the Murray River. Together, the two cities form an urban area with a population of more than 80,000.[4] It is 462 kilometres (287 mi) from the state capital Sydney and 326 kilometres (203 mi) from the Victorian capital Melbourne.[5]

Said to be named after a town in England, Albury developed as a major transport link between the colonies of New South Wales and Victoria and was proclaimed a city in 1946.
https://en.wikipedia.org/wiki/Albury

September 26 Thursday – At 5 a.m. in Albury, Australia, the Clemens party switched trains to a
different track gauge train for the remainder of the trip to Melbourne. On a “bitterly cold night,” Livy
had an attack of rheumatism.
MTDBD