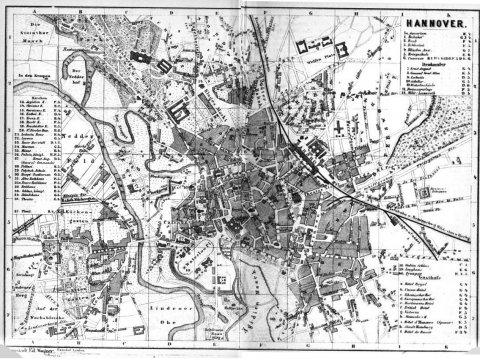 Omnibus. From the Bahnthor through the town to the suburb of Linden and back every hour in the forenoon every 1/2 hr in the afternoon fare 1 Sgr. -- Tramway projected.

Post Office adjoining the station. Telegraph Office, No 12, `am Bahnhof’.

Hanover (256 ft.), formerly the capital of the kingdom of Hanover, and now that of the Prussian province of that name, with 87,641 (or including the suburb of Linden 106,141) inhab., is situated in a well cultivated plain on both banks of the Leine, which here becomes navigable above the influx of its small tributary the Ihme. The town has rapidly increased during the last thirty or forty years (population in 1837 only 27,500) especially since its annexation to Prussia in 1866; and in consequence of its advantageous situation at the junction of several important railways it has lately become a thriving manufacturing place. The irregularly built old town still contains a number of antiquated houses of the 16th and 17th cent., while the new quarters on the N and E sides are remarkable for a simple and massive style of architecture peculiar to the place. Examples of this are the Museum, Lyceum, Ministerial Offices, Synagogue, Railway Offices, Bank, Packhof, Barracks in the Celler Strasse, and many private dwelling houses. For the latter, however, the Gothic and Renaissance styles are again coming into vogue.

In front of the Railway-Station rises an *Equestrian Statue of Ernest Augustus , in bronze, designed by Wolff, the king (d 1851) being represented in the uniform of a hussar. In the middle of the Theater-Platz, a short distance from the station, rises the

Theatre, one of the largest and finest in Germany, with seats for 1800 spectators. The principal façade towards the Georgs Strasse is adorned with a handsome portico, above which are placed statues of twelve celebrated poets and composers.

Opposite the theatre is the Polytechnic School in the Florentine style (265 students), containing various collections which may be visited daily on application to the custodian. -- In the Georgs-Platz, to the S. of the Theater-Platz is the Lyceum, built in 1854, in front of which rises a colossal Statue of Schiller erected in 1863.

The Museum of Art and Science, Sophien-Str. 2, completed in 1856 in the circular style contains the apartments of a Club of Artists and Architects on the ground-floor, and the Hanoverian Provincial Museum on the first floor, where annual exhibitions of art also take place in February and March. The collections, which relate to natural history, art, and historical research, are open 10--1 daily, except Frid., adm. 5 Sgr.; Sund. 11 -- 1 and Wed. 2 – 4 gratis.

The Natural History Collections on the first and second floor of the principal building are chiefly remarkable for the minerals, birds, and butterflies.

The Historical Collections in an adjoining building in the court are rich in ante-Christian antiquities, comprising about 1500 vases, some of them from Osnabrück stone monuments, and very rare; bronze weapons, ornaments, domestic utensils, gold and silver trinkets

A *Gallery of Pictures brought from different châteaux of George V. has recently been formed at Landschafts-Strasse 3, not far from the Museum (open daily custodian in the court to the r.).

In the centre of the Altstadt is the market place with the Marktkirche of the 14th cent. On the outside are several tombstones of the 16th cent. The interior, restored in 1855, contains fine modern stained glass and a modern altar carved in oak. Tower 297 ft high. The handsome old Rathhaus, erected in the late Gothic style in 1439–55, has a modern wing facing the Köbelinger Strasse.

The Markt-Strasse and Köbelinger Strasse running to the S from the market place and the Knochenhauer-Strasse and Schmiede-Strasse to the N., contain a number of picturesque late Gothic brick buildings with lofty gables, of the 15th and 16th cent. No 10 in the last named street, at the corner of the Kaiser Strasse, was once Leibnitz's House, a Renaissance building in stone, of 1652, with a jutty adorned with sixteen reliefs from Scripture. The neighbouring Kreuzkirche contains a good altar piece.

The Palace, an edifice of considerable extent, with its back to the Leine, is situated in the Lein-Strasse, to the SW of the market place. It was built about the middle of last century and altered in 1817. The interior (accessible daily 9--5 o’clock; entrance by Portal No 2) has recently been fitted up as an occasional residence for the Emperor and Empress of Germany. The chapel contains an altar piece by L. Cranach, representing the Crucifixion, and frescoes of the Ascension by Oesterley.

Opposite the palace is the Alte Palais, formerly the residence of King Ernest Augustus, To the 1., a short distance hence, at the corner of the Friedrichs-Strasse is the old palace of GeorgeV., now the Rathhaus .

At the back of the Palace flows the Leine, beyond which stretches an extensive drilling-ground termed the Waterloo-Platz, at the farther end of which rises the Waterloo-Column, 150 ft. in height, erected ‘by the grateful Fatherland’ to the Hanoverians who fell at the battle of Waterloo. Good survey of the town from the top. To the r. and 1. are barracks and to the l. is also the spacious Arsenal (1846). At the N. end is the Statue of Count Alten (d 1840), the Hanoverian general at Waterloo, and commander of the Foreign Legion in Spain. In the grounds between this and the barracks is a temple with a bust of Leibnitz (d 1716) who is interred in the neighbouring Neustädter Kirche. His grave is marked by a marble slab with the words ‘Ossa Leibnitii’.

The Poor House in the Neue Strasse bears an inscription to the effect that the Duke of Brunswick dined here (the house being then an inn) when on his expedition from the Erzgebirge to the North Sea.

The *Picture Gallery of King GeorgeV., Holzmarkt 4, contains a number of good works by Italian Flemish and Old German masters. The senator Herr Culemann, Oster-Str 54, possesses a collection of mediaeval works of art, autographs, early typography, etc., to which connoisseurs are readily admitted.

The *Aquarium (adm 5 Sgr.) near the Tivoli, and not far from the station, consists of 22 reservoirs of sea-water in a kind of subterranean grotto, lighted from above.

The Gewerbe-Ausstellung, or Industrial Exhibition, Georgs-Str. 34, consisting of machinery, manufactures, models, etc., is open daily 11-3 (adm 2 1/2 Sgr.) and in winter on Sund .also 6--8 (1 Sgr.). No 1 in the Lange Laube, the NE extension of the Georgs-Strasse, is the so called Haus der Väter.

The *Christuskirche, a handsome modern Gothic church, with good stained glass, is worthy of a visit (sacristan Oberstrasse 1).

An *Avenue of Limes, upwards of 1 M. long, leads on the NW side of the town to (1 1/2 M.) Schloss Herrenhausen. On the E. side of it is the imposing Welfenschloss, or Palace of the Guelphs, in the circular style, with five towers. The interior is unfinished. On the other side of the avenue is the Georgen-Park (with a café). Schloss Herrenhausen, at the farther end of the avenue was the favourite residence of George I (d 1727). George II (d 1766), and George V. The garden, 120 acres in area, is laid out in the French style, and contains an open air theatre, fountains, and hothouses. The jet of the principal fountain rises upwards of 100 ft. Adjoining the château is a building containing a Collection of Ancient and Modern Sculptures (among the former are busts of the emperors, Perseus and Andromeda, Bacchus, etc.; among the latter works by Rauch, Kümmel, Hesemann; and Engelhard). In the vicinity are two large orangeries and the beautiful Berggarten with palm, orchid, and Victoria Regia houses. The house formerly occupied by the superintendent of the gardens now contains the *Welfen-Museum, where national antiquities are preserved (open on Mond., Wed., Sund. 9--12 and 2–4). At the farther end of the garden is the Mausoleum containing the monuments of King Ernest Augustus (d 1851) and his Queen Frederica (d 1841) by Rauch (closed).

To the NE of Hanover, adjoining a handsome and well built quarter of the town extends the *Eilenriede, a wood belonging to the town affording beautiful walks (several cafés). On the S side of it,1 1/2 M. from the town, is situated the Zoological Garden with well kept grounds.

The Deer Park at Kirchrode (railway 2 1/2 Sgr.; carr. 1 Thir.) which contains tame deer, is much visited. Refreshments at the forester's house.

The *Marienburg at Nordstemmen, a château in the mediaeval style, not at present accessible, contains a frieze by Engelhard representing traditions of northern heroes, and pictures by Knille. Restaurant on the hill, commanding a fine view.