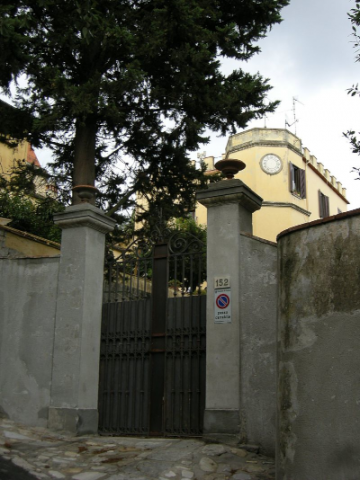 The Villa di Quarto is a historic landmark designated villa on via Pietro Dazzi in Florence, in the hilly zone at the foot of the Monte Morello. Quarto (fourth) is one of the toponyms relating to the Roman milestones, the most famous of which in this area is Sesto Fiorentino, of 45,000 inhabitants.

The villa was built in the 15th century and, after various changes of ownership, in 1613 it passed to the Pasquali family, who had it rebuilt by Alfonso Parigi, designer of the Boboli extension. In the 19th century the villa took on its present appearance - it then belonged to Jérôme Bonaparte, former king of Westphalia, who left it to his daughter Princess Mathilde Bonaparte, wife of the Russian nobleman and industrialist Anatoly Nikolaievich Demidov, 1st Prince of San Donato. The villa's many famous guests included the French historian and statistician Adolphe Thiers, though its most famous resident- and certainly the resident who wrote most about his stay there- was the author Mark Twain. In 1862, Grand Duchess Maria Nikolajevna Duchess of Leuchtenberg, daughter of Tsar Nicolai I., bought the Villa and filled it in the following years with works of art. Karl Eduard von Liphard was head of the circle of advisers around. Until her death in St. Petersburg in 1876 she bought lavishly. The Villa Quarto was inherited by her daughter Helena Countess Stroganov, from the second morganatic marriage to Belyakova, Zoia, Grand Duchess Maria Nikolajevna and her palace in St. Petersburg, London.