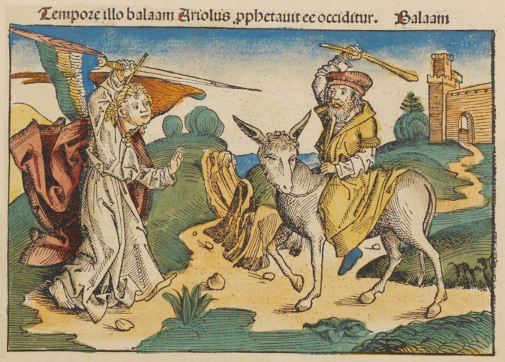 "Balaam's ass is quite unconnected with the geography of this episode but perhaps not with its theme. The ass helped his master discern whom he should curse, whom bless, taught him to choose the true chosen people (Numbers xxii). Whether or not that was Mark Twain's motive for pressing Balaam's ass into literary service, the beast serves well in the anti-pilgrim rhetoric: "Not content with doubling the legitimate stages, they switched off the main road and went away out of the way to visit an absurd fountain called Figia, because Baalam's ass had drank there once" (p. 453). And in the next chapter, Mark Twain presents an excerpt from what he claims is "the terse language of my note-book": "nooned an hour at the celebrated Baalam's Ass Fountain of Figia . . . guide-books do not say Baalam's ass ever drank there-somebody been imposing on the pilgrims, may be" (IA, Ch. 44, p. 454). Even as Bible-scholars, the pilgrims prove frauds."