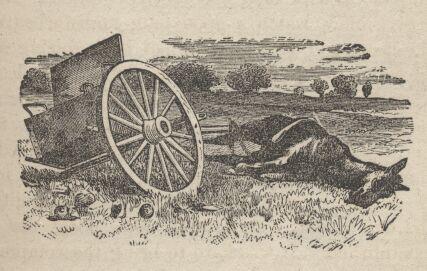 J.H. Simpson placed two mail stations in this area: the one at Fish Springs first used by Chorpenning and another about 3 ¼ miles north at Warm Springs. The station at Warm Springs was apparently abandoned because of bad water.

The original Chorpenning trail went south and west from Blackrock to where the salt-mud desert could be traversed. The trail then turned north to Fish Springs and passed Devil’s Hole, a local landmark. Later a better route was constructed across the flats on much the same route as the present road. This new route was used by the Express, stage and telegraph. From Fish Springs the Express rider would go over the pass just southwest of the station site, making the distance to Boyd’s Station about 9 miles. The stage freight, telegraph and Express (in bad weather) went around the north end of the Fish Springs Range making the trip about 14 miles. Through the years, Fish Springs, being about half-way between Rush Valley and Deep Creek, became a very prominent stop. In the latter part of the Nineteenth Century, John Thomas established a ranch near the station site and continued to serve the public. The Thomas Ranch buildings were torn down in the 1930′s and today only a foundation remains to mark the location of the ranch house. The site is located on the Fish Springs National Wildlife Refuge.

Fish Springs was the 21st contract station in Utah. Sharp mentions it as a home station. The area, named for the numerous small fish found in the abundant warm springs, has been an important oasis in the Great Basin desert since prehistoric times. Although the monument (N39 50 53.0 W113 24 39.0) was built adjacent to the road, the station stood a distance to the east, near the present-day camp ground. The best estimate places the old station just south and west of the big trees visible to the east, near what is called the House Spring. Simpson described a thatch-roofed shed on the site in 1859, but extensive development and activity at Fish Springs since the days of the Pony have rendered difficult any accurate interpretation of the its early appearance. Today, the station site and the surrounding area are a part of Fish Springs National Wildlife Refuge, administered by the U.S. Fish and Wildlife Service. The Refuge, established in 1959, covers almost 18,000 acres, including approximately 10,000 acres of marsh land. It serves as an important stop on the migration routes of thousands of birds from dozens of species, as well as a prime location for a variety of fields of wildlife research.

Fike and Headley identify this station ten miles from Black Rock Station. Sources generally list the station as Fish Springs, including the 1861 mail contract. Fike and Headley also add Smith Springs and Fresh Springs as alternative names. Named for the abundant small fish that lived in the warm mineral springs nearby, Raymond and Mary Settle list two men at the station, whereas Fike and Headley identify a Mr. Smith as the stationkeeper at the stone station. In later years John Thomas owned a ranch that included the station site. The ranch buildings stood until the 1930s, and the site existed in 1979 as part of the Fish Springs National Wildlife Refuge. The station's present-day status and condition are not known.

Beyond the sloughs we ascended a bench, and traveled on an improved road. We passed sundry circular ponds, garnished with rush; the water is sulphury, and according to the season is warm, hot, or cold. Some of these debord, and send forth what the So mal would call Biya Gora, "night flowing streams." About 3 AM, cramped with cold, we sighted the station, and gave the usual "Yep! yep!" A roaring fire soon revived us; the strong ate supper and the weak went to bed, thus ending a somewhat fatiguing day. (p 459-60)

To Willow Creek 30th September
On this line there are two kinds of stations; the mail station, where there is an agent in charge of five or six "boys," and the express station - every second - where there is only a master and an express rider. The boss receives $50 - $75 per mensem, the boy $35. It is a hard life, setting aside the chance of death - no less than three murders have been committed by the Indians during this year - the work is severe; the diet is sometimes reduced to wolf mutton, or a little boiled wheat and rye, and the drink to brackish water; a pound of tea comes occasionally, but the droughty souls are always "out" of whisky and tobacco. At Fish Springs, where there is little danger of savages, two men had charge of the ten horses and mules; one of these was a German Swiss, from near Schaffhausen, who had been digging for gold to little purpose in California.

A clear cool morning succeeding the cold night aroused us betimes. Nature had provided an ample supply of warm water, though slightly sulphury, in the neighboring pot holes, and at a little distance from the station was one conveniently cool. The fish from which the formation derives its name, is a perch-like species, easily caught on a cloudy day. The men, like the citizens of Suez, accustom themselves to the "rotten water," as strangers call it, and hardly relish the purer supplies of Simpson's Springs, or Willow Springs: they might have built the station about one mile north, near a natural well of good cool water, but apparently they prefer the warm bad.

The saleratus valley looked more curious in daylight than in moonlight. The vegetation was in regular scale; smallest, the rich bunch grass on the benches; then the greasewood and the artemisia, where the latter can grow; and largest of all, the dwarf cedar. All was of lively hue, the herbage bright red, yellow, and sometimes green, the shrubs were gray and glaucous, the cedars almost black, and the rim of hills blue-brown and blue. We had ample time to contemplate these curiosities, for Kennedy, whose wits, like those of Hiranyaka, the mouse, were mightily sharpened by the possession of wealth, had sat up all night and wanted a longer sleep in the morning. After a breakfast which the water rendered truly detestable, we hitched up about 10 AM and set out en route for Willow Springs.