Painted Post is a village in Steuben County, New York, United States. The village is in the town of Erwin, west of the city of Corning. The population was 1,842 at the 2000 census. The name comes from a painted and carved post found by explorers at the junction of three local rivers 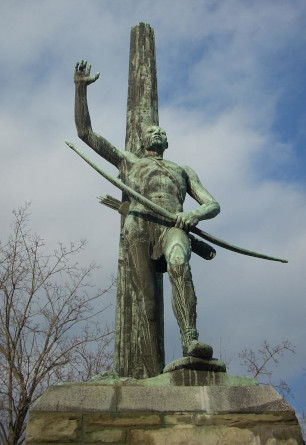 A momument placed at the confluence of three rivers: the Chemung, Tioga, and Cohocton. Known to all six nations, it is understood to be the burial place of some distinguished warrior who had been wounded in one of the border battles of the Revolutionary War and who died at this place. The post stood for many years after the settlement of the county but eventually it rotted down at the butt. It is said to have been preserved in the bar room of a tavern until about 1810 and then mysteriously disappeared. It is also said to have been swept away in a freshet.