Thursday, August 8, 1878 – Joe and Sam took the train up the river valley to Wimpfen.

When we got downtown I found that we could go by rail to within five miles of Heilbronn. The train was just starting, so we jumped aboard and went tearing away in splendid spirits. It was agreed all around that we had done wisely, because it would be just as enjoyable to walk DOWN the Neckar as up it, and it could not be needful to walk both ways. There were some nice German people in our compartment. I got to talking some pretty private matters presently, and Harris became nervous; so he nudged me and said:

I did so, it was well I did; for it turned out that there was not a German in that party who did not understand English perfectly. It is curious how widespread our language is in Germany. After a while some of those folks got out and a German gentleman and his two young daughters got in. I spoke in German of one of the latter several times, but without result. Finally she said:

"ICH VERSTEHE NUR DEUTCH UND ENGLISHE,"—or words to that effect. That is, "I don't understand any language but German and English."

And sure enough, not only she but her father and sister spoke English. So after that we had all the talk we wanted; and we wanted a good deal, for they were agreeable people. They were greatly interested in our customs; especially the alpenstocks, for they had not seen any before. They said that the Neckar road was perfectly level, so we must be going to Switzerland or some other rugged country; and asked us if we did not find the walking pretty fatiguing in such warm weather. But we said no.

We reached Wimpfen—I think it was Wimpfen—in about three hours, and got out, not the least tired; found a good hotel and ordered beer and dinner—then took a stroll through the venerable old village. It was very picturesque and tumble-down, and dirty and interesting. It had queer houses five hundred years old in it, and a military tower 115 feet high, which had stood there more than ten centuries. I made a little sketch of it. I kept a copy, but gave the original to the Burgomaster. 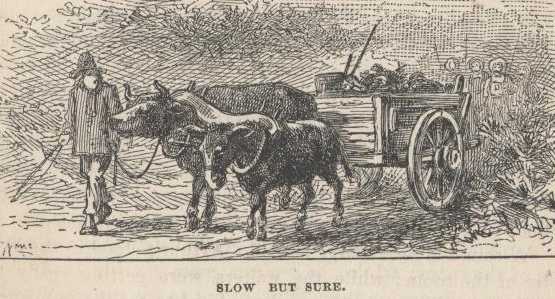 They started out on foot, and took a peasant’s cart seven more miles to Heilbronn [Rodney 103]. They browsed around the town and admired the old buildings. They ordered red wine at the Hotel zum Falkan but got something different. They discovered the label was wet and had just been applied. Sam wrote in his notebook “2000 labels sent to one American firm so they can furnish any wine desired.”

We had dinner under the green trees in a garden belonging to the hotel and overlooking the Neckar; then, after a smoke, we went to bed. We had a refreshing nap, then got up about three in the afternoon and put on our panoply. As we tramped gaily out at the gate of the town, we overtook a peasant's cart, partly laden with odds and ends of cabbages and similar vegetable rubbish, and drawn by a small cow and a smaller donkey yoked together. It was a pretty slow concern, but it got us into Heilbronn before dark—five miles, or possibly it was seven.

…heard the ¼ hours struck & the sweet trumpet blow, from 10.15 to 4.30. Got up in night to get my feather bed & barked my brow on an ornament of the tall stove. I could not do it justice, so said absolutely nothing.

The hotel about 300 years old is a comparatively modern building—but some of the stenches were quite old—they were antiques, I should say [131].