September 4 Wednesday – Sam and Joe set off [from Ouchy] on their last Alpine tramp. Bound for Chamonix, France, they took the train to Martigny, Switzerland, where they arrived at 9 PM and took rooms at the Hotel Clerc

September 5 Thursday – The two “tramps” left Martigny on foot at 8 AM, bound for Chamonix, nineteen uphill miles in the hot sun. They skirted the Tête Noir Mountain. Sam noted the beauty of Argientiere as they approached. They dined at Argientiere and hired a wagon for the last six miles into Chamonix.

In his notebook, Sam wrote: Driver very drunk but a good driver—went like the wind—said in French he was the King of drivers. The other chap, very drunk too (both good-natured) called himself the Captain of Mont Blanc—had made more ascents than any man–48 & his brother 37. He spoke German. Driver invited a nurse & baby in as we approached Chamounix . The men took rooms at the Hotel d’Angleterre. 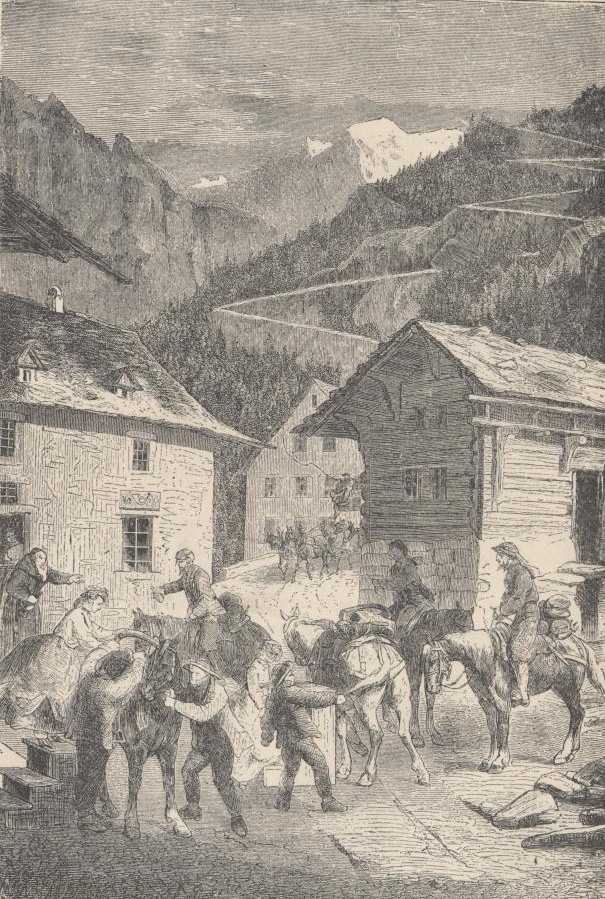 September 6 Friday – Sam and Joe took the one-day excursion recommended by the Baedecker travel guide, and climbed the Montanvert. From there they “crossed the Mer de Glace & ascended the confounded moraine.” Sam noted that the most delicious water he had in Europe was from the glacier. Sam’s smooth shoes made him uncomfortable on the ice and had a touch of acrophobia 70 feet above the glacier. It was an easy descent except for one trouble spot, the Mauvais Pas. By evening the men returned to their hotel. Sam “Looked at Jupiter & his moons thro’ telescope”.

Switzerland and the adjacent portions of Italy, Savoy and the Tyrol