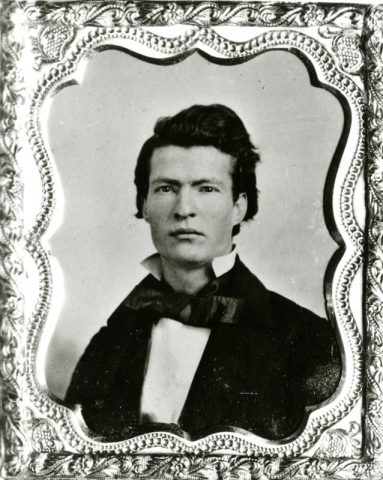 Sam Clemens departs his childhood home of Hannibal, Missouri and attempts to support himself as a type setter.  His travels take him to New York City, Philadelphia, Washington D.C. then back to Hannibal, Keokuk and Muscatine.  He eventually finds his way to Cincinnati, Ohio  where a new phase in his life is to begin on the Mississippi River

This may not be Sam's first departure from home. David Fears reports that in the summer of 1845 Sam stowed away on a steamboat headed south. He was found by a crew member and put ashore thirty miles down river, at the town of Louisiana, Mo. There he spent the night with Lampton relatives. The next day they returned him home.

May 26, 1853 Thursday– Sam was thinking about leaving Hannibal by this time, and New York may have already been his desired destination, but he spoke only of St. Louis to his mother.

Sometime in the first two weeks of June 1853, Samuel L. Clemens (aged seventeen) left his home and family in Hannibal, Missouri, for the first time, stopping initially in St. Louis and then going on to New York City, supporting himself as a journeyman printer in both places. Precisely when Clemens boarded the regular evening packet for St. Louis is not known: in his autobiography he said simply that he “disappeared one night and fled to St. Louis” . On 26 October 1853, however, he mentioned that he had first departed Hannibal “more than four months ago” . Since it would have been exactly four months on that day if he had left Hannibal on 26 June, Clemens himself seems to place his departure in the early weeks of that month.

August 19 to 24, 1853– At 8 AM, Friday Sam boarded a boat and started a journey by train and boat to New York. He did not tell his mother about the trip, which took about five days. From St. Louis to Alton, Ill, Springfield, Bloomington, Ind., LaSalle, Chicago, Monroe, Michigan on the Northern Indiana and Michigan Southern railroads. In his letter he wrote he traveled from Chicago to Monroe, Michigan, across Lake Erie to Buffalo, then to Albany and New York. Sam arrived in New York City at 5 AM with “two or three dollars in his pocket and a ten-dollar bill concealed in the lining of his coat”.

May 25 Wednesday – Sam wrote another “Assistant’s Column” in the Journal [MTL 1:2]. A notice first ran in the Journal: “WANTED! AN APPRENTICE OF THE PRINTING BUSINESS. APPLY SOON.” The ad ran for two weeks. Wecter concludes this date marked Sam’s departure from Hannibal [Wecter 263]. Sam had promised his mother that he would abstain from cards and liquor [Wecter 262]. By this time Sam was in St. Louis to find his way in the world. Paine writes he took a night boat to St. Louis. Sam likely stayed with his sister Pamela and found work as a typesetter.

It took a day, by steamboat and cars, to go from St.

Sam wrote his mother with a somewhat backhanded apology for shocking her at his destination. He then described an exhibit of what would later become “the wild men of Borneo,” and a brief mention of the Crystal Palace and the Marble Palace. Sam found lodging in a mechanics’ boarding house on Duane Street.

Description of the City:

His visit to Washington, D.C., probably lasted only a long weekend, from 16 through 20 February (or possibly through Washington’s birthday) 1854. He himself called his stay a “flying trip,” and Paine said that it “was comparatively brief, and he did not work there”

Editorial narrative following 17 and 18 February 1854 to the Muscatine Journal .

Return to the Mississippi River Valley

In 1906 Clemens described this return trip: “I went back to the Mississippi Valley, sitting upright in the smoking-car two or three days and nights. When I reached St. Louis I was exhausted. I went to bed on board a steamboat that was bound for Muscatine. I fell asleep at once, with my clothes on, and didnt’ wake again for thirty-six hours” .

Start for the Amazon

... Ward and I have held a long consultation, Sunday morning, and the result was that us two have determined to start to Brazil, if possible, in six weeks from now, in order to look carefully into matters there ... and report to Dr. Martin in time for him to follow on the first of March. We propose going via. New York. Now, between you and I and the fence you must say nothing about this to Orion, for he thinks that Ward is to go clear through alone, and that I am to stop at New York or New Orleans until he reports. But that don’t suit me.