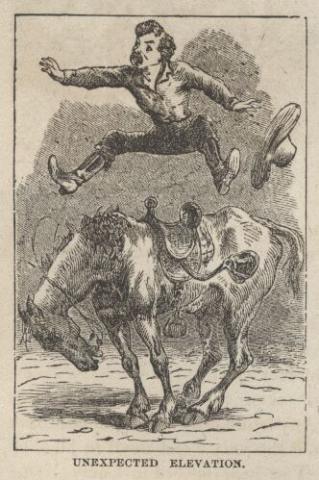 Samuel Langhorne Clemens had been a riverboat pilot from February of 1857 to May of 1861, primarily navigating the Lower Mississippi River from New Orleans to St. Louis. James Buchanan was president. Abraham Lincoln was inaugurated in March of 1861; Sam was renewing his pilots license; the Civil War broke out. By the end of April, Sam's career on the river was over. Lincoln appointed Orion Clemens, Sam's older brother, secretary of the new territorial government of Nevada. Three months after leaving the river Sam was on his way to Nevada on the Overland Stage from St. Joseph, Missouri to Carson City.

My brother had just been appointed Secretary of Nevada Territory—an office of such majesty that it concentrated in itself the duties and dignities of Treasurer, Comptroller, Secretary of State, and Acting Governor in the Governor’s absence. A salary of eighteen hundred dollars a year and the title of “Mr. Secretary,” gave to the great position an air of wild and imposing grandeur. I was young and ignorant, and I envied my brother. I coveted his distinction and his financial splendor, but particularly and especially the long, strange journey he was going to make, and the curious new world he was going to explore. He was going to travel! I never had been away from home, and that word “travel” had a seductive charm for me. Pretty soon he would be hundreds and hundreds of miles away on the great plains and deserts, and among the mountains of the Far West, and would see buffaloes and Indians, and prairie dogs, and antelopes, and have all kinds of adventures, and may be get hanged or scalped, and have ever such a fine time, and write home and tell us all about it, and be a hero. And he would see the gold mines and the silver mines, and maybe go about of an afternoon when his work was done, and pick up two or three pailfuls of shining slugs, and nuggets of gold and silver on the hillside. And by and by he would become very rich, and return home by sea, and be able to talk as calmly about San Francisco and the ocean, and “the isthmus” as if it was nothing of any consequence to have seen those marvels face to face.

Richard Francis Burton: English explorer, geographer, translator, writer, soldier, orientalist, cartographer, ethnologist, spy, linguist, poet, fencer, and diplomat; famed for his travels and explorations in Asia, Africa and the Americas, as well as his extraordinary knowledge of languages and cultures. According to one count, he spoke 29 European, Asian and African languages; traveled the same route just the year before. In his words:

A tour through the domains of Uncle Samuel without visiting the wide regions of the Far West, would be, to use a novel simile, like seeing Hamlet with the part of Prince of Denmark, by desire, omitted. Moreover, I had long determined, to add the last new name to the list of "Holy Cities;" to visit the young rival, soi-disant, of Memphis, Benares, Jerusalem, Rome, Meccah; and after having studied the beginnings of a mighty empire "in that New World which is the Old," to observe the origin and the working of a regular go-ahead Western and Columbian revelation. Mingled with the wish of prospecting the City of the Great Salt Lake in a spiritual point of view, of seeing Utah as it is, not as it is said to be, was the mundane desire of enjoying a little skirmishing with the savages, who in the days of Harrison and Jackson had given the pale faces tough work to do, and that failing, of inspecting the line of route which Nature, according to the general consensus of guide books, has pointed out as the proper, indeed the only practical direction for a railway between the Atlantic and the Pacific. The commerce of the world, the Occidental Press had assured me, is undergoing its grand climacteric: the resources of India and the nearer orient are now well nigh cleared of "loot," and our sons, if they would walk in the paths of their papas, must look to Cipangri and the parts about Cathay for their annexations .

The Man was ready, the Hour hardly appeared propitious for other than belligerent purposes. Throughout the summer of 1860 an Indian war was raging in Nebraska; the Comanches, Kiowas, and Cheyennes were "out;" the Federal government had dispatched three columns to the centres of confusion; intestine feuds among the aborigines were talked of; the Dakotah or Sioux had threatened to "wipe out" their old foe the Pawnee, both tribes being possessors of the soil over which the road ran. Horrible accounts of murdered post boys and cannibal emigrants greatly exaggerated, as usual, for private and public purposes, filled the papers, and that nothing might be wanting the following positive assertion (I afterward found it to be, as Sir Charles Napier characterized one of a Bombay editor's sayings "a marked and emphatic lie") was copied by full half the press:

"Mormon" had in fact become a word of fear; the Gentiles looked upon the Latter Day Saints much as our crusading ancestors regarded the "Hashshashiyun," whose name indeed was almost enough to frighten them. Mr Brigham Young was the "Shaykh-el-Jebel, the Old Man of the Hill redivivus, Messrs Kimball and Wells were the chief of his Fidawin, and "Zion on the tops of the mountains" formed a fair representation of Alamut.

"Going among the Mormons!" said Mr M--- to me at New Orleans; "they are shooting and cutting one another in all directions; how can you expect to escape?"

Another general assertion was that "White Indians," --those Mormons again!"-- had assisted the "Washoes," "Pah Utes" and "Bannacks" in the fatal affair near Honey Lake, where Major Ormsby, of the militia, a military frontier-lawyer, and his forty men, lost the numbers of their mess.

But sagely thus reflecting that "dangers which loom large from afar generally lose size as one draws near," that rumors of wars might have arisen, as they are wont to do, from the political necessity for another "Indian botheration," as editors call it; that Governor Cumming's name might have been used in vain, that even the President might not have been a Pope, infallible, and that the Mormons might turn out somewhat less black than they were painted: moreover, having so frequently and willfully risked the chances of an "I told you so" from the lips of friends, those "prophets of the past;" and, finally, having been so much struck with the discovery by some Western man of an enlarged truth, viz, that the bugbear approached has more affinity to the bug than to the bear, I resolved to risk the chance of the "red nightcap" from the bloodthirsty Indian and the poisoned bowie-dagger --without my Eleonora or Berengaria-- from the jealous Latter Day Saints. I forthwith applied myself to the audacious task with all the recklessness of a "party" from town precipitating himself for the first time into "foreign parts" about Calais

Let it be known, here at the outset, that neither Mr. Clemens nor Mr. Burton were ever under attack by American Indians; or Mormons, for that matter. If there is a preponderance of material from Richard F. Burton it is because I found him to be an impartial witness to conditions and features of the geography under examination. He had nothing to gain nor lose from his writing. He was a foreign observer with no agenda other than to explore this region. It is my intention to remain as close as possible to the time frames of Twain's visits. In this case, the first half of the 1860s decade.

Introduction: Roughing It and The City of the Saints

Tuesday 7th August 1860,  Richard F. Burton starts out on a stagecoach journey to Salt Lake City and on to Carson City.   July 26th of 1861, Samuel L. Clemens and his brother Orion start out along the same route.

This section on Mark Twain's journey to "The West" covers all the known Overland Coach and Pony Express Stations between St. Joseph, Missouri and Fort Laramie, on the eastern edge of the Rocky Mountains.  The display map may be enlarged and the map symbols are clickable - linked to discussions of each of the stations or area in the vicinity of the reported station.

From St. Louis to St. Joseph

Samuel L. Clemens and Richard Burton both took a steamboat from St. Louis to St. Joseph and neither had much to say about the trip. Burton does address the physical characteristics of the Mississippi River drainage basin and presents arguments as to why the Missouri River should not be considered as the Mississippi's headwaters.

Stagecoach Across the Plains

Stagecoach from St. Joseph, Missouri to the eastern base of the Rocky Mountains, Fort Laramie.

Stagecoach Over the Rockies

Wednesday, Aug. 7, 1861. Bathed in the warm spring. Mountains in the morning, Southwest and East enveloped in clouds. [Clemens]

"We arrived, disembarked, and the stage went on. It was a “wooden” town; its population two thousand souls. The main street consisted of four or five blocks of little white frame stores which were too high to sit down on, but not too high for various other purposes; in fact, hardly high enough. They were packed close together, side by side, as if room were scarce in that mighty plain.