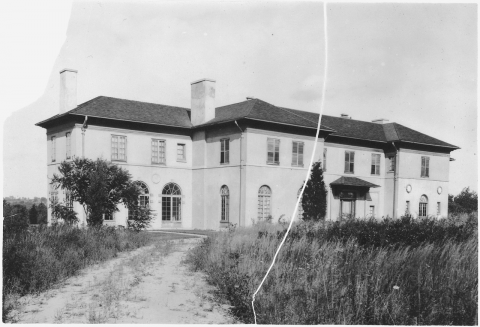 Clemens met biographer Albert Bigelow Paine in 1906 while living in New York City. He decided to purchase 195 acres of land in Redding where Paine lived,[1] purchasing his first parcel there March 24, 1906 and buying additional acreage in May and September that year.[2]

Clemens hired architect John Mead Howells of Howells & Stokes, son of the author William Dean Howells who was a friend and collaborator for 45 years.[3] Clemens stipulated the house should be built in the style of a Tuscan villa, after having lived at Villa Viviani (1891-92) in Settignano and Villa di Quarto (1903-04) in Sesto Fiorentino outside Florence, Italy.[4] Construction began in 1907; the project was nearly abandoned later that year due to cost and Clemens' misgivings about Redding's relative isolation, but the younger Howells convinced him that he would suffer a financial loss on work already underway.[5] The house was completed in June 1908,[1] built on elevated land known at the time as Birch Spray Hill on the west bank of the Saugatuck River.[6]

The exterior of the house featured a gray stucco finish and green-colored roof, with the foundation measuring 70 feet by 40 feet, flanked by wings measuring 20 feet by 18 feet.[7] Howells designed the interior ground floor to include a central dining room, opening onto garden terraces and a fountain. In one wing was a drawing room opening onto an outdoor seating area; the other wing contained a billiards room decorated with caricatures of Clemens.[4][6] The hand-carved mantel for the billiards room fireplace was a gift from the Sandwich Islanders. Twain had purchased a second, ornate mantel from Ayton Castle in Scotland that was installed in the living room; that mantel was damaged in the fire but restored, and is located today at the Mark Twain House & Museum in Hartford, Connecticut[8] where Clemens lived from 1874 to 1891.[9]

Residents of Redding met Clemens and Paine and Paine's daughter Louise at the West Redding train station on June 18, 1908 and accompanied them to the new house.[1] It was the first time that Clemens had seen the house in person.[4] Dan Beard was a nearby Redding resident whose illustrations appeared in several Mark Twain books. He helped set off fireworks to commemorate Clemens' arrival, describing a scene in which "sticks from the rockets fell in the pastures and sent the cattle and horses tearing around the fields."[6]

Mr. Paine spoke to me about a piece of land 75 acres with an old farm house on it in Redding,
Ct. where he recently bought a place—$2,000.00 is the price—and when I told Mr. Clemens
about it, he closed in with the idea as a good investment, and Mr. Paine has sent off the first
$100.00 to bind the bargain. I didn’t think he would want it because I couldn’t think he would
want anything that I want—with an aching heart. I reached out for that farm for I don’t ever
want to go back to Farmington again. I want & want & want to sell Choisy & so be able to
settle where there is more room—you can see for 20 miles. Life is such a tiny bubble that why
we reach out for material things I don’t know; but we do it and that old beamed farmhouse on
top of the hill held out its arms to me.