By and by, when we had approached to somewhere within thirty miles of Sydney Heads the great electric light that is posted on one of those lofty ramparts began to show, and in time the little spark grew to a great sun and pierced the firmament of darkness with a far-reaching sword of light.

Sydney Harbor is shut in behind a precipice that extends some miles like a wall, and exhibits no break to the ignorant stranger. It has a break in the middle, but it makes so little show that even Captain Cook sailed by it without seeing it. Near by that break is a false break which resembles it, and which used to make trouble for the mariner at night, in the early days before the place was lighted. It caused the memorable disaster to the Duncan Dunbar, one of the most pathetic tragedies in the history of that pitiless ruffian, the sea. The ship was a sailing vessel; a fine and favorite passenger packet, commanded by a popular captain of high reputation. She was due from England, and Sydney was waiting, and counting the hours; counting the hours, and making ready to give her a heart-stirring welcome; for she was bringing back a great company of mothers and daughters, the long-missed light and bloom of life of Sydney homes; daughters that had been years absent at school, and mothers that had been with them all that time watching over them. Of all the world only India and Australasia have by custom freighted ships and fleets with their hearts, and know the tremendous meaning of that phrase; only they know what the waiting is like when this freightage is entrusted to the fickle winds, not steam, and what the joy is like when the ship that is returning this treasure comes safe to port and the long dread is over.

On board the Duncan Dunbar, flying toward Sydney Heads in the waning afternoon, the happy home-comers made busy preparation, for it was not doubted that they would be in the arms of their friends before the day was done; they put away their sea-going clothes and put on clothes meeter for the meeting, their richest and their loveliest, these poor brides of the grave. But the wind lost force, or there was a miscalculation, and before the Heads were sighted the darkness came on. It was said that ordinarily the captain would have made a safe offing and waited for the morning; but this was no ordinary occasion; all about him were appealing faces, faces pathetic with disappointment. So his sympathy moved him to try the dangerous passage in the dark. He had entered the Heads seventeen times, and believed he knew the ground. So he steered straight for the false opening, mistaking it for the true one. He did not find out that he was wrong until it was too late. There was no saving the ship. The great seas swept her in and crushed her to splinters and rubbish upon the rock tushes at the base of the precipice. Not one of all that fair and gracious company was ever seen again alive. The tale is told to every stranger that passes the spot, and it will continue to be told to all that come, for generations; but it will never grow old, custom cannot stale it, the heart-break that is in it can never perish out of it.

There were two hundred persons in the ship, and but one survived the disaster. He was a sailor. A huge sea flung him up the face of the precipice and stretched him on a narrow shelf of rock midway between the top and the bottom, and there he lay all night. At any other time he would have lain there for the rest of his life, without chance of discovery; but the next morning the ghastly news swept through Sydney that the Duncan Dunbar had gone down in sight of home, and straightway the walls of the Heads were black with mourners; and one of these, stretching himself out over the precipice to spy out what might be seen below, discovered this miraculously preserved relic of the wreck. Ropes were brought and the nearly impossible feat of rescuing the man was accomplished. He was a person with a practical turn of mind, and he hired a hall in Sydney and exhibited himself at sixpence a head till he exhausted the output of the gold fields for that year.

According to an article NSW State Records, the ship was The Dunbar, not the Duncan Dunbar which wrecked off the coast of Brazil en route to Sydney. On the night of Thursday 20 August 1857, the clipper Dunbar approached the heads of Sydney Harbour after a voyage of 81 days. Launched in 1853, the vessel was owned by Duncan Dunbar, and was the sister ship of the Phoebe Dunbar, the Dunbar Castle and the Duncan Dunbar. Under the command of Captain Green, the Dunbar was on its second voyage to Sydney. Despite the treacherous weather conditions on the night, Captain Green and his crew attempted to enter Sydney Harbour that evening, rather than wait until morning. The Dunbar was driven into the reef at the foot of South Head and began to break up immediately. In the hours that followed, all but one of the passengers and crew perished. The survivor, Able Seaman James Johnson clung to a ledge on the cliff face until he was rescued on the morning of 22 August, some 36 hours after the Dunbar ran aground. When news of the wreck reached Sydney the following day, it immediately captured the attention of the public. In the days following, the media provided extensive coverage of the search for survivors and victims, and daily chronicled the progress of the inquest. Residents were drawn to the scene for the morbid task of identifying friends, relatives and business associates. Still only a relatively small town, Sydney was staggered by the enormity and proximity of the tragedy. A mass funeral for those who died and who, in most cases, could not be identified was held on 24 September. The interments took place at St. Stephen's Cemetery, Camperdown where there is still a monument to the victims. The wreck of the Dunbar lives on as one of the worst maritime disasters in Australia's history."

God made the Harbor, and that's all right; but Satan made Sydney.

We entered and cast anchor, and in the morning went oh-ing and ah-ing in admiration up through the crooks and turns of the spacious and beautiful harbor—a harbor which is the darling of Sydney and the wonder of the world. It is not surprising that the people are proud of it, nor that they put their enthusiasm into eloquent words. A returning citizen asked me what I thought of it, and I testified with a cordiality which I judged would be up to the market rate. I said it was beautiful—superbly beautiful. Then by a natural impulse I gave God the praise. The citizen did not seem altogether satisfied. He said: 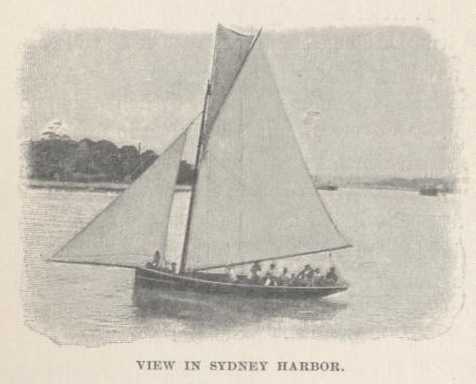 "It is beautiful, of course it's beautiful—the Harbor; but that isn't all of it, it's only half of it; Sydney's the other half, and it takes both of them together to ring the supremacy-bell. God made the Harbor, and that's all right; but Satan made Sydney."

Of course I made an apology; and asked him to convey it to his friend. He was right about Sydney being half of it. It would be beautiful without Sydney, but not above half as beautiful as it is now, with Sydney added. It is shaped somewhat like an oak-leaf—a roomy sheet of lovely blue water, with narrow off-shoots of water running up into the country on both sides between long fingers of land, high wooden ridges with sides sloped like graves. Handsome villas are perched here and there on these ridges, snuggling amongst the foliage, and one catches alluring glimpses of them as the ship swims by toward the city. The city clothes a cluster of hills and a ruffle of neighboring ridges with its undulating masses of masonry, and out of these masses spring towers and spires and other architectural dignities and grandeurs that break the flowing lines and give picturesqueness to the general effect.