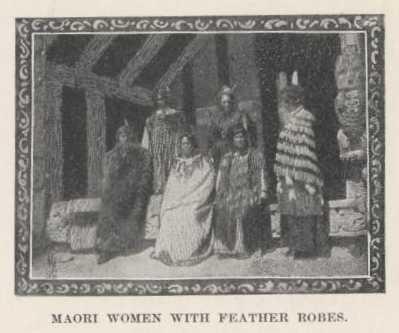 After visits to Maryborough and some other Australian towns, we presently took passage for New Zealand. If it would not look too much like showing off, I would tell the reader where New Zealand is; for he is as I was; he thinks he knows. And he thinks he knows where Hertzegovina is; and how to pronounce pariah; and how to use the word unique without exposing himself to the derision of the dictionary. But in truth, he knows none of these things. There are but four or five people in the world who possess this knowledge, and these make their living out of it. They travel from place to place, visiting literary assemblages, geographical societies, and seats of learning, and springing sudden bets that these people do not know these things. Since all people think they know them, they are an easy prey to these adventurers. Or rather they were an easy prey until the law interfered, three months ago, and a New York court decided that this kind of gambling is illegal, "because it traverses Article IV, Section 9, of the Constitution of the United States, which forbids betting on a sure thing." This decision was rendered by the full Bench of the New York Supreme Court, after a test sprung upon the court by counsel for the prosecution, which showed that none of the nine Judges was able to answer any of the four questions.
All people think that New Zealand is close to Australia or Asia, or somewhere, and that you cross to it on a bridge. But that is not so. It is not close to anything, but lies by itself, out in the water. It is nearest to Australia, but still not near. The gap between is very wide. It will be a surprise to the reader, as it was to me, to learn that the distance from Australia to New Zealand is really twelve or thirteen hundred miles, and that there is no bridge. I learned this from Professor X., of Yale University, whom I met in the steamer on the great lakes when I was crossing the continent to sail across the Pacific. I asked him about New Zealand, in order to make conversation. I supposed he would generalize a little without compromising himself, and then turn the subject to something he was acquainted with, and my object would then be attained; the ice would be broken, and we could go smoothly on, and get acquainted, and have a pleasant time. But, to my surprise, he was not only not embarrassed by my question, but seemed to welcome it, and to take a distinct interest in it. He began to talk—fluently, confidently, comfortably; and as he talked, my admiration grew and grew; for as the subject developed under his hands, I saw that he not only knew where New Zealand was, but that he was minutely familiar with every detail of its history, politics, religions, and commerce, its fauna, flora, geology, products, and climatic peculiarities. When he was done, I was lost in wonder and admiration, and said to myself, he knows everything; in the domain of human knowledge he is king.
I wanted to see him do more miracles; and so, just for the pleasure of hearing him answer, I asked him about Hertzegovina, and pariah, and unique. But he began to generalize then, and show distress. I saw that with New Zealand gone, he was a Samson shorn of his locks; he was as other men. This was a curious and interesting mystery, and I was frank with him, and asked him to explain it.
He tried to avoid it at first; but then laughed and said that after all, the matter was not worth concealment, so he would let me into the secret. In substance, this is his story:

(See Chapter 26 for the burlesque).

Across the Tasman Sea

Cook Strait, strait separating the North and South islands of New Zealand, extending northwest to southeast from the Tasman Sea to the south Pacific Ocean. About 14 miles (23 km) wide at its narrowest point, it averages 420 feet (128 m) in depth. Both shores are lined with steep cliffs, and that of the South Island is deeply embayed. Treacherous currents and fierce storms present serious hazards to navigation, and travel from Wellington (North Island) to Blenheim (South Island) is chiefly by rail ferry and air.