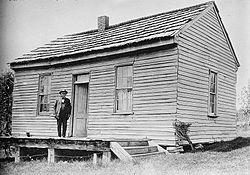 Sam Clemens was born in Florida, MO in November of 1835 when the population of the village was exactly 100.  His family had moved there the previous May or June with the hope that a railway line would be extended from St. Joseph and that the Salt River would be made navigable to the Mississippi.  Neither happened.  The family moved to Hannibal, 35 miles to the northeast, in 1839.

Florida is a currently uninhabited village in Monroe County, Missouri, United States. It is located at the intersection of Missouri Route 107 and State Route U on the shores of Mark Twain Lake. The population was 200, per the census data in the 1911 Cram's World Atlas. The population was however down to nine residents according to the 2000 United States Census, and following the 2010 Census, the village was reported as uninhabited. The Mark Twain Birthplace State Historic Site is located in Florida, with Mark Twain State Park nearby.

November 30 Monday – Samuel Langhorne Clemens (1835-1910) was born two months premature in the hamlet of Florida, Missouri to John Marshall Clemens (1798-1847) and Jane Lampton Clemens (1803-1890). The baby was named Samuel, for John’s father; Langhorne, for the friend of John Marshall’s who had helped him in his youth in Virginia.

Halley’s Comet had reached its perihelion on Nov. 17. It would return again in 1910, reaching its greatest visibility on Apr. 19 of that year, two days before Sam’s death.