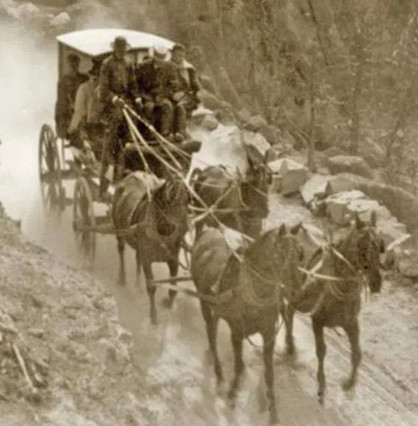 Approximately 7 miles from Head of Echo Canyon Station, about half way down Echo Canyon was the appropriately named Halfway Station. The 3rd contract station in Utah, it was also called Emory, Daniels (an operator), or sometimes Hanging Rock. Unfortunately, Halfway Station remains obscure in history. An undated photograph published in Fike and Headley’s 1979 monograph, and labeled as “Government Creek Telegraph Station,” was ascertained by Jabusch and Nardone to actually depict Halfway Station. The photo shows an old log cabin with a covered entry, and a newer structure of sawn lumber. The structure was apparently torn down after the railroad went through in 1868.

Fike and Headley tell an unresearched story that, in the early days of the Pony, rustlers in the area would steal the express horses, then later sell them back to the company. When the horses began to be branded with the XP (Express) brand, the rustling ended. It was likely destroyed when the existing highway was built as nothing can be found. (Expedition Utah)

A man named Daniels served as stationkeeper at Halfway Station, which was listed as the third Utah station in the 1861 mail contract. Local people also knew the station as Daniels or Emery.  Bishop and Henderson also identify Half Way as a station between Head of Echo Canyon and Weber.  (NPS)