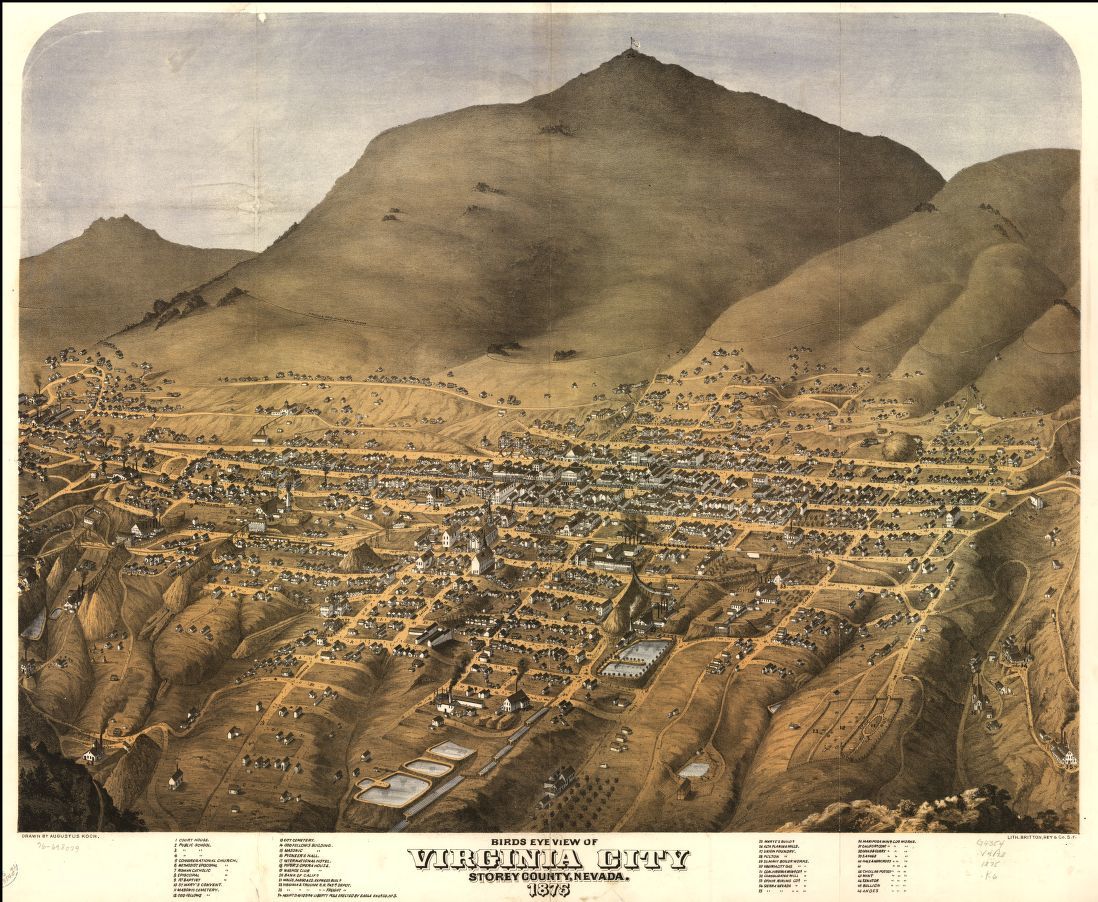 "The “city” of Virginia roosted royally midway up the steep side of Mount Davidson, seven thousand two hundred feet above the level of the sea, and in the clear Nevada atmosphere was visible from a distance of fifty miles! It claimed a population of fifteen thousand to eighteen thousand, and all day long half of this little army swarmed the streets like bees and the other half swarmed among the drifts and tunnels of the “Comstock,” hundreds of feet down in the earth directly under those same streets. Often we felt our chairs jar, and heard the faint boom of a blast down in the bowels of the earth under the office.
The mountain side was so steep that the entire town had a slant to it like a roof. Each street was a terrace, and from each to the next street below the descent was forty or fifty feet. The fronts of the houses were level with the street they faced, but their rear first floors were propped on lofty stilts; a man could stand at a rear first floor window of a C street house and look down the chimneys of the row of houses below him facing D street. It was a laborious climb, in that thin atmosphere, to ascend from D to A street, and you were panting and out of breath when you got there; but you could turn around and go down again like a house a-fire—so to speak. The atmosphere was so rarified, on account of the great altitude, that one’s blood lay near the surface always, and the scratch of a pin was a disaster worth worrying about, for the chances were that a grievous erysipelas would ensue. But to offset this, the thin atmosphere seemed to carry healing to gunshot wounds, and therefore, to simply shoot your adversary through both lungs was a thing not likely to afford you any permanent satisfaction, for he would be nearly certain to be around looking for you within the month, and not with an opera glass, either."
"From Virginia’s airy situation one could look over a vast, far-reaching panorama of mountain ranges and deserts; and whether the day was bright or overcast, whether the sun was rising or setting, or flaming in the zenith, or whether night and the moon held sway, the spectacle was always impressive and beautiful. Over your head Mount Davidson lifted its gray dome, and before and below you a rugged canyon clove the battlemented hills, making a sombre gateway through which a soft-tinted desert was glimpsed, with the silver thread of a river winding through it, bordered with trees which many miles of distance diminished to a delicate fringe; and still further away the snowy mountains rose up and stretched their long barrier to the filmy horizon—far enough beyond a lake that burned in the desert like a fallen sun, though that, itself, lay fifty miles removed. Look from your window where you would, there was fascination in the picture. At rare intervals—but very rare—there were clouds in our skies, and then the setting sun would gild and flush and glorify this mighty expanse of scenery with a bewildering pomp of color that held the eye like a spell and moved the spirit like music." (Roughing It)