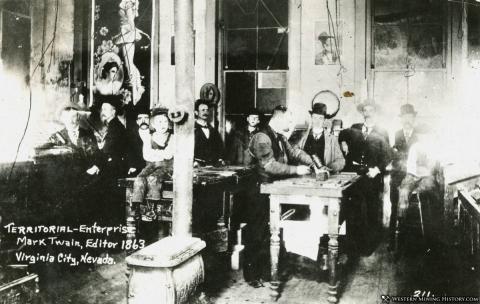 "Six months after my entry into journalism the grand “flush times” of Silverland began, and they continued with unabated splendor for three years. All difficulty about filling up the “local department” ceased, and the only trouble now was how to make the lengthened columns hold the world of incidents and happenings that came to our literary net every day. Virginia had grown to be the “livest” town, for its age and population, that America had ever produced. The sidewalks swarmed with people—to such an extent, indeed, that it was generally no easy matter to stem the human tide. The streets themselves were just as crowded with quartz wagons, freight teams and other vehicles. The procession was endless. So great was the pack, that buggies frequently had to wait half an hour for an opportunity to cross the principal street. Joy sat on every countenance, and there was a glad, almost fierce, intensity in every eye, that told of the money-getting schemes that were seething in every brain and the high hope that held sway in every heart. Money was as plenty as dust; every individual considered himself wealthy, and a melancholy countenance was nowhere to be seen. There were military companies, fire companies, brass bands, banks, hotels, theatres, “hurdy- gurdy houses,” wide-open gambling palaces, political pow-wows, civic processions, street fights, murders, inquests, riots, a whiskey mill every fifteen steps, a Board of Aldermen, a Mayor, a City Surveyor, a City Engineer, a Chief of the Fire Department, with First, Second and Third Assistants, a Chief of Police, City Marshal and a large police force, two Boards of Mining Brokers, a dozen breweries and half a dozen jails and station-houses in full operation, and some talk of building a church. The “flush times” were in magnificent flower! Large fire-proof brick buildings were going up in the principal streets, and the wooden suburbs were spreading out in all directions. Town lots soared up to prices that were amazing.
The great “Comstock lode” stretched its opulent length straight through the town from north to south, and every mine on it was in diligent process of development. One of these mines alone employed six hundred and seventy-five men, and in the matter of elections the adage was, “as the ‘Gould and Curry’ goes, so goes the city.” Laboring men’s wages were four and six dollars a day, and they worked in three “shifts” or gangs, and the blasting and picking and shoveling went on without ceasing, night and day." (Roughing It)

Chapter 54 from Roughing It: 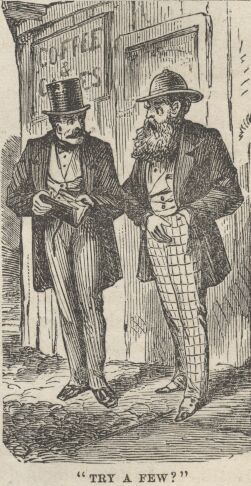 "Six months after my entry into journalism the grand “flush times” of Silverland began, and they continued with unabated splendor for three years. All difficulty about filling up the “local department” ceased, and the only trouble now was how to make the lengthened columns hold the world of incidents and happenings that came to our literary net every day.

Chapter 52 of Roughing It:

Charles Farrar Browne (April 26, 1834 – March 6, 1867) was a United States humor writer, better known under his nom de plume, Artemus Ward. He is considered to be America's first stand-up comedian. At birth, his surname was "Brown"; he added the "e" after he became famous. Ward met Mark Twain when Ward performed in Virginia City, Nevada and the two became friends.