In A Pioneer Land, Salt Lake City to Camp Floyd

I left Great Salt Lake a good deal confused as to what state of things existed there—and sometimes even questioning in my own mind whether a state of things existed there at all or not. But presently I remembered with a lightening sense of relief that we had learned two or three trivial things there which we could be certain of; and so the two days were not wholly lost. For instance, we had learned that we were at last in a pioneer land, in absolute and tangible reality.

The high prices charged for trifles were eloquent of high freights and bewildering distances of freightage. In the east, in those days, the smallest moneyed denomination was a penny and it represented the smallest purchasable quantity of any commodity. West of Cincinnati the smallest coin in use was the silver five-cent piece and no smaller quantity of an article could be bought than “five cents’ worth.” In Overland City the lowest coin appeared to be the ten-cent piece; but in Salt Lake there did not seem to be any money in circulation smaller than a quarter, or any smaller quantity purchasable of any commodity than twenty-five cents’ worth. We had always been used to half dimes and “five cents’ worth” as the minimum of financial negotiations; but in Salt Lake if one wanted a cigar, it was a quarter; if he wanted a chalk pipe, it was a quarter; if he wanted a peach, or a candle, or a newspaper, or a shave, or a little Gentile whiskey to rub on his corns to arrest indigestion and keep him from having the toothache, twenty-five cents was the price, every time. When we looked at the shot-bag of silver, now and then, we seemed to be wasting our substance in riotous living, but if we referred to the expense account we could see that we had not been doing anything of the kind.

But people easily get reconciled to big money and big prices, and fond and vain of both—it is a descent to little coins and cheap prices that is hardest to bear and slowest to take hold upon one’s toleration. After a month’s acquaintance with the twenty-five cent minimum, the average human being is ready to blush every time he thinks of his despicable five-cent days. How sunburnt with blushes I used to get in gaudy Nevada, every time I thought of my first financial experience in Salt Lake. It was on this wise (which is a favorite expression of great authors, and a very neat one, too, but I never hear anybody say on this wise when they are talking). 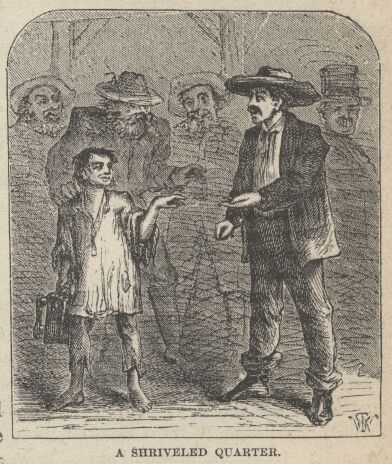 A young half-breed with a complexion like a yellow-jacket asked me if I would have my boots blacked. It was at the Salt Lake House the morning after we arrived. I said yes, and he blacked them. Then I handed him a silver five-cent piece, with the benevolent air of a person who is conferring wealth and blessedness upon poverty and suffering. The yellow-jacket took it with what I judged to be suppressed emotion, and laid it reverently down in the middle of his broad hand. Then he began to contemplate it, much as a philosopher contemplates a gnat’s ear in the ample field of his microscope. Several mountaineers, teamsters, stage- drivers, etc., drew near and dropped into the tableau and fell to surveying the money with that attractive indifference to formality which is noticeable in the hardy pioneer. Presently the yellow-jacket handed the half dime back to me and told me I ought to keep my money in my pocket-book instead of in my soul, and then I wouldn’t get it cramped and shriveled up so!

What a roar of vulgar laughter there was! I destroyed the mongrel reptile on the spot, but I smiled and smiled all the time I was detaching his scalp, for the remark he made was good for an “Injun.”

Yes, we had learned in Salt Lake to be charged great prices without letting the inward shudder appear on the surface—for even already we had overheard and noted the tenor of conversations among drivers, conductors, and hostlers, and finally among citizens of Salt Lake, until we were well aware that these superior beings despised “emigrants.” We permitted no tell-tale shudders and winces in our countenances, for we wanted to seem pioneers, or Mormons, half-breeds, teamsters, stage-drivers, Mountain Meadow assassins—anything in the world that the plains and Utah respected and admired—but we were wretchedly ashamed of being “emigrants,” and sorry enough that we had white shirts and could not swear in the presence of ladies without looking the other way.

And many a time in Nevada, afterwards, we had occasion to remember with humiliation that we were “emigrants,” and consequently a low and inferior sort of creatures. Perhaps the reader has visited Utah, Nevada, or California, even in these latter days, and while communing with himself upon the sorrowful banishment of these countries from what he considers “the world,” has had his wings clipped by finding that he is the one to be pitied, and that there are entire populations around him ready and willing to do it for him—yea, who are complacently doing it for him already, wherever he steps his foot.
Poor thing, they are making fun of his hat; and the cut of his New York coat; and his conscientiousness about his grammar; and his feeble profanity; and his consumingly ludicrous ignorance of ores, shafts, tunnels, and other things which he never saw before, and never felt enough interest in to read about. And all the time that he is thinking what a sad fate it is to be exiled to that far country, that lonely land, the citizens around him are looking down on him with a blighting compassion because he is an “emigrant” instead of that proudest and blessedest creature that exists on all the earth, a “FORTY-NINER.”