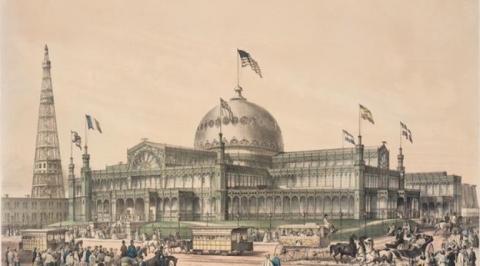 Sam wrote his mother with a somewhat backhanded apology for shocking her at his destination. He then described an exhibit of what would later become “the wild men of Borneo,” and a brief mention of the Crystal Palace and the Marble Palace. Sam found lodging in a mechanics’ boarding house on Duane Street.

My Dear Mother: you will doubtless be a little surprised, and somewhat angry when you receive this, and find me so far from home; but you must bear a little with me, for you know I was always the best boy you had, and perhaps you remember the people used to say to their children—“Now don’t do likeO rion and Henry Clemens but take Sam for your guide!

Well, I was out of work in St. Louis, and didn’t fancy loafing in such a dry place, where there is no pleasure to be seen without paying well for it, and so I thought I might as well go to New York. I packed up my “duds” and left for this village, where I arrived, all right, this morning.

It took a day, by steamboat and cars, to go from St. Louis to Bloomington, Ill; another day by railroad, from there to Chicago, where I laid over all day Sunday; from Chicago to Monroe, in Michigan, by railroad, another day; from Monroe, across Lake Erie, in the fine Lake palace, “Southern Michigan,” to Buffalo, another day; from Buffalo to Albany, by railroad, another day; and from Albany to New York, by Hudson river steamboat, another day—an awful trip, taking five days, where it should have been only three. I shall wait a day or so for my insides to get settled, after the jolting they received, when I shall look out for a sit for they say there is plenty of work to be had for sober compositors.

The trip, however, was a very pleasant one. Rochester, famous on account of the “Spirit Rappings” was of course interesting; and when I saw the Court House in Syracuse, it called to mind the time when it was surrounded with chains and companies of soldiers, to prevent the rescue of McReynolds’ nigger, by the infernal abolitionists. I reckon I had better black my face, for in these Eastern States niggers are considerably better than white people.

I saw a curiosity to-day, but I don’t know what to call it. Two beings, about like common people, with the exception of their faces, which are more like the “phiz” of an orang-outang, than human. They are white, though, like other people. lmagine a person about the size of Harvel Jordan’s oldest boy, with small lips and full breast, with a constant uneasy, fidgety motion, bright, intelligent eyes, that seems as if they would look through you, and you have these things. They were found in the island of Borneo (the only ones of the species ever discovered,) about twenty years ago. One of them is twenty three, and the other twenty five years of age. They possess amazing strength; the smallest one would shoulder three hundred pounds as easily as I would a plug of tobacco; they are supposed to be a cross between man and orang-outang; one is the best natured being in the world, while the other would tear a stranger to pieces, if he did but touch him; they wear their hair “Samson” fashion, down to their waists. They have no apple in their throats, whatever, and can therefore scarcely make a sound; no memory either; what transpires to-day, they have forgotten before to-morrow; they look like one mass of muscle, and can walk either on all fours or upright; when let alone, they will walk to and fro across the room, thirteen hours out of the twenty-four; not a day passes but they walk twenty-five or thirty miles, without resting thirty minutes; I watched them about an hour and they were “tramping” the whole time. The little one bent his arm with the elbow in front, and the hand pointing upward, and no two strapping six footers in the room could pull it out straight. Their faces and eyes are those of the beast, and when they fix their glittering orbs on you with a steady, unflinching gaze, you instinctively draw back a step, and a very unpleasant sensation steals through your veins. They are both males and brothers, and very small, though I do not know their exact hight. I have given you a very lengthy description of the animals, but I have nothing else to write about, and nothing from here would be interesting anyhow. The Crystal Palace is a beautiful building—so is the Marble Palace. If I can find nothing better to write about, I will say something about these in my next.

I found board in a sufficiently villainous mechanics’ boarding-house in Duane Street,” Clemens said in 1906. There were, in fact, numerous boardinghouses on Duane Street. Paine reported that Clemens “did not like the board. He had been accustomed to the Southern mode of cooking, and wrote home complaining that New-Yorkers did not have ‘hot-bread’ or biscuits, but ate ‘light-bread,’ which they allowed to get stale, seeming to prefer it in that way”. If Clemens made his complaint in a letter, as Paine asserts, it is not known to survive.

From John A. Gray’s establishment on the East River side of lower Manhattan, it was about a ten-block walk across town to Duane Street near Broadway on the West Side, where Clemens lived and boarded. Broadway was notably wider than the typical “little, narrow street” of lower Manhattan; it was also packed with carts, hacks, coaches, and omnibuses, not to mention pedestrians.

Sam relocated to Philadelphia, PA October 1853 to March 1854. While there he spent a long weekend in Washington DC, returning to Philadelphia and two weeks later back to New York.

Clemens’s removal to New York very likely occurred about two weeks after his return to Philadelphia. On 10 March and again on 17 March there were unclaimed letters for him in Philadelphia, an indication that by then he had left the city (“List of Letters Remaining in the Philadelphia Post Office,” Philadelphia Public Ledger, 11 and 20 Mar 54, 4). Paine reported, “His second experience in New York appears not to have been recorded, and in later years was only vaguely remembered”. Perhaps Clemens erased this period from his memory because it was a time of financial distress and bruised pride. His former confidence in his ability to “take care of himself a few miles from home” must have been shaken in the spring of 1854. Unemployment among New York printers was high, at least in part the result of the destruction by fire of two major publishing houses, Harper and Brothers and George F. Cooledge and Brothers, in December 1853 (“Destructive Fire,” New York Times, 12 Dec 53, 1). Forty-five years later Clemens acknowledged that he had been “obliged by financial stress” to return home.

In 1906 Clemens described this return trip: “I went back to the Mississippi Valley, sitting upright in the smoking-car two or three days and nights. When I reached St. Louis I was exhausted. I went to bed on board a steamboat that was bound for Muscatine. I fell asleep at once, with my clothes on, and didnt’ wake again for thirty-six hours”.