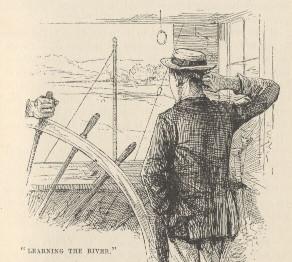 November 27 to December 12 Saturday – Sam worked as a night watchman on the freight docks from seven in the evening until seven in the morning. He earned three dollars a night [Neider 100].n

"Clemens was a steersman on the PENNSYLVANIA from late September of 1857 until her collision with the VICKSBURG on the twenty sixth of November of that year. A week later he was clerking and steering on the WILLIAM M. MORRISON under the watchful eye of the old pilot Isaiah Sellers. Sellers was one of the pilots on the J. M. WHITE in 1844 when she set the speed record for a trip from New Orleans to St. Louis in 3 days, 23 hours and 9 minutes. In February of 1858 the MORRISON was laid up and Clemens returned to his duties on the repaired PENNSYLVANIA."

["ONLY ONCE BEFORE"  By Michael Marleau]