Last Boat Through the Union Blockade 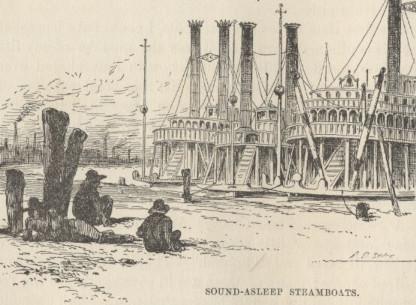 May 14 Tuesday – Sam departed New Orleans as a passenger on the Nebraska. Commercial traffic was halted. This was the last boat allowed through the Union blockade at Memphis. Sam’s days as a river pilot were over, though he did not know it at the time. He would later wax nostalgic and eloquent about his idyllic career on the river. Just as his idyllic days of boyhood in Hannibal had abruptly ended, so too did his time on “the best job in the world.” Paine gives the name of the boat as the Uncle Sam: “I’ll think about it,” he said. “I’m not very anxious to get up into a glass perch and be shot at by either side. I’ll go home and reflect on the matter” [MTB 161].

May 21 Tuesday – Sam arrived in St. Louis. Sam hid out in the Moffett residence, fearful of being arrested by Union agents and forced to pilot a gunboat. He stayed there for a few weeks [MTL 1: 121]. During his stay he was invited to visit his cousin James Lampton, also in St. Louis. James was Jane Lampton Clemens’ first cousin, and the model for Colonel Mulberry Sellers in The Gilded Age. Sam stayed at James’ house for a few days. It was during this stay when the famous “turnips and water” dinner was served. When Sam came home one day he was given the key to the neighbor’s house, owned by George Schroter (or Schroeter) (1813?-1896?), Will Moffett’s business partner. The Schroter family was in Hannibal and it was thought Sam would be safer in their St. Louis house. One day a man who gave the name “Smith” came looking for Sam and his mother recognized him as a friend of Sam’s. The man came with the project of forming a Confederate company in the Hannibal area to join General Sterling “Old Pap” Price (1809-1867). Sam accepted and began the Marion Rangers fiasco [MTBus 60].

May 22 Wednesday – The Polar Star Masonic Lodge Number Seventy-nine of St. Louis initiated Sam Clemens an Entered Apprentice, the next step up [Jones 364]. Note: Strong gives May 21 for the initiation [88].

June 12 Wednesday – Sam was probably no longer hiding out at his sister’s, for on this date he was raised to Master Mason (second degree) in the Polar Star Masonic Lodge Number Seventy-nine of St. Louis [Jones 364].

June 15 Saturday ca. – The Missouri state government had fled from Jefferson City by this date. Absalom Grimes wrote in his memoirs that he, Sam Bowen and Clemens were in Hannibal and were ordered to report to General Grey in St. Louis. (This may have been General Henry Gray, Jr. (1816-1892) spelled “Grey” by Grimes.) They made the trip on the Hannibal City and were instructed to be pilots carrying soldiers up the Missouri River, in pursuit of Governor Claiborne Fox Jackson (1806-1862). The three escaped and returned to Hannibal [Dempsey 266-7].

June, mid – Back in Hannibal, Sam joined his merry band of play soldiers, the Marion Rangers, a ragtag bunch of friends who took up the Southern “cause.” In 1885 Sam wrote a humorous account of these two weeks in “The Private History of a Campaign that Failed,” where all names except Ed Stevens were fictitious [Rasmussen 370-1]. The group of old Hannibal schoolmates included William Ely, Asa Glasscock, Absalom Grimes, John D. Meredith, Sam Bowen, John L. RoBards, Perry Smith, and Ed Stevens [Budd, “Collected” 955-6; MTB 166].

The article below adds Tom Lyon and Charley Mills. From the special Mark Twain Centennial edition of the Hannibal Courier-Post, Mar. 6, 1935 p.9b: Grimes said he went to his home in Ralls county after their return and a short time later when the war fever reached Ralls county he heard that a brigade of troops had assembled at the home of Nuck Matson, near New London….There he found his pilot friends, Sam Clemens and Sam Bowen and other young men he knew, among them being Charley Mills, Jack Coulter, Tom Lyon, Ed Stephens and Asa Fuqua. He joined them. At the home of Col. John Ralls the company met a similar group who called themselves the Salt River Tigers. The Tigers were organized, which led Mark Twain’s group to believe they should elect officers. In the ensuing election William Ely was elected captain, Asa Glascock became first lieutenant, Mark Twain was elected second lieutenant, with Sam Bowen as sergeant and Tom Lyon orderly sergeant.

“After all the officers were elected we had three or four men to serve as privates,” Grimes said. They took the name Ralls County Rangers and called upon Mark Twain for a speech. After much persuading he got upon a log and made a bashful speech which probably would have amazed the thousands who heard him years later on the lecture tour.

The ranger episode ended with Sam suffering a painful boil, a sprained ankle and several burns when he fell from a hayloft which caught fire from a smoker’s pipe. He convalesced at the home of Mr. and Mrs. Nuck Matson, near New London. By then the company has disbanded. (See Confederate Mail Runner by Absalom Grimes, 1926 for more.)

July, early – Sam returned to St. Louis. Sometime in the first half of the year (Budd says “probably written in early 1861”) [“Collected” 1000] before leaving for the West, Sam wrote an untitled tale (“Ghost Life on the Mississippi”) not published until 1948, but which was “a milestone in Clemens’ early development as a writer. “Despite certain inconsistencies and weaknesses in the narrative handling, the tale revealed a growing literary maturity and a distinct ability to construct serious fiction of some length” [ET&S 1: 146]. Sam used a pen name, “WILLIAM JONES—PRESENTED BY HIS FATHER.”

July 4 Thursday – Orion left his family in Keokuk and joined Sam, ready to travel to Nevada to take his new position as territorial secretary. He persuaded Sam to go with him, since Sam had the wherewithal to pay passage, and Orion did not. Sam did not request a “demit” (an official termination) from the Masons, which means he allowed himself to be suspended, and eventually not be a member [Jones 364].

July 11 Thursday – Orion took an oath of office before a Supreme Court Justice in St. Louis. It was the one prestigious position of Orion’s life, owed to his persistent campaigning for Lincoln in 1860 and his connection with Edward Bates, who had been appointed Attorney General [Powers, MT A Life 102].

July 18 Thursday – Orion and Sam left St. Louis on the Sioux City for St. Joseph, Missouri [MTL 1: 122 citing Mollie Clemens’ Journal]. In Roughing It, Sam wrote: “— a trip that was so dull, and sleepy, and eventless, that it has left no more impression on my memory than if its duration had been six minutes…” A. Hoffman gives this date as July 10, 1861 [62]. July 18 seems more likely.