From Diary:—For a day or two we have been plowing among an invisible vast wilderness of islands, catching now and then a shadowy glimpse of a member of it. There does seem to be a prodigious lot of islands this year; the map of this region is freckled and fly-specked all over with them. Their number would seem to be uncountable. We are moving among the Fijis now—224 islands and islets in the group. In front of us, to the west, the wilderness stretches toward Australia, then curves upward to New Guinea, and still up and up to Japan; behind us, to the east, the wilderness stretches sixty degrees across the wastes of the Pacific; south of us is New Zealand. Somewhere or other among these myriads Samoa is concealed, and not discoverable on the map. Still, if you wish to go there, you will have no trouble about finding it if you follow the directions given by Robert Louis Stevenson to Dr. Conan Doyle and to Mr. J. M. Barrie. "You go to America, cross the continent to San Francisco, and then it's the second turning to the left." To get the full flavor of the joke one must take a glance at the map.

Wednesday, September 11.—Yesterday we passed close to an island or so, and recognized the published Fiji characteristics: a broad belt of clean white coral sand around the island; back of it a graceful fringe of leaning palms, with native huts nestling cosily among the shrubbery at their bases; back of these a stretch of level land clothed in tropic vegetation; back of that, rugged and picturesque mountains. A detail of the immediate foreground: a mouldering ship perched high up on a reef-bench. This completes the composition, and makes the picture artistically perfect.

In the afternoon we sighted Suva, the capital of the group, and threaded our way into the secluded little harbor—a placid basin of brilliant blue and green water tucked snugly in among the sheltering hills. A few ships rode at anchor in it—one of them a sailing vessel flying the American flag; and they said she came from Duluth! There's a journey! Duluth is several thousand miles from the sea, and yet she is entitled to the proud name of Mistress of the Commercial Marine of the United States of America. There is only one free, independent, unsubsidized American ship sailing the foreign seas, and Duluth owns it. All by itself that ship is the American fleet. All by itself it causes the American name and power to be respected in the far regions of the globe. All by itself it certifies to the world that the most populous civilized nation, in the earth has a just pride in her stupendous stretch of sea-front, and is determined to assert and maintain her rightful place as one of the Great Maritime Powers of the Planet. All by itself it is making foreign eyes familiar with a Flag which they have not seen before for forty years, outside of the museum. For what Duluth has done, in building, equipping, and maintaining at her sole expense the American Foreign Commercial Fleet, and in thus rescuing the American name from shame and lifting it high for the homage of the nations, we owe her a debt of gratitude which our hearts shall confess with quickened beats whenever her name is named henceforth. Many national toasts will die in the lapse of time, but while the flag flies and the Republic survives, they who live under their shelter will still drink this one, standing and uncovered: Health and prosperity to Thee, O Duluth, American Queen of the Alien Seas! 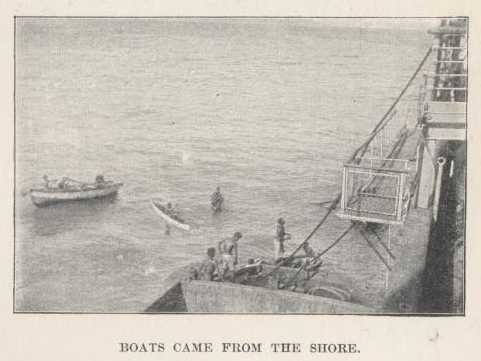 Row-boats began to flock from the shore; their crews were the first natives we had seen. These men carried no overplus of clothing, and this was wise, for the weather was hot. Handsome, great dusky men they were, muscular, clean-limbed, and with faces full of character and intelligence. It would be hard to find their superiors anywhere among the dark races, I should think.

Everybody went ashore to look around, and spy out the land, and have that luxury of luxuries to sea-voyagers—a land-dinner. And there we saw more natives: Wrinkled old women, with their flat mammals flung over their shoulders, or hanging down in front like the cold-weather drip from the molasses-faucet; plump and smily young girls, blithe and content, easy and graceful, a pleasure to look at; young matrons, tall, straight, comely, nobly built, sweeping by with chin up, and a gait incomparable for unconscious stateliness and dignity; majestic young men—athletes for build and muscle—clothed in a loose arrangement of dazzling white, with bronze breast and bronze legs naked, and the head a cannon-swab of solid hair combed straight out from the skull and dyed a rich brick-red. Only sixty years ago they were sunk in darkness; now they have the bicycle.

We strolled about the streets of the white folks' little town, and around over the hills by paths and roads among European dwellings and gardens and plantations, and past clumps of hibiscus that made a body blink, the great blossoms were so intensely red; and by and by we stopped to ask an elderly English colonist a question or two, and to sympathize with him concerning the torrid weather; but he was surprised, and said:

"This? This is not hot. You ought to be here in the summer time once."

"We supposed that this was summer; it has the ear-marks of it. You could take it to almost any country and deceive people with it. But if it isn't summer, what does it lack?"

It lacks half a year. This is mid-winter."