The South Sea Islanders and the Queensland Labour Trade

Entering the Islands of the South Seas

Captain Wawn is crystal-clear on one point: He does not approve of missionaries. They obstruct his business. They make "Recruiting," as he calls it ("Slave-Catching," as they call it in their frank way) a trouble when it ought to be just a picnic and a pleasure excursion. The missionaries have their opinion about the manner in which the Labor Traffic is conducted, and about the recruiter's evasions of the law of the Traffic, and about the traffic itself—and it is distinctly uncomplimentary to the Traffic and to everything connected with it, including the law for its regulation. Captain Wawn's book is of very recent date; I have by me a pamphlet of still later date—hot from the press, in fact—by Rev. Wm. Gray, a missionary; and the book and the pamphlet taken together make exceedingly interesting reading, to my mind.

In these past few days we are plowing through a mighty Milky Way of islands. They are so thick on the map that one would hardly expect to find room between them for a canoe; yet we seldom glimpse one. Once we saw the dim bulk of a couple of them, far away, spectral and dreamy things; members of the Horne-Alofa and Fortuna. On the larger one are two rival native kings—and they have a time together. They are Catholics; so are their people. The missionaries there are French priests.

From the multitudinous islands in these regions the "recruits" for the Queensland plantations were formerly drawn; are still drawn from them, I believe. Vessels fitted up like old-time slavers came here and carried off the natives to serve as laborers in the great Australian province. In the beginning it was plain, simple man-stealing, as per testimony of the missionaries. This has been denied, but not disproven. Afterward it was forbidden by law to "recruit" a native without his consent, and governmental agents were sent in all recruiting vessels to see that the law was obeyed—which they did, according to the recruiting people; and which they sometimes didn't, according to the missionaries. A man could be lawfully recruited for a three-years term of service; he could volunteer for another term if he so chose; when his time was up he could return to his island. And would also have the means to do it; for the government required the employer to put money in its hands for this purpose before the recruit was delivered to him. 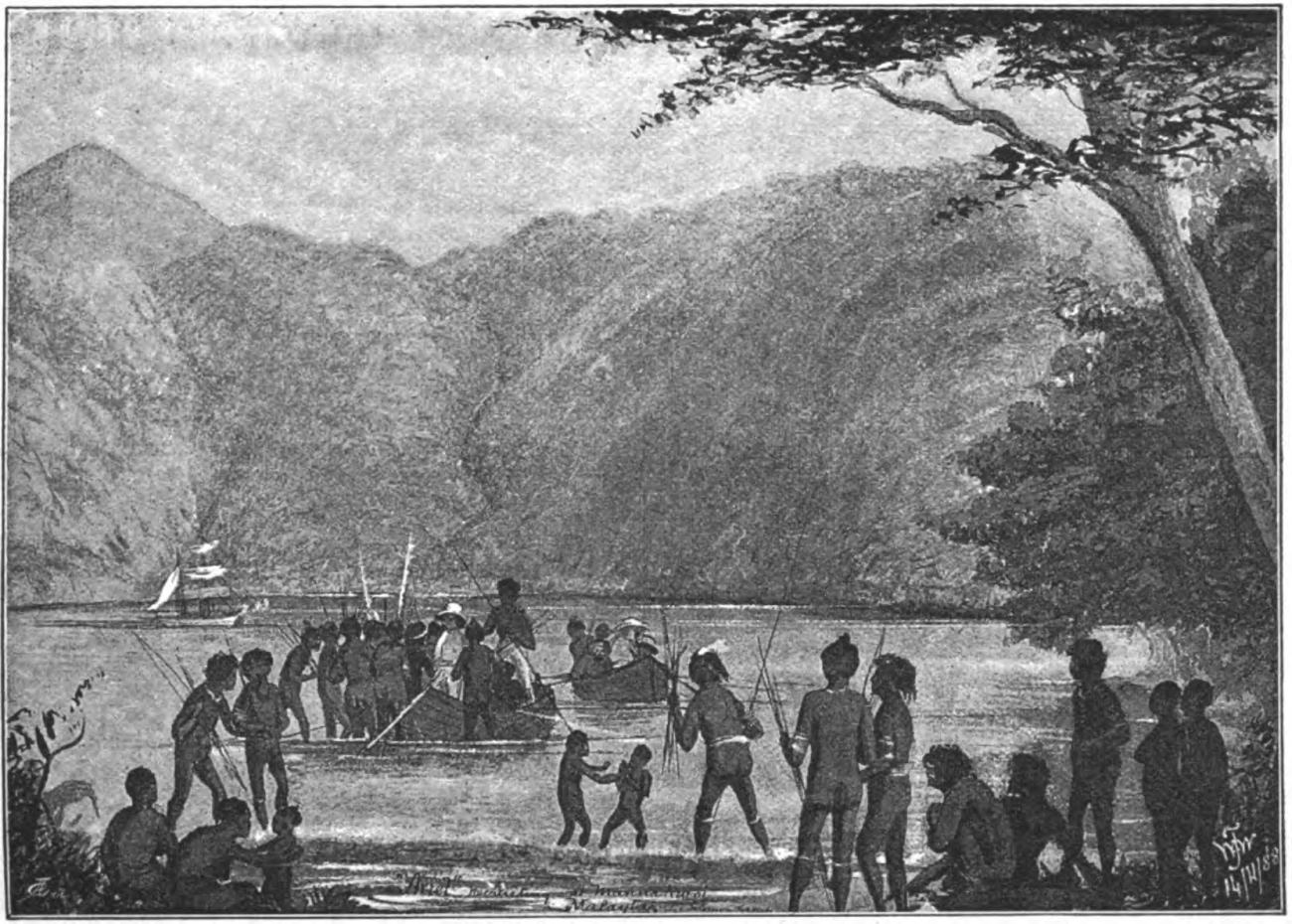 Captain Wawn was a recruiting ship-master during many years. From his pleasant book one gets the idea that the recruiting business was quite popular with the islanders, as a rule. And yet that did not make the business wholly dull and uninteresting; for one finds rather frequent little breaks in the monotony of it—like this, for instance:

"The afternoon of our arrival at Leper Island the schooner was lying almost becalmed under the lee of the lofty central portion of the island, about three-quarters of a mile from the shore. The boats were in sight at some distance. The recruiter-boat had run into a small nook on the rocky coast, under a high bank, above which stood a solitary hut backed by dense forest. The government agent and mate in the second boat lay about 400 yards to the westward.

"Suddenly we heard the sound of firing, followed by yells from the natives on shore, and then we saw the recruiter-boat push out with a seemingly diminished crew. The mate's boat pulled quickly up, took her in tow, and presently brought her alongside, all her own crew being more or less hurt. It seems the natives had called them into the place on pretence of friendship. A crowd gathered about the stern of the boat, and several fellows even got into her. All of a sudden our men were attacked with clubs and tomahawks. The recruiter escaped the first blows aimed at him, making play with his fists until he had an opportunity to draw his revolver. 'Tom Sayers,' a Mare man, received a tomahawk blow on the head which laid the scalp open but did not penetrate his skull, fortunately. 'Bobby Towns,' another Mare boatman, had both his thumbs cut in warding off blows, one of them being so nearly severed from the hand that the doctors had to finish the operation. Lihu, a Lifu boy, the recruiter's special attendant, was cut and pricked in various places, but nowhere seriously. Jack, an unlucky Tanna recruit, who had been engaged to act as boatman, received an arrow through his forearm, the head of which—apiece of bone seven or eight inches long—was still in the limb, protruding from both sides, when the boats returned. The recruiter himself would have got off scot-free had not an arrow pinned one of his fingers to the loom of the steering-oar just as they were getting off. The fight had been short but sharp. The enemy lost two men, both shot dead."

Captain Wawn of the free spirit chafes under the annoyance of "cast-iron regulations." They and the missionaries have poisoned his life. He grieves for the good old days, vanished to come no more. See him weep; hear him cuss between the lines!

"For a long time we were allowed to apprehend and detain all deserters who had signed the agreement on board ship, but the 'cast-iron' regulations of the Act of 1884 put a stop to that, allowing the Kanaka to sign the agreement for three years' service, travel about in the ship in receipt of the regular rations, cadge all he could, and leave when he thought fit, so long as he did not extend his pleasure trip to Queensland."

Rev. Mr. Gray calls this same restrictive cast-iron law a "farce." "There is as much cruelty and injustice done to natives by acts that are legal as by deeds unlawful. The regulations that exist are unjust and inadequate—unjust and inadequate they must ever be." He furnishes his reasons for his position, but they are too long for reproduction here.

However, if the most a Kanaka advantages himself by a three-years course in civilization in Queensland, is a necklace and an umbrella and a showy imperfection in the art of swearing, it must be that all the profit of the traffic goes to the white man. This could be twisted into a plausible argument that the traffic ought to be squarely abolished.

However, there is reason for hope that that can be left alone to achieve itself. It is claimed that the traffic will depopulate its sources of supply within the next twenty or thirty years. Queensland is a very healthy place for white people—death-rate 12 in 1,000 of the population—but the Kanaka death-rate is away above that. The vital statistics for 1893 place it at 52; for 1894 (Mackay district), 68. The first six months of the Kanaka's exile are peculiarly perilous for him because of the rigors of the new climate. The death-rate among the new men has reached as high as 180 in the 1,000. In the Kanaka's native home his death-rate is 12 in time of peace, and 15 in time of war. Thus exile to Queensland—with the opportunity to acquire civilization, an umbrella, and a pretty poor quality of profanity—is twelve times as deadly for him as war. Common Christian charity, common humanity, does seem to require, not only that these people be returned to their homes, but that war, pestilence, and famine be introduced among them for their preservation.