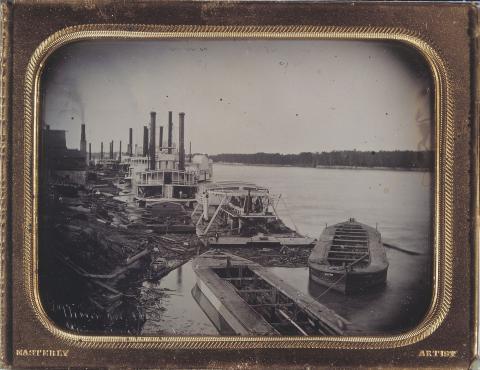 According to Rasmussen, while working as a river boat pilot "he landed at St. Louis perhaps 60 times."

St Louis was Sam's destination when he first left home in Hannibal, arriving May 27, 1853. He was 17 1/2 years old and aiming for New York City.

Sam returned to St. Louis in 1854.  He contributed a letter to the Muscatine Tri-Weekly Journal, 16 Feb 1855 that remarked on efforts to enlarge the size of St. Louis as well as railroad developments.

An extension of the city limits seems to be exciting a good deal of attention just now, and meetings are held every day or two to consider the subject.

St. Louis was debating the merits of a bill, proposed by the city council on 27 December 1854, to redistrict the city into ten wards and triple its area. Under the proposal the city would extend roughly three miles east to west and seven miles along the Mississippi River. Voters ultimately approved the bill, which took effect on 5 December 1855.  SLC to the Editors of the Muscatine Tri-Weekly Journal, 16 Feb 1855, St. Louis, Mo. (UCCL 00008), n. 3.

The first train went through to Washington, on the Pacific railroad, on the 9th. The cars started from the new depot in Seventh street. The work on this road is progressing finely, and I hear no more complaint about a want of funds.

The Pacific Railroad had been incorporated by Missouri on 12 March 1849. It was intended to run between St. Louis and Kansas City (about two hundred and eighty miles) and eventually to be part of the central route linking the two coasts. Liberally funded by the legislature, the railroad had just opened a fifty-four-mile section to Washington, Missouri, on 10 February. The Missouri Democrat predicted that “at no very distant day” the railroad would “bring to our city’s lap not only the wealth of golden California, but the richer and more enduring treasures of the world’s trade with the Indies and the East” (“Opening of the Pacific Railroad to Washington on the Missouri,” 12 Feb 55, 2). Despite government assistance, however, a lack of funds impeded construction and the line was not completed to Kansas City until 1865. It eventually became part of the “Southwestern system,” which extended to the Pacific coast.  SLC to the Editors of the Muscatine Tri-Weekly Journal, 16 Feb 1855, St. Louis, Mo. (UCCL 00008), n. 4.

From Roughing It, on leaving for the west:  "We were six days going from St. Louis to "St. Jo."--a trip that was so dull, and sleepy, and eventless that it has left no more impression on my memory than if its duration had been six minutes instead of that many days. No record is left in my mind, now, concerning it, but a confused jumble of savage-looking snags, which we deliberately walked over with one wheel or the other; and of reefs which we butted and butted, and then retired from and climbed over in some softer place; and of sand-bars which we roosted on occasionally, and rested, and then got out our crutches and sparred over."

EDITORS ALTA: Well, I had to bid good-bye to St. Louis at last. I found it and left it the same happy, cheerful, contented old town - a town where the people are kind and polite, even to strangers - where you can go into a business house you never saw before and speak to a man you never heard of before, and get a perfectly civil answer. It reminded me of the Pacific Coast.

Of course I noticed some little unusual odds and ends of things that set me to thinking. I heard people say "prink" to express that they had been "fixing up ;" and heard them say they had been "peeking" through a crack, for instance, instead of "peeping;" and heard them say "cal'late" instead of "reckon" (which latter is a perfectly legitimate word, as the ALTA readers may see by reference to the 18th verse of the 8th chapter of Romans ;) and heard them say "I admire to do so and so," (which is barbarous;) and heard them say "bosket" for basket, and "gloss" for glass; and "be you goin' home" for "are you going home;~ and heard them say "she is quite pretty" when they meant "she is right pretty" - the one expressing perfection and the other merely a degree of excellence. I heard those and many other unhappy provincialisms which warned me that many New England people have gone westward and are going to mar the ancient purity of the Missourian dialect if somebody don't put a stop to it. But the funniest thing to me was to hear those same immigrants criticising our manner of speaking, and calling attention to what they honestly considered infelicities of language on our part. I couldn't stand that right well.

And I noticed and was glad to see that the Nicolson pavement was used a good deal in St. Louis.

And I also noticed that the ladies did not dress in full fashion - which is a thing that always distresses me. No woman can look as well out of the fashion as in it.

And I noticed that the children in St. Louis have thin legs as a general thing. You see they haven't any hills to climb.

And I noticed that few young men were bald-headed - which is not the case on the Pacific Coast.

And I noticed that whenever people hadn't anything to do, they washed their hands. They use a great deal of coal there, and the air is always filled with invisible coal-dust that soils every thing it touches.

And I noticed that flour was nineteen dollars a barrel.

And I observed that the political bitternesses engendered during the war are still about as strong as they ever were. Individual friends and whole families of old tried friends are widely separated yet - don't visit and don't hold any intercourse with each other. If you give a dinner party for either gentlemen or ladies, or both, it is much the best policy to invite Democrats only or Republicans only. Even Church congregations are organized, net on religious but on political bases; and the Creed begins, "I believe in Abraham Lincoln, the Martyr-President of the United States," or, "I believe in Jefferson Davis, the founder of the Confederate States of America." The genuine Creeds begin that way, although to keep up appearances they still go through the motions and use the ancient formula, "I believe in Jesus Christ," etc.

And one of the pleasantest things I noticed was, that those old-fashioned twilights still remain, and enrich all the landscape with a dreamy vagueness for two hours after the sun has gone down. It is such a pity they forgot to put in the twilight when they made the Pacific Coast. And it is another pity that they forgot to put in any splendid sunsets, too, when the country is so large, and there would have been such a fine opening for them.