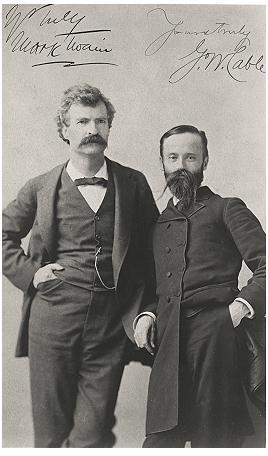 George Washington Cable and Samuel L. Clemens first met in 1881. It appeared that he stood at the threshold of a brilliant career. (pg3 Cardwell). Cable had just caught the attention of the public with his two fresh, promising volumes [from 1879 and 1880]. Although his thinking on questions of race and caste had taken a liberal bias in the 1860's he was not yet marked as a forthright, vocal advocate of civil rights for the Negro and had not yet been widely attacked by southerners for the nonconformist views which were to make him notorious and obnoxious among them. (pg2 Cardwell). Their friendship developed very quickly, culminating in and nearly exploding during their joint lecture tour in 1884-85. (pg 3 Cardwell). Twain himself was green at the job. Believing that all he needed to do was to get out on the platform and read from the book, he did just that and made a botch of it. After a week's experience, he put the book aside and delivered his pieces from memory. Gradually the pieces transformed themselves into flexible talk'. (pg 16 Cardwell [Mark Twain in Eruption pp 215-217])

Mark Twain had not lectured since 1872, the year Roughing It was published. Adventures of Huckleberry Finn was published in 1885. Twain wanted it promoted so he hired Major J.B. Pond to act as agent and the author George Washington Cable to accompanying him on stage. Andrew Levy, in Huck Finn's America, paints a picture of Twain's entrance on the stage for the first show of the tour: The Opera House in New Haven, Connecticut, November 5, 1884 at about 8:40pm.

He walked slowly. One side of him dragged, limped. Perhaps someone in the audience laughed a little nervously, and Twain looked up suddenly. He seemed startled to discover that an audience was present. This caused more people to laugh. Twain now seemed mortified. A few more people laughed, uncomfortably, hopefully.