From St. Louis to St. Joseph 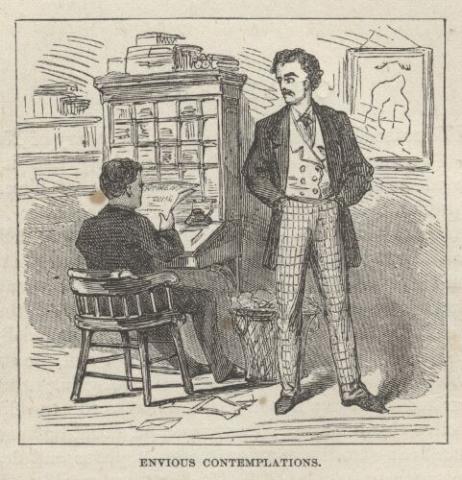 Samuel L. Clemens and Richard Burton both took a steamboat from St. Louis to St. Joseph and neither had much to say about the trip. Burton does address the physical characteristics of the Mississippi River drainage basin and presents arguments as to why the Missouri River should not be considered as the Mississippi's headwaters.

July 18, 1861 Thursday - Orion and Sam left St. Louis on the Sioux City for St. Joseph, Missouri: "We were six days going from St. Louis to “St. Jo.”—a trip that was so dull, and sleepy, and eventless that it has left no more impression on my memory than if its duration had been six minutes instead of that many days. No record is left in my mind, now, concerning it, but a confused jumble of savage-looking snags, which we deliberately walked over with one wheel or the other; and of reefs which we butted and butted, and then retired from and climbed over in some softer place; and of sand-bars which we roosted on occasionally, and rested, and then got out our crutches and sparred over. In fact, the boat might almost as well have gone to St. Jo. by land, for she was walking most of the time, anyhow—climbing over reefs and clambering over snags patiently and laboriously all day long. The captain said she was a “bully” boat, and all she wanted was more “shear” and a bigger wheel. I thought she wanted a pair of stilts, but I had the deep sagacity not to say so."

According to Lieutenant Warren, who endorses the careful examinations of the parties under Governor Stevens in 1853, the Missouri is a superior river for navigation to any in the country, except the Mississippi below their junction. It has, however, serious obstacles in wind and frost.

From the Yellow Stone to its mouth the breadth when full varies from one-third to half a mile: in low water the width shrinks, and bars appear. Where timber does not break the force of the winds, which are most violent in October, clouds of sand are seen for miles, forming banks, which, generally situated at the edges of trees on the islands and points, often so much resemble the Indian mounds in the Mississippi Valley, that some of them - for instance, those described by Lewis and Clarke at Bonhomme Island - have been figured as the works of the ancient Toltecs.

It would hardly be feasible to correct the windage by foresting the land. The bluffs of the Missouri are often clothed with vegetation as far as the debouchure of the Platte River. Above that point the timber, which is chiefly cotton wood, is confined to ravines and bottom lands, varying in width from ten to fifteen miles above Council Bluffs, which is almost continuous to the mouth of the James River. Every where, except between the mouth of the Little Cheyenne and the Cannon Ball rivers, there is a sufficiency of fuel for navigation; but, ascending above Council Bluffs, the protection afforded by forest growth on the banks is constantly diminishing. The trees also are injurious; imbedded in the channel by the "caving-in" of the banks, they form the well-known sawyers, or floating timbers, and snags, trunks standing like chevaux de rise at various inclinations, pointing down the stream.

From the mouth of the James River down to the Mississippi, it is a wonder how a steamer can run; she must lose half her time by laying to at night, and is often delayed for days, as the wind prevents her passing by bends filled with obstructions. The navigation is generally closed by ice at Sioux City on the 10th of November, and at Fort Leavenworth by the 1st of December.

The rainy season of the spring and summer commences in the latitude of Kansas, Missouri, Iowa, and Southern Nebraska, between the 15th of May and the 30th of June, and continues about two months. The floods produced by the melting snows in the mountains come from the Platte, the Big Cheyenne, the Yellow Stone, and the Upper Missouri, reaching the lower river about the 1st of July, and lasting a month.

Rivers like this, whose navigation depends upon temporary floods, are greatly inferior for ascent than for descent. The length of the inundation much depends upon the snow on the mountains: a steamer starting from St Louis on the first indication of the rise would not generally reach the Yellow Stone before low water at the latter point, and if a miscalculation is made by taking the temporary rise for the real inundation, the boat must lay by in the middle of the river till the water deepens.

Some geographers have proposed to transfer to the Missouri, on account of its superior length, the honor of being the real head of the Mississippi; they neglect, however, to consider the direction and the course of the stream, an element which must enter largely in determining the channels of great rivers. It will, I hope, be long before this great ditch wins the day from the glorious Father of Waters.