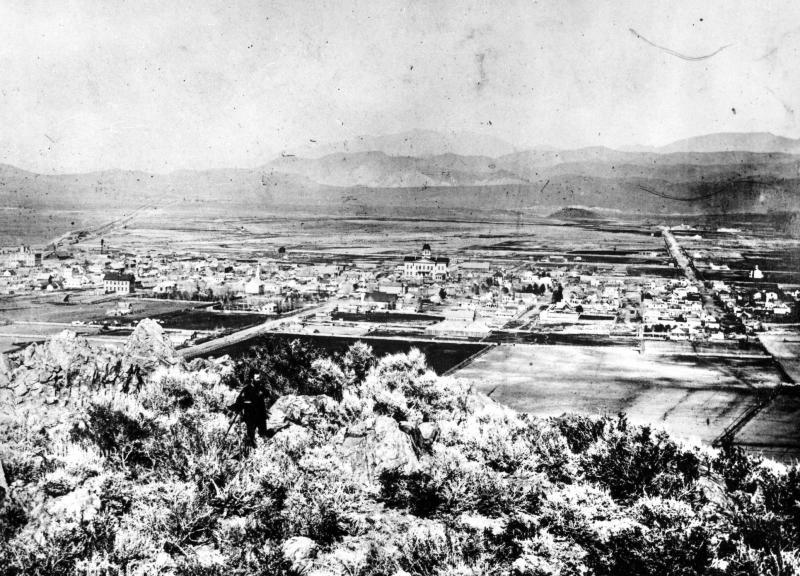 We were approaching the end of our long journey. It was the morning of the twentieth day. At noon we would reach Carson City, the capital of Nevada Territory. We were not glad, but sorry. It had been a fine pleasure trip; we had fed fat on wonders every day; we were now well accustomed to stage life, and very fond of it; so the idea of coming to a stand-still and settling down to a humdrum existence in a village was not agreeable, but on the contrary depressing."

"Visibly our new home was a desert, walled in by barren, snow-clad mountains. There was not a tree in sight. There was no vegetation but the endless sage-brush and greasewood. All nature was gray with it. We were plowing through great deeps of powdery alkali dust that rose in thick clouds and floated across the plain like smoke from a burning house. We were coated with it like millers; so were the coach, the mules, the mail-bags, the driver—we and the sage-brush and the other scenery were all one monotonous color. Long trains of freight wagons in the distance envelope in ascending masses of dust suggested pictures of prairies on fire. These teams and their masters were the only life we saw. Otherwise we moved in the midst of solitude, silence and desolation. Every twenty steps we passed the skeleton of some dead beast of burthen, with its dust-coated skin stretched tightly over its empty ribs. Frequently a solemn raven sat upon the skull or the hips and contemplated the passing coach with meditative serenity."

"By and by Carson City was pointed out to us. It nestled in the edge of a great plain and was a sufficient number of miles away to look like an assemblage of mere white spots in the shadow of a grim range of mountains overlooking it, whose summits seemed lifted clear out of companionship and consciousness of earthly things."

"We arrived, disembarked, and the stage went on. It was a “wooden” town; its population two thousand souls. The main street consisted of four or five blocks of little white frame stores which were too high to sit down on, but not too high for various other purposes; in fact, hardly high enough. They were packed close together, side by side, as if room were scarce in that mighty plain." "The sidewalk was of boards that were more or less loose and inclined to rattle when walked upon. In the middle of the town, opposite the stores, was the “plaza” which is native to all towns beyond the Rocky Mountains—a large, unfenced, level vacancy, with a liberty pole in it, and very useful as a place for public auctions, horse trades, and mass meetings, and likewise for teamsters to camp in. Two other sides of the plaza were faced by stores, offices and stables." "The rest of Carson City was pretty scattering."

We had been preceded on the way by a young man, driving in a light cart a pair of horses, which looked remarkable by the side of the usual Californian teams, three pair with the near wheeler ridden. Arriving at a bad place he kindly called out to us, but before his warning could be taken a soft and yielding sensation, succeeded by a decided leaning to the right, and ending with a loud crash, announced an overturn. In due time we were extricated, the pieces were picked up, and though the gun was broken the bottle of cocktail fortunately remained whole. The judge, probably and justly offended by my evil habit of laughing out of season, informed us that he had never been thrown before, an announcement which made us expect more spills. The unhappy Kennedy had jumped off before the wheels pointed up hill; he had not lost a hoof, it is true, on the long march, but he wept spirits and water at the disappointing thought that the ambulance, this time drawn by his best team, and laden with all the dignities, had come to grief, and would not be fit to be seen. After 100 yards more another similar series of sensations announced a repetition of the scene, which deserved the epitaph,

This time, however, falling down a bank, we "came to smash," the bottle (eheu!) was broken, so was the judge's head, while the ear of the judgeling - serve him right for chaffing! - was cut, the pistols and powder flasks were half buried in the sand, a variety of small objects were lost, and the flying gear of the ambulance was a perfect wreck. Unwilling to risk our necks by another trial, we walked over the rest of the rough ground, and conducted by the good Croly, found our way to Dutch Nick's, a ranch and tavern, apparently much frequented by the teamsters and other roughs, who seemed, honest fellows! deeply to regret that the accident had not been much more serious. Remounting, after a time, we sped forward, and sighted in front a dark line, but partially lit up about the flanks, with a brilliant illumination in the centre, the Kursaal of Mr Hopkins, the local Crockford. Our entrance to Penrod House, the Fifth Avenue of Carson City, was by no means of a triumphal order; Nature herself seemed to sympathize with us, besplashing us with tears heavier than Mr Kennedy's. But after a good supper and change of raiment, a cigar, "something warm," and the certainty of a bed combined to diffuse over our minds the calm satisfaction of having surmounted our difficulties tant bien que mal.

Sam and Orion arrived in Carson August 14, 1861.  Except for trips to Lake Tahoe and the Esmeralda mines Sam remained there until December.  Most of this time Sam stayed in a boarding house run by Mrs. O'Flannigan (his name for her).

Sam relocated to Aurora and then to Virginia City but frequently returned to cover legislative sessions for the Territorial Enterprise.  He stayed with Orion's family on those visits.  Sam departed Nevada in May of 1864 but returned on lecture trips in November of 1866 and April of 1868.