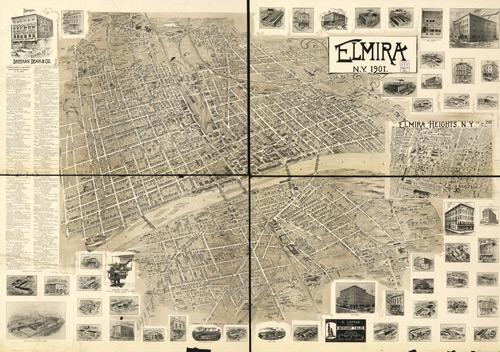 Elmira was the home of Jervis Langdon, Twain's father-in-law and where Sam Clemens married Olivia Langdon.  Susan Crane, Livy's sister lived at Quarry Farm, just outside of Elmira, where the Clemens family spent most of their summers.  Sam moved his family to Elmira in 1895 after their long residence in Europe.  His last visit to the city was kn April of 1903.

Elmira ollege is the home of the Center for Mark Twain Studies and now owns the Quarry Farm home.  All members of the Clemens and Langdon family are buried at Elmira's Woodlawn Cemetery.

In historic times this area was occupied by the Cayuga nation of the Iroquois Confederacy. They had some relations with Europeans and English over fur trading, but were relatively isolated from the encroaching settlements. During the American Revolutionary War, the Sullivan Expedition of 1779 was mounted against the four Iroquois nations who had allied with the British and Loyalist forces. It fought a combined British-Iroquois force at the Battle of Newtown, south of the current city. In 1791, the Iroquois and the new United States made a treaty at Elmira to settle territorial disputes in the region. Most of the Seneca emigrated under pressure with the other Iroquois to Canada, where they resettled on land provided by the British Crown.

Elmira served as a transportation hub for New York's Southern Tier in the 1800s, connecting commercial centers in Rochester and Buffalo with Albany and New York City, via the canal system and railroads. The city was the southern terminus of the Chemung Canal (completed in 1833); later, the Junction Canal was constructed to connect Elmira with Corning, facilitating transport of coal from the Pennsylvania mines via the Northern branch of the Susquehanna Canal system. In 1849, the New York and Erie Railroad was built through Elmira, giving the area a New York City to Buffalo route. In 1850, the Elmira and Jefferson Railroad gave the area a route north and the Elmira and Williamsport Railroad a route south in 1854. This made the city a prime location for an Army training and muster point early in the Civil War. In 1872 the Utica Ithaca and Elmira Railroad was begun, eventually creating a route to Cortland and Syracuse via Horseheads, Breesport and Van Etten. The Delaware, Lackawanna and Western Railroad was completed in 1884, which competed with the Erie's New York City to Buffalo line.