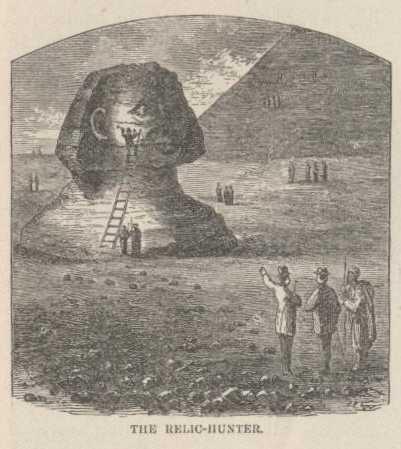 Quaker City Makes Port in Alexandria:  After a pleasant voyage and a good rest, we drew near to Egypt and out of the mellowest of sunsets we saw the domes and minarets of Alexandria rise into view. As soon as the anchor was down, Jack and I got a boat and went ashore. It was night by this time, and the other passengers were content to remain at home and visit ancient Egypt after breakfast. It was the way they did at Constantinople. They took a lively interest in new countries, but their school-boy impatience had worn off, and they had learned that it was wisdom to take things easy and go along comfortably—these old countries do not go away in the night; they stay till after breakfast. When we reached the pier we found an army of Egyptian boys with donkeys no larger than themselves, waiting for passengers—for donkeys are the omnibuses of Egypt. We preferred to walk, but we could not have our own way. The boys crowded about us, clamored around us, and slewed their donkeys exactly across our path, no matter which way we turned. They were good-natured rascals, and so were the donkeys. We mounted, and the boys ran behind us and kept the donkeys in a furious gallop, as is the fashion at Damascus. I believe I would rather ride a donkey than any beast in the world. He goes briskly, he puts on no airs, he is docile, though opinionated. Satan himself could not scare him, and he is convenient—very convenient. When you are tired riding you can rest your feet on the ground and let him gallop from under you. We found the hotel and secured rooms, and were happy to know that the Prince of Wales had stopped there once. They had it every where on signs. No other princes had stopped there since, till Jack and I came. We went abroad through the town, then, and found it a city of huge commercial buildings, and broad, handsome streets brilliant with gas-light. By night it was a sort of reminiscence of Paris. But finally Jack found an ice-cream saloon, and that closed investigations for that evening. The weather was very hot, it had been many a day since Jack had seen ice-cream, and so it was useless to talk of leaving the saloon till it shut up. In the morning the lost tribes of America came ashore and infested the hotels and took possession of all the donkeys and other open barouches that offered. They went in picturesque procession to the American Consul’s; to the great gardens; to Cleopatra’s Needles; to Pompey’s Pillar; to the palace of the Viceroy of Egypt; to the Nile; to the superb groves of date-palms. One of our most inveterate relic-hunters had his hammer with him, and tried to break a fragment off the upright Needle and could not do it; he tried the prostrate one and failed; he borrowed a heavy sledge hammer from a mason and tried again. He tried Pompey’s Pillar, and this baffled him. Scattered all about the mighty monolith were sphinxes of noble countenance, carved out of Egyptian granite as hard as blue steel, and whose shapely features the wear of five thousand years had failed to mark or mar. The relic-hunter battered at these persistently, and sweated profusely over his work. He might as well have attempted to deface the moon. They regarded him serenely with the stately smile they had worn so long, and which seemed to say, “Peck away, poor insect; we were not made to fear such as you; in ten-score dragging ages we have seen more of your kind than there are sands at your feet: have they left a blemish upon us?

The Road to Old Cairo

The donkeys were all good, all handsome, all strong and in good condition, all fast and all willing to prove it. They were the best we had found any where, and the most ‘recherche’. I do not know what ‘recherche’ is, but that is what these donkeys were, anyhow. Some were of a soft mouse-color, and the others were white, black, and vari-colored. Some were close-shaven, all over, except that a tuft like a paint-brush was left on the end of the tail.

The Great Pyramid of Cheops

At the distance of a few miles the Pyramids rising above the palms, looked very clean-cut, very grand and imposing, and very soft and filmy, as well. They swam in a rich haze that took from them all suggestions of unfeeling stone, and made them seem only the airy nothings of a dream—structures which might blossom into tiers of vague arches, or ornate colonnades, may be, and change and change again, into all graceful forms of architecture, while we looked, and then melt deliciously away and blend with the tremulous atmosphere.

After years of waiting, it was before me at last. The great face was so sad, so earnest, so longing, so patient. There was a dignity not of earth in its mien, and in its countenance a benignity such as never any thing human wore. It was stone, but it seemed sentient. If ever image of stone thought, it was thinking. It was looking toward the verge of the landscape, yet looking at nothing—nothing but distance and vacancy. It was looking over and beyond every thing of the present, and far into the past.

We were glad to have seen the land which was the mother of civilization—which taught Greece her letters, and through Greece Rome, and through Rome the world; the land which could have humanized and civilized the hapless children of Israel, but allowed them to depart out of her borders little better than savages. We were glad to have seen that land which had an enlightened religion with future eternal rewards and punishment in it, while even Israel’s religion contained no promise of a hereafter.