Innocents in the Ottoman Empire 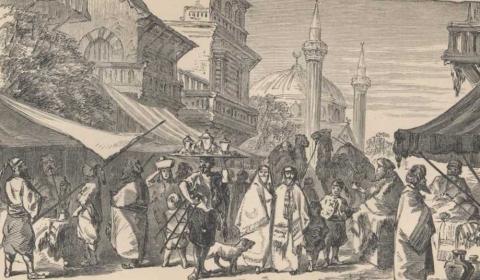 From Greece to Constantinople:

We sailed through the barren Archipelago, and into the narrow channel they sometimes call the Dardanelles and sometimes the Hellespont. This part of the country is rich in historic reminiscences, and poor as Sahara in every thing else. For instance, as we approached the Dardanelles, we coasted along the Plains of Troy and past themouth of the Scamander; we saw where Troy had stood (in the distance,) and where it does not stand now—a city that perished when the world was young. The poor Trojans are all dead, now. They were born too late to see Noah’s ark, and died too soon to see our menagerie. We saw where Agamemnon’s fleets rendezvoused, and away inland a mountain which the map said was Mount Ida. Within the Hellespont we saw where the original first shoddy contract mentioned in history was carried out, and the “parties of the second part” gently rebuked by Xerxes. I speak of the famous bridge of boats which Xerxes ordered to be built over the narrowest part of the Hellespont (where it is only two or three miles wide.) A moderate gale destroyed the flimsy structure, and the King, thinking that to publicly rebuke the contractors might have a good effect on the next set, called them out before the army and had them beheaded. In the next ten minutes he let a new contract for the bridge. It has been observed by ancient writers that the second bridge was a very good bridge. Xerxes crossed his host of five millions of men on it, and if it had not been purposely destroyed, it would probably have been there yet. If our Government would rebuke some of our shoddy contractors occasionally, it might work much good. In the Hellespont we saw where Leander and Lord Byron swam across, the one to see her upon whom his soul’s affections were fixed with a devotion that only death could impair, and the other merely for a flyer, as Jack says. We had two noted tombs near us, too. On one shore slept Ajax, and on the other Hecuba. We had water batteries and forts on both sides of the Hellespont, flying the crimson flag of Turkey, with its white crescent, and occasionally a village, and sometimes a train of camels; we had all these to look at till we entered the broad sea of Marmora, and then the land soon fading from view, we resumed euchre and whist once more. We dropped anchor in the mouth of the Golden Horn at daylight in the morning. Only three or four of us were up to see the great Ottoman capital. The passengers do not turn out at unseasonable hours, as they used to, to get the earliest possible glimpse of strange foreign cities. They are well over that. If we were lying in sight of the Pyramids of Egypt, they would not come on deck until after breakfast, now-a-days. The Golden Horn is a narrow arm of the sea, which branches from the Bosporus (a sort of broad river which connects the Marmora and Black Seas,) and, curving around, divides the city in the middle. Galata and Pera are on one side of the Bosporus, and the Golden Horn; Stamboul (ancient Byzantium) is upon the other. On the other bank of the Bosporus is Scutari and other suburbs of Constantinople. This great city contains a million inhabitants, but so narrow are its streets, and so crowded together are its houses, that it does not cover much more than half as much ground as New York City. Seen from the anchorage or from a mile or so up the Bosporus, it is by far the handsomest city we have seen. Its dense array of houses swells upward from the water’s edge, and spreads over the domes of many hills; and the gardens that peep out here and there, the great globes of the mosques, and the countless minarets that meet the eye every where, invest the metropolis with the quaint Oriental aspect one dreams of when he reads books of eastern travel. Constantinople makes a noble picture.

Taking a Caique to Shore:

But its attractiveness begins and ends with its picturesqueness. From the time one starts ashore till he gets back again, he execrates it. The boat he goes in is admirably miscalculated for the service it is built for. It is handsomely and neatly fitted up, but no man could handle it well in the turbulent currents that sweep down the Bosporus from the Black Sea, and few men could row it satisfactorily even in still water. It is a long, light canoe (caique,) large at one end and tapering to a knife blade at the other. They make that long sharp end the bow, and you can imagine how these boiling currents spin it about. It has two oars, and sometimes four, and no rudder. You start to go to a given point and you run in fifty different directions before you get there. First one oar is backing water, and then the other; it is seldom that both are going ahead at once. This kind of boating is calculated to drive an impatient man mad in a week. The boatmen are the awkwardest, the stupidest, and the most unscientific on earth, without question.

The Quaker City traveled to Russia briefly and included a visit with the Tsar. Then returned to Constantinople.

On to Asia, Smyrna and Ephesus:

We returned to Constantinople, and after a day or two spent in exhausting marches about the city and voyages up the Golden Horn in caiques, we steamed away again. We passed through the Sea of Marmora and the Dardanelles, and steered for a new land—a new one to us, at least—Asia. We had as yet only acquired a bowing acquaintance with it, through pleasure excursions to Scutari and the regions round about. We passed between Lemnos and Mytilene, and saw them as we had seen Elba and the Balearic Isles—mere bulky shapes, with the softening mists of distance upon them—whales in a fog, as it were. Then we held our course southward, and began to “read up” celebrated Smyrna.

And then, to Beirut and the Holy Land:

We sailed from Smyrna, in the wildest spirit of expectancy, for the chief feature, the grand goal of the expedition, was near at hand—we were approaching the Holy Land! Such a burrowing into the hold for trunks that had lain buried for weeks, yes for months; such a hurrying to and fro above decks and below; such a riotous system of packing and unpacking; such a littering up of the cabins with shirts and skirts, and indescribable and unclassable odds and ends; such a making up of bundles, and setting apart of umbrellas, green spectacles and thick veils; such a critical inspection of saddles and bridles that had never yet touched horses; such a cleaning and loading of revolvers and examining of bowie-knives; such a half-soling of the seats of pantaloons with serviceable buckskin; then such a poring over ancient maps; such a reading up of Bibles and Palestine travels; such a marking out of routes; such exasperating efforts to divide up the company into little bands of congenial spirits who might make the long and arduous Journey without quarreling; and morning, noon and night, such mass-meetings in the cabins, such speech-making, such sage suggesting, such worrying and quarreling, and such a general raising of the very mischief, was never seen in the ship before!

Ashore, it was—well, it was an eternal circus. People were thicker than bees, in those narrow streets, and the men were dressed in all the outrageous, outlandish, idolatrous, extravagant, thunder-and-lightning costumes that ever a tailor with the delirium tremens and seven devils could conceive of. There was no freak in dress too crazy to be indulged in; no absurdity too absurd to be tolerated; no frenzy in ragged diabolism too fantastic to be attempted. No two men were dressed alike.

The Port of Smyrna

This has been a stirring day. The Superintendent of the railway put a train at our disposal, and did us the further kindness of accompanying us to Ephesus and giving to us his watchful care. We brought sixty scarcely perceptible donkeys in the freight cars, for we had much ground to go over. We have seen some of the most grotesque costumes, along the line of the railroad, that can be imagined. I am glad that no possible combination of words could describe them, for I might then be foolish enough to attempt it.

“Palestine is desolate and unlovely. And why should it be otherwise? Can the curse of the Deity beautify a land? Palestine is no more of this workday world. It is sacred to poetry and tradition - it is dreamland.” With these words Mark Twain closed his pilgrimage to Palestine, and in them can be seen the complex attitude of nineteenth-century Americans toward the Orient. For many nineteenth-century Americans, Palestine was a dreamland, a region of the world to be visited through the Bible and travel literature.