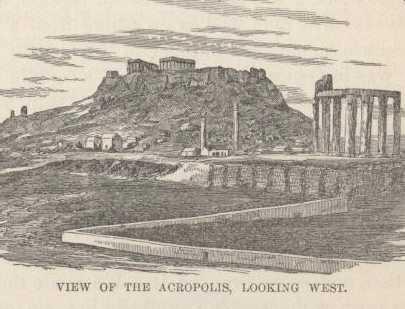 Home, again! For the first time, in many weeks, the ship’s entire family met and shook hands on the quarter-deck. They had gathered from many points of the compass and from many lands, but not one was missing; there was no tale of sickness or death among the flock to dampen the pleasure of the reunion. Once more there was a full audience on deck to listen to the sailors’ chorus as they got the anchor up, and to wave an adieu to the land as we sped away from Naples. The seats were full at dinner again, the domino parties were complete, and the life and bustle on the upper deck in the fine moonlight at night was like old times—old times that had been gone weeks only, but yet they were weeks so crowded with incident, adventure and excitement, that they seemed almost like years. There was no lack of cheerfulness on board the Quaker City. For once, her title was a misnomer. At seven in the evening, with the western horizon all golden from the sunken sun, and specked with distant ships, the full moon sailing high over head, the dark blue of the sea under foot, and a strange sort of twilight affected by all these different lights and colors around us and about us, we sighted superb Stromboli. With what majesty the monarch held his lonely state above the level sea! Distance clothed him in a purple gloom, and added a veil of shimmering mist that so softened his rugged features that we seemed to see him through a web of silver gauze. His torch was out; his fires were smoldering; a tall column of smoke that rose up and lost itself in the growing moonlight was all the sign he gave that he was a living Autocrat of the Sea and not the spectre of a dead one.

Through the Straits of Messina:

At two in the morning we swept through the Straits of Messina, and so bright was the moonlight that Italy on the one hand and Sicily on the other seemed almost as distinctly visible as though we looked at them from the middle of a street we were traversing. The city of Messina, milk-white, and starred and spangled all over with gaslights, was a fairy spectacle. A great party of us were on deck smoking and making a noise, and waiting to see famous Scylla and Charybdis. And presently the Oracle stepped out with his eternal spy-glass and squared himself on the deck like another Colossus of Rhodes. It was a surprise to see him abroad at such an hour. Nobody supposed he cared anything about an old fable like that of Scylla and Charybdis. One of the boys said: “Hello, doctor, what are you doing up here at this time of night?—What do you want to see this place for?” “What do I want to see this place for? Young man, little do you know me, or you wouldn’t ask such a question. I wish to see all the places that’s mentioned in the Bible.” “Stuff—this place isn’t mentioned in the Bible.” “It ain’t mentioned in the Bible!—this place ain’t—well now, what place is this, since you know so much about it?” “Why it’s Scylla and Charybdis.” “Scylla and Cha—confound it, I thought it was Sodom and Gomorrah!

Along the Isles of Greece:

We spent one pleasant day skirting along the Isles of Greece. They are very mountainous. Their prevailing tints are gray and brown, approaching to red. Little white villages surrounded by trees, nestle in the valleys or roost upon the lofty perpendicular sea-walls. We had one fine sunset—a rich carmine flush that suffused the western sky and cast a ruddy glow far over the sea.—Fine sunsets seem to be rare in this part of the world—or at least, striking ones. They are soft, sensuous, lovely—they are exquisite refined, effeminate, but we have seen no sunsets here yet like the gorgeous conflagrations that flame in the track of the sinking sun in our high northern latitudes. But what were sunsets to us, with the wild excitement upon us of approaching the most renowned of cities! What cared we for outward visions, when Agamemnon, Achilles, and a thousand other heroes of the great Past were marching in ghostly procession through our fancies? What were sunsets to us, who were about to live and breathe and walk in actual Athens; yea, and go far down into the dead centuries and bid in person for the slaves, Diogenes and Plato, in the public market-place, or gossip with the neighbors about the siege of Troy or the splendid deeds of Marathon? We scorned to consider sunsets.

We arrived, and entered the ancient harbor of the Piraeus at last. We dropped anchor within half a mile of the village. Away off, across the undulating Plain of Attica, could be seen a little square-topped hill with a something on it, which our glasses soon discovered to be the ruined edifices of the citadel of the Athenians, and most prominent among them loomed the venerable Parthenon. So exquisitely clear and pure is this wonderful atmosphere that every column of the noble structure was discernible through the telescope, and even the smaller ruins about it assumed some semblance of shape. This at a distance of five or six miles. In the valley, near the Acropolis, (the square-topped hill before spoken of,) Athens itself could be vaguely made out with an ordinary lorgnette. Every body was anxious to get ashore and visit these classic localities as quickly as possible. No land we had yet seen had aroused such universal interest among the passengers. But bad news came. The commandant of the Piraeus came in his boat, and said we must either depart or else get outside the harbor and remain imprisoned in our ship, under rigid quarantine, for eleven days! So we took up the anchor and moved outside, to lie a dozen hours or so, taking in supplies, and then sail for Constantinople. It was the bitterest disappointment we had yet experienced. To lie a whole day in sight of the Acropolis, and yet be obliged to go away without visiting Athens! Disappointment was hardly a strong enough word to describe the circumstances.

We inquired of every body who came near the ship, whether there were guards in the Piraeus, whether they were strict, what the chances were of capture should any of us slip ashore, and in case any of us made the venture and were caught, what would be probably done to us? The answers were discouraging: There was a strong guard or police force; the Piraeus was a small town, and any stranger seen in it would surely attract attention—capture would be certain.

The Condition of Greece

From Athens all through the islands of the Grecian Archipelago, we saw little but forbidding sea-walls and barren hills, sometimes surmounted by three or four graceful columns of some ancient temple, lonely and deserted—a fitting symbol of the desolation that has come upon all Greece in these latter ages. We saw no ploughed fields, very few villages, no trees or grass or vegetation of any kind, scarcely, and hardly ever an isolated house. Greece is a bleak, unsmiling desert, without agriculture, manufactures or commerce, apparently.