The Condition of Greece

From Athens all through the islands of the Grecian Archipelago, we saw little but forbidding sea-walls and barren hills, sometimes surmounted by three or four graceful columns of some ancient temple, lonely and deserted—a fitting symbol of the desolation that has come upon all Greece in these latter ages. We saw no ploughed fields, very few villages, no trees or grass or vegetation of any kind, scarcely, and hardly ever an isolated house. Greece is a bleak, unsmiling desert, without agriculture, manufactures or commerce, apparently. What supports its poverty-stricken people or its Government, is a mystery.

I suppose that ancient Greece and modern Greece compared, furnish the most extravagant contrast to be found in history. George I., an infant of eighteen, and a scraggy nest of foreign office holders, sit in the places of Themistocles, Pericles, and the illustrious scholars and generals of the Golden Age of Greece. The fleets that were the wonder of the world when the Parthenon was new, are a beggarly handful of fishing-smacks now, and the manly people that performed such miracles of valor at Marathon are only a tribe of unconsidered slaves to-day. The classic Illyssus has gone dry, and so have all the sources of Grecian wealth and greatness. The nation numbers only eight hundred thousand souls, and there is poverty and misery and mendacity enough among them to furnish forty millions and be liberal about it. Under King Otho the revenues of the State were five millions of dollars—raised from a tax of one-tenth of all the agricultural products of the land (which tenth the farmer had to bring to the royal granaries on pack-mules any distance not exceeding six leagues) and from extravagant taxes on trade and commerce. Out of that five millions the small tyrant tried to keep an army of ten thousand men, pay all the hundreds of useless Grand Equerries in Waiting, First Grooms of the Bedchamber, Lord High Chancellors of the Exploded Exchequer, and all the other absurdities which these puppy-kingdoms indulge in, in imitation of the great monarchies; 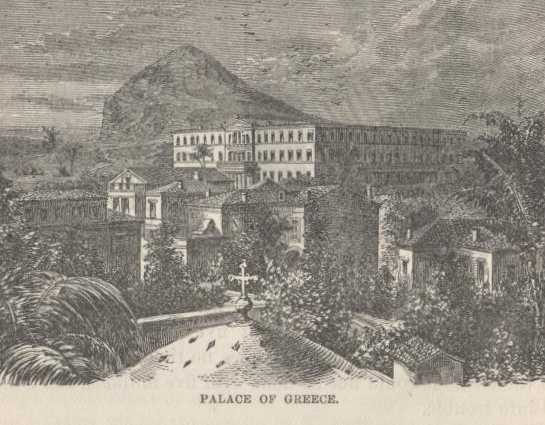 and in addition he set about building a white marble palace to cost about five millions itself. The result was, simply: ten into five goes no times and none over. All these things could not be done with five millions, and Otho fell into trouble.

The Greek throne, with its unpromising adjuncts of a ragged population of ingenious rascals who were out of employment eight months in the year because there was little for them to borrow and less to confiscate, and a waste of barren hills and weed-grown deserts, went begging for a good while. It was offered to one of Victoria’s sons, and afterwards to various other younger sons of royalty who had no thrones and were out of business, but they all had the charity to decline the dreary honor, and veneration enough for Greece’s ancient greatness to refuse to mock her sorrowful rags and dirt with a tinsel throne in this day of her humiliation—till they came to this young Danish George, and he took it. He has finished the splendid palace I saw in the radiant moonlight the other night, and is doing many other things for the salvation of Greece, they say.