Ashore, it was—well, it was an eternal circus. People were thicker than bees, in those narrow streets, and the men were dressed in all the outrageous, outlandish, idolatrous, extravagant, thunder-and-lightning costumes that ever a tailor with the delirium tremens and seven devils could conceive of. There was no freak in dress too crazy to be indulged in; no absurdity too absurd to be tolerated; no frenzy in ragged diabolism too fantastic to be attempted. No two men were dressed alike. It was a wild masquerade of all imaginable costumes—every struggling throng in every street was a dissolving view of stunning contrasts. Some patriarchs wore awful turbans, but the grand mass of the infidel horde wore the fiery red skull-cap they call a fez. All the remainder of the raiment they indulged in was utterly indescribable.

The shops here are mere coops, mere boxes, bath-rooms, closets—any thing you please to call them—on the first floor. The Turks sit cross-legged in them, and work and trade and smoke long pipes, and smell like—like Turks. That covers the ground. Crowding the narrow streets in front of them are beggars, who beg forever, yet never collect any thing; and wonderful cripples, distorted out of all semblance of humanity, almost; vagabonds driving laden asses; porters carrying dry-goods boxes as large as cottages on their backs; peddlers of grapes, hot corn, pumpkin seeds, and a hundred other things, yelling like fiends; and sleeping happily, comfortably, serenely, among the hurrying feet, are the famed dogs of Constantinople; drifting noiselessly about are squads of Turkish women, draped from chin to feet in flowing robes, and with snowy veils bound about their heads, that disclose only the eyes and a vague, shadowy notion of their features. Seen moving about, far away in the dim, arched aisles of the Great Bazaar, they look as the shrouded dead must have looked when they walked forth from their graves amid the storms and thunders and earthquakes that burst upon Calvary that awful night of the Crucifixion. A street in Constantinople is a picture which one ought to see once—not oftener. 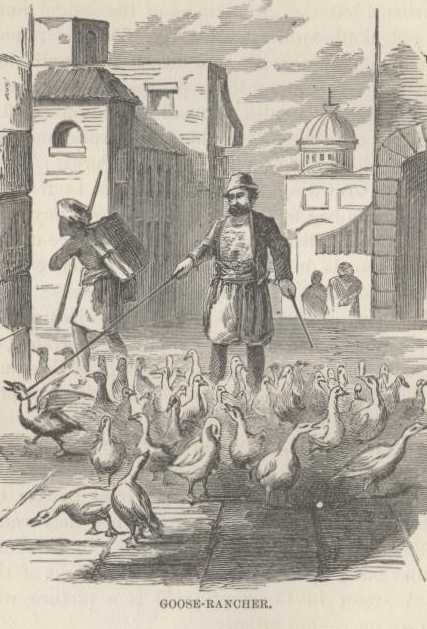 And then there was the goose-rancher—a fellow who drove a hundred geese before him about the city, and tried to sell them. He had a pole ten feet long, with a crook in the end of it, and occasionally a goose would branch out from the flock and make a lively break around the corner, with wings half lifted and neck stretched to its utmost. Did the goose-merchant get excited? No. He took his pole and reached after that goose with unspeakable sang froid—took a hitch round his neck, and “yanked” him back to his place in the flock without an effort. He steered his geese with that stick as easily as another man would steer a yawl. A few hours afterward we saw him sitting on a stone at a corner, in the midst of the turmoil, sound asleep in the sun, with his geese squatting around him, or dodging out of the way of asses and men. We came by again, within the hour, and he was taking account of stock, to see whether any of his flock had strayed or been stolen. The way he did it was unique. He put the end of his stick within six or eight inches of a stone wall, and made the geese march in single file between it and the wall. He counted them as they went by. There was no dodging that arrangement.

If you want dwarfs—I mean just a few dwarfs for a curiosity—go to Genoa. If you wish to buy them by the gross, for retail, go to Milan. There are plenty of dwarfs all over Italy, but it did seem to me that in Milan the crop was luxuriant. If you would see a fair average style of assorted cripples, go to Naples, or travel through the Roman States. But if you would see the very heart and home of cripples and human monsters, both, go straight to Constantinople. A beggar in Naples who can show a foot which has all run into one horrible toe, with one shapeless nail on it, has a fortune—but such an exhibition as that would not provoke any notice in Constantinople. The man would starve. Who would pay any attention to attractions like his among the rare monsters that throng the bridges of the Golden Horn and display their deformities in the gutters of Stamboul? O, wretched impostor! How could he stand against the three-legged woman, and the man with his eye in his cheek? How would he blush in presence of the man with fingers on his elbow? Where would he hide himself when the dwarf with seven fingers on each hand, no upper lip, and his under-jaw gone, came down in his majesty? Bismillah! The cripples of Europe are a delusion and a fraud. The truly gifted flourish only in the by-ways of Pera and Stamboul.

That three-legged woman lay on the bridge, with her stock in trade so disposed as to command the most striking effect—one natural leg, and two long, slender, twisted ones with feet on them like somebody else’s fore-arm. Then there was a man further along who had no eyes, and whose face was the color of a fly-blown beefsteak, and wrinkled and twisted like a lava-flow—and verily so tumbled and distorted were his features that no man could tell the wart that served him for a nose from his cheek-bones. In Stamboul was a man with a prodigious head, an uncommonly long body, legs eight inches long and feet like snow-shoes. He traveled on those feet and his hands, and was as sway-backed as if the Colossus of Rhodes had been riding him. Ah, a beggar has to have exceedingly good points to make a living in Constantinople. A blue-faced man, who had nothing to offer except that he had been blown up in a mine, would be regarded as a rank impostor, and a mere damaged soldier on crutches would never make a cent. It would pay him to get apiece of his head taken off, and cultivate a wen like a carpet sack.

We left a dozen passengers in Constantinople, and sailed through the beautiful Bosporus and far up into the Black Sea. We left them in the clutches of the celebrated Turkish guide, “FAR-AWAY MOSES,” who will seduce them into buying a ship-load of ottar of roses, splendid Turkish vestments, and all manner of curious things they can never have any use for.

The Mosque of St. Sophia

The Mosque of St. Sophia is the chief lion of Constantinople. You must get a firman and hurry there the first thing. We did that. We did not get a firman, but we took along four or five francs apiece, which is much the same thing.

We visited the Dancing Dervishes. There were twenty-one of them. They wore a long, light-colored loose robe that hung to their heels. Each in his turn went up to the priest (they were all within a large circular railing) and bowed profoundly and then went spinning away deliriously and took his appointed place in the circle, and continued to spin. When all had spun themselves to their places, they were about five or six feet apart—and so situated, the entire circle of spinning pagans spun itself three separate times around the room. It took twenty-five minutes to do it.

Mausoleum of the Sultan Mahmoud 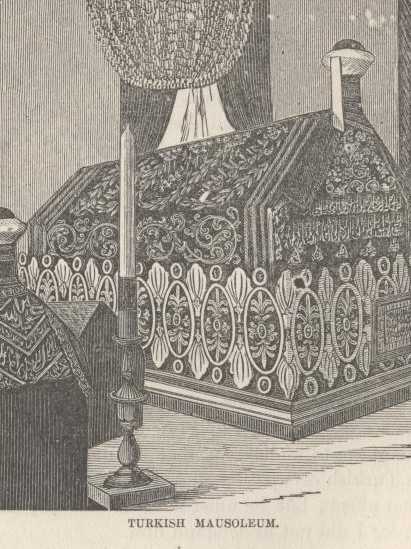 We took off our shoes and went into the marble mausoleum of the Sultan Mahmoud, the neatest piece of architecture, inside, that I have seen lately.

Thousand and One Columns

We visited the Thousand and One Columns. I do not know what it was originally intended for, but they said it was built for a reservoir. It is situated in the centre of Constantinople. You go down a flight of stone steps in the middle of a barren place, and there you are. You are forty feet under ground, and in the midst of a perfect wilderness of tall, slender, granite columns, of Byzantine architecture.

The Great Bazaar in Stamboul

We went to the great Bazaar in Stamboul, of course, and I shall not describe it further than to say it is a monstrous hive of little shops—thousands, I should say—all under one roof, and cut up into innumerable little blocks by narrow streets which are arched overhead. One street is devoted to a particular kind of merchandise, another to another, and so on.