The Port of Smyrna 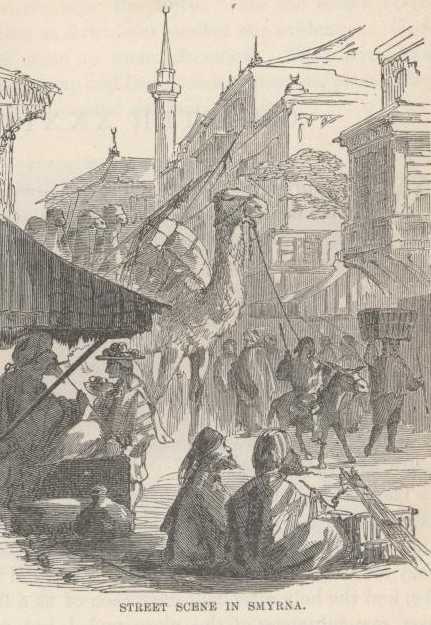 This seaport of Smyrna, our first notable acquaintance in Asia, is a closely packed city of one hundred and thirty thousand inhabitants, and, like Constantinople, it has no outskirts. It is as closely packed at its outer edges as it is in the centre, and then the habitations leave suddenly off and the plain beyond seems houseless. It is just like any other Oriental city. That is to say, its Moslem houses are heavy and dark, and as comfortless as so many tombs; its streets are crooked, rudely and roughly paved, and as narrow as an ordinary staircase; the streets uniformly carry a man to any other place than the one he wants to go to, and surprise him by landing him in the most unexpected localities; business is chiefly carried on in great covered bazaars, celled like a honeycomb with innumerable shops no larger than a common closet, and the whole hive cut up into a maze of alleys about wide enough to accommodate a laden camel, and well calculated to confuse a stranger and eventually lose him; every where there is dirt, every where there are fleas, every where there are lean, broken-hearted dogs; every alley is thronged with people; wherever you look, your eye rests upon a wild masquerade of extravagant costumes; the workshops are all open to the streets, and the workmen visible; all manner of sounds assail the ear, and over them all rings out the muezzin’s cry from some tall minaret, calling the faithful vagabonds to prayer; and superior to the call to prayer, the noises in the streets, the interest of the costumes—superior to every thing, and claiming the bulk of attention first, last, and all the time—is a combination of Mohammedan stenches, to which the smell of even a Chinese quarter would be as pleasant as the roasting odors of the fatted calf to the nostrils of the returning Prodigal. Such is Oriental luxury—such is Oriental splendor! We read about it all our days, but we comprehend it not until we see it.

Smyrna is a very old city. Its name occurs several times in the Bible, one or two of the disciples of Christ visited it, and here was located one of the original seven apocalyptic churches spoken of in Revelations. These churches were symbolized in the Scriptures as candlesticks, and on certain conditions there was a sort of implied promise that Smyrna should be endowed with a “crown of life.” She was to “be faithful unto death”—those were the terms. She has not kept up her faith straight along, but the pilgrims that wander hither consider that she has come near enough to it to save her, and so they point to the fact that Smyrna to-day wears her crown of life, and is a great city, with a great commerce and full of energy, while the cities wherein were located the other six churches, and to which no crown of life was promised, have vanished from the earth. So Smyrna really still possesses her crown of life, in a business point of view. Her career, for eighteen centuries, has been a chequered one, and she has been under the rule of princes of many creeds, yet there has been no season during all that time, as far as we know, (and during such seasons as she was inhabited at all,) that she has been without her little community of Christians “faithful unto death.” Hers was the only church against which no threats were implied in the Revelations, and the only one which survived.

With Ephesus, forty miles from here, where was located another of the seven churches, the case was different. The “candlestick” has been removed from Ephesus. Her light has been put out. Pilgrims, always prone to find prophecies in the Bible, and often where none exist, speak cheerfully and complacently of poor, ruined Ephesus as the victim of prophecy. And yet there is no sentence that promises, without due qualification, the destruction of the city. The words are:
“Remember, therefore, from whence thou art fallen, and repent, and do the first works; or else I will come unto thee quickly, and will remove thy candlestick out of his place, except thou repent.”
That is all; the other verses are singularly complimentary to Ephesus. The threat is qualified. There is no history to show that she did not repent. But the cruelest habit the modern prophecy-savans have, is that one of coolly and arbitrarily fitting the prophetic shirt on to the wrong man. They do it without regard to rhyme or reason. Both the cases I have just mentioned are instances in point. Those “prophecies” are distinctly leveled at the “churches of Ephesus, Smyrna,” etc., and yet the pilgrims invariably make them refer to the cities instead. No crown of life is promised to the town of Smyrna and its commerce, but to the handful of Christians who formed its “church.” If they were “faithful unto death,” they have their crown now—but no amount of faithfulness and legal shrewdness combined could legitimately drag the city into a participation in the promises of the prophecy. The stately language of the Bible refers to a crown of life whose lustre will reflect the day-beams of the endless ages of eternity, not the butterfly existence of a city built by men’s hands, which must pass to dust with the builders and be forgotten even in the mere handful of centuries vouchsafed to the solid world itself between its cradle and its grave.

The fashion of delving out fulfillments of prophecy where that prophecy consists of mere “ifs,” trenches upon the absurd. Suppose, a thousand years from now, a malarious swamp builds itself up in the shallow harbor of Smyrna, or something else kills the town; and suppose, also, that within that time the swamp that has filled the renowned harbor of Ephesus and rendered her ancient site deadly and uninhabitable to-day, becomes hard and healthy ground; suppose the natural consequence ensues, to wit: that Smyrna becomes a melancholy ruin, and Ephesus is rebuilt. What would the prophecy-savans say? They would coolly skip over our age of the world, and say: “Smyrna was not faithful unto death, and so her crown of life was denied her; Ephesus repented, and lo! her candle-stick was not removed. Behold these evidences! How wonderful is prophecy!”

Smyrna has been utterly destroyed six times. If her crown of life had been an insurance policy, she would have had an opportunity to collect on it the first time she fell. But she holds it on sufferance and by a complimentary construction of language which does not refer to her. Six different times, however, I suppose some infatuated prophecy-enthusiast blundered along and said, to the infinite disgust of Smyrna and the Smyrniotes: “In sooth, here is astounding fulfillment of prophecy! Smyrna hath not been faithful unto death, and behold her crown of life is vanished from her head. Verily, these things be astonishing!”

Such things have a bad influence. They provoke worldly men into using light conversation concerning sacred subjects. Thick-headed commentators upon the Bible, and stupid preachers and teachers, work more damage to religion than sensible, cool-brained clergymen can fight away again, toil as they may. It is not good judgment to fit a crown of life upon a city which has been destroyed six times. That other class of wiseacres who twist prophecy in such a manner as to make it promise the destruction and desolation of the same city, use judgment just as bad, since the city is in a very flourishing condition now, unhappily for them. These things put arguments into the mouth of infidelity.

A portion of the city is pretty exclusively Turkish; the Jews have a quarter to themselves; the Franks another quarter; so, also, with the Armenians. The Armenians, of course, are Christians. Their houses are large, clean, airy, handsomely paved with black and white squares of marble, and in the centre of many of them is a square court, which has in it a luxuriant flower-garden and a sparkling fountain; the doors of all the rooms open on this. A very wide hall leads to the street door, and in this the women sit, the most of the day. In the cool of the evening they dress up in their best raiment and show themselves at the door. They are all comely of countenance, and exceedingly neat and cleanly; they look as if they were just out of a band-box. Some of the young ladies—many of them, I may say—are even very beautiful; they average a shade better than American girls—which treasonable words I pray may be forgiven me. They are very sociable, and will smile back when a stranger smiles at them, bow back when he bows, and talk back if he speaks to them. No introduction is required. An hour’s chat at the door with a pretty girl one never saw before, is easily obtained, and is very pleasant. I have tried it. I could not talk anything but English, and the girl knew nothing but Greek, or Armenian, or some such barbarous tongue, but we got along very well. I find that in cases like these, the fact that you can not comprehend each other isn’t much of a drawback.

Coming through the Dardanelles, we saw camel trains on shore with the glasses, but we were never close to one till we got to Smyrna. These camels are very much larger than the scrawny specimens one sees in the menagerie. They stride along these streets, in single file, a dozen in a train, with heavy loads on their backs, and a fancy-looking negro in Turkish costume, or an Arab, preceding them on a little donkey and completely overshadowed and rendered insignificant by the huge beasts. To see a camel train laden with the spices of Arabia and the rare fabrics of Persia come marching through the narrow alleys of the bazaar, among porters with their burdens, money-changers, lamp-merchants, Al-naschars in the glassware business, portly cross-legged Turks smoking the famous narghili; and the crowds drifting to and fro in the fanciful costumes of the East, is a genuine revelation of the Orient.

The picture lacks nothing. It casts you back at once into your forgotten boyhood, and again you dream over the wonders of the Arabian Nights; again your companions are princes, your lord is the Caliph Haroun Al Raschid, and your servants are terrific giants and genii that come with smoke and lightning and thunder, and go as a storm goes when they depart!

The Lions of Smyrna 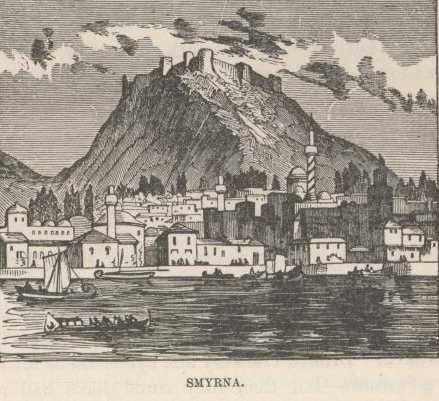