What excellent order they kept about that vast depot! There was no frantic crowding and jostling, no shouting and swearing, and no swaggering intrusion of services by rowdy hackmen. These latter gentry stood outside—stood quietly by their long line of vehicles and said never a word. A kind of hackman general seemed to have the whole matter of transportation in his hands. He politely received the passengers and ushered them to the kind of conveyance they wanted, and told the driver where to deliver them. There was no “talking back,” no dissatisfaction about overcharging, no grumbling about anything. In a little while we were speeding through the streets of Paris and delightfully recognizing certain names and places with which books had long ago made us familiar. It was like meeting an old friend when we read Rue de Rivoli on the street corner; we knew the genuine vast palace of the Louvre as well as we knew its picture; when we passed by the Column of July we needed no one to tell us what it was or to remind us that on its site once stood the grim Bastille, that grave of human hopes and happiness, that dismal prison house within whose dungeons so many young faces put on the wrinkles of age, so many proud spirits grew humble, so many brave hearts broke.
We secured rooms at the hotel, or rather, we had three beds put into one room, so that we might be together, and then we went out to a restaurant, just after lamplighting, and ate a comfortable, satisfactory, lingering dinner. It was a pleasure to eat where everything was so tidy, the food so well cooked, the waiters so polite, and the coming and departing company so moustached, so frisky, so affable, so fearfully and wonderfully Frenchy! All the surroundings were gay and enlivening. Two hundred people sat at little tables on the sidewalk, sipping wine and coffee; the streets were thronged with light vehicles and with joyous pleasure-seekers; there was music in the air, life and action all about us, and a conflagration of gaslight everywhere! 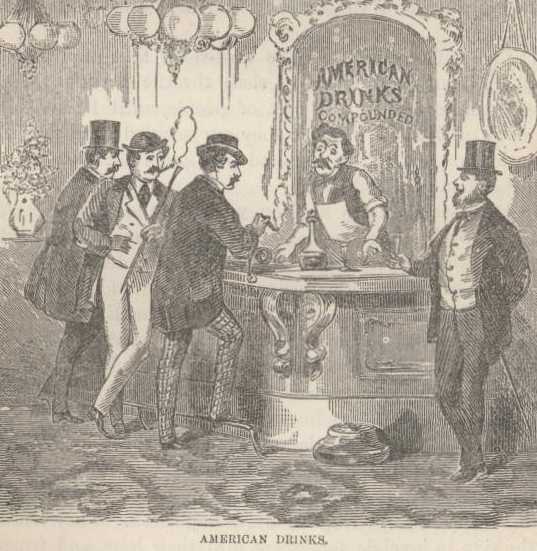 Of course we visited the renowned International Exposition. All the world did that. We went there on our third day in Paris—and we stayed there nearly two hours. That was our first and last visit. To tell the truth, we saw at a glance that one would have to spend weeks—yea, even months—in that monstrous establishment to get an intelligible idea of it. It was a wonderful show, but the moving masses of people of all nations we saw there were a still more wonderful show.

We went to see the Cathedral of Notre Dame. We had heard of it before. It surprises me sometimes to think how much we do know and how intelligent we are. We recognized the brown old Gothic pile in a moment; it was like the pictures. We stood at a little distance and changed from one point of observation to another and gazed long at its lofty square towers and its rich front, clustered thick with stony, mutilated saints who had been looking calmly down from their perches for ages.

Next we went to visit the Morgue, that horrible receptacle for the dead who die mysteriously and leave the manner of their taking off a dismal secret. We stood before a grating and looked through into a room which was hung all about with the clothing of dead men; coarse blouses, water-soaked; the delicate garments of women and children; patrician vestments, hacked and stabbed and stained with red; a hat that was crushed and bloody.

One night we went to the celebrated Jardin Mabille, but only staid a little while. We wanted to see some of this kind of Paris life, however, and therefore the next night we went to a similar place of entertainment in a great garden in the suburb of Asnieres. We went to the railroad depot, toward evening, and Ferguson got tickets for a second-class carriage. Such a perfect jam of people I have not often seen—but there was no noise, no disorder, no rowdyism.

We visited the Louvre, at a time when we had no silk purchases in view, and looked at its miles of paintings by the old masters. Some of them were beautiful, but at the same time they carried such evidences about them of the cringing spirit of those great men that we found small pleasure in examining them. Their nauseous adulation of princely patrons was more prominent to me and chained my attention more surely than the charms of color and expression which are claimed to be in the pictures.

Of course we drove in the Bois de Boulogne, that limitless park, with its forests, its lakes, its cascades, and its broad avenues. There were thousands upon thousands of vehicles abroad, and the scene was full of life and gaiety.

One of our pleasantest visits was to Pere la Chaise, the national burying-ground of France, the honored resting-place of some of her greatest and best children, the last home of scores of illustrious men and women who were born to no titles, but achieved fame by their own energy and their own genius. It is a solemn city of winding streets and of miniature marble temples and mansions of the dead gleaming white from out a wilderness of foliage and fresh flowers. Not every city is so well peopled as this, or has so ample an area within its walls.

From sumptuous Versailles, with its palaces, its statues, its gardens, and its fountains, we journeyed back to Paris and sought its antipodes—the Faubourg St. Antoine.