Toward nightfall the next evening, we steamed into the great artificial harbor of this noble city of Marseilles, and saw the dying sunlight gild its clustering spires and ramparts, and flood its leagues of environing verdure with a mellow radiance that touched with an added charm the white villas that flecked the landscape far and near. [Copyright secured according to law.]
There were no stages out, and we could not get on the pier from the ship. It was annoying. We were full of enthusiasm—we wanted to see France! Just at nightfall our party of three contracted with a waterman for the privilege of using his boat as a bridge—its stern was at our companion ladder and its bow touched the pier. We got in and the fellow backed out into the harbor. I told him in French that all we wanted was to walk over his thwarts and step ashore, and asked him what he went away out there for. He said he could not understand me. I repeated. Still he could not understand. He appeared to be very ignorant of French. The doctor tried him, but he could not understand the doctor. I asked this boatman to explain his conduct, which he did; and then I couldn’t understand him. Dan said:
“Oh, go to the pier, you old fool—that’s where we want to go!”
We reasoned calmly with Dan that it was useless to speak to this foreigner in English—that he had better let us conduct this business in the French language and not let the stranger see how uncultivated he was.
“Well, go on, go on,” he said, “don’t mind me. I don’t wish to interfere. Only, if you go on telling him in your kind of French, he never will find out where we want to go to. That is what I think about it.”
We rebuked him severely for this remark and said we never knew an ignorant person yet but was prejudiced. The Frenchman spoke again, and the doctor said:
“There now, Dan, he says he is going to allez to the douain. Means he is going to the hotel. Oh, certainly—we don’t know the French language.”
This was a crusher, as Jack would say. It silenced further criticism from the disaffected member. We coasted past the sharp bows of a navy of great steamships and stopped at last at a government building on a stone pier. It was easy to remember then that the douain was the customhouse and not the hotel. We did not mention it, however. With winning French politeness the officers merely opened and closed our satchels, declined to examine our passports, and sent us on our way. We stopped at the first cafe we came to and entered. An old woman seated us at a table and waited for orders.
The doctor said: “Avez-vous du vin?”
The dame looked perplexed. The doctor said again, with elaborate distinctness of articulation:
“Avez-vous du—vin!”
The dame looked more perplexed than before. I said:
“Doctor, there is a flaw in your pronunciation somewhere. Let me try her. Madame, avez-vous du vin?—It isn’t any use, Doctor—take the witness.”
“Madame, avez-vous du vin—du fromage—pain—pickled pigs’ feet—beurre—des oeufs—du boeuf—horseradish, sauerkraut, hog and hominy—anything, anything in the world that can stay a Christian stomach!”
She said: 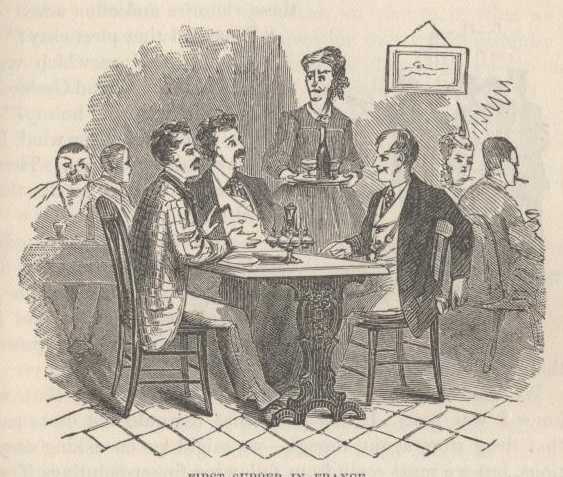 “Bless you, why didn’t you speak English before? I don’t know anything about your plagued French!”
The humiliating taunts of the disaffected member spoiled the supper, and we dispatched it in angry silence and got away as soon as we could. Here we were in beautiful France—in a vast stone house of quaint architecture—surrounded by all manner of curiously worded French signs—stared at by strangely habited, bearded French people—everything gradually and surely forcing upon us the coveted consciousness that at last, and beyond all question, we were in beautiful France and absorbing its nature to the forgetfulness of everything else, and coming to feel the happy romance of the thing in all its enchanting delightfulness—and to think of this skinny veteran intruding with her vile English, at such a moment, to blow the fair vision to the winds! It was exasperating.
We set out to find the centre of the city, inquiring the direction every now and then. We never did succeed in making anybody understand just exactly what we wanted, and neither did we ever succeed in comprehending just exactly what they said in reply, but then they always pointed—they always did that—and we bowed politely and said, “Merci, monsieur,” and so it was a blighting triumph over the disaffected member anyway. He was restive under these victories and often asked:
“What did that pirate say?”
“Why, he told us which way to go to find the Grand Casino.”
“Yes, but what did he say?”
“Oh, it don’t matter what he said—we understood him. These are educated people—not like that absurd boatman."
“Well, I wish they were educated enough to tell a man a direction that goes some where—for we’ve been going around in a circle for an hour. I’ve passed this same old drugstore seven times.”
We said it was a low, disreputable falsehood (but we knew it was not). It was plain that it would not do to pass that drugstore again, though—we might go on asking directions, but we must cease from following finger-pointings if we hoped to check the suspicions of the disaffected member.
A long walk through smooth, asphaltum-paved streets bordered by blocks of vast new mercantile houses of cream-colored stone every house and every block precisely like all the other houses and all the other blocks for a mile, and all brilliantly lighted—brought us at last to the principal thoroughfare. On every hand were bright colors, flashing constellations of gas burners, gaily dressed men and women thronging the sidewalks—hurry, life, activity, cheerfulness, conversation, and laughter everywhere! We found the Grand Hotel du Louvre et de la Paix, and wrote down who we were, where we were born, what our occupations were, the place we came from last, whether we were married or single, how we liked it, how old we were, where we were bound for and when we expected to get there, and a great deal of information of similar importance—all for the benefit of the landlord and the secret police. We hired a guide and began the business of sightseeing immediately. That first night on French soil was a stirring one. I cannot think of half the places we went to or what we particularly saw; we had no disposition to examine carefully into anything at all—we only wanted to glance and go—to move, keep moving! The spirit of the country was upon us. We sat down, finally, at a late hour, in the great Casino, and called for unstinted champagne. It is so easy to be bloated aristocrats where it costs nothing of consequence! There were about five hundred people in that dazzling place, I suppose, though the walls being papered entirely with mirrors, so to speak, one could not really tell but that there were a hundred thousand. Young, daintily dressed exquisites and young, stylishly dressed women, and also old gentlemen and old ladies, sat in couples and groups about innumerable marble-topped tables and ate fancy suppers, drank wine, and kept up a chattering din of conversation that was dazing to the senses. There was a stage at the far end and a large orchestra; and every now and then actors and actresses in preposterous comic dresses came out and sang the most extravagantly funny songs, to judge by their absurd actions; but that audience merely suspended its chatter, stared cynically, and never once smiled, never once applauded! I had always thought that Frenchmen were ready to laugh at any thing.

The Beginning of American Tourism

We have learned to go through the lingering routine of the table d’hote with patience, with serenity, with satisfaction. We take soup, then wait a few minutes for the fish; a few minutes more and the plates are changed, and the roast beef comes; another change and we take peas; change again and take lentils; change and take snail patties (I prefer grasshoppers); change and take roast chicken and salad; then strawberry pie and ice cream; then green figs, pears, oranges, green almonds, etc.; finally coffee. Wine with every course, of course, being in France.

We have driven in the Prado—that superb avenue bordered with patrician mansions and noble shade trees—and have visited the chateau Boarely and its curious museum. They showed us a miniature cemetery there—a copy of the first graveyard that was ever in Marseilles, no doubt. The delicate little skeletons were lying in broken vaults and had their household gods and kitchen utensils with them. The original of this cemetery was dug up in the principal street of the city a few years ago. 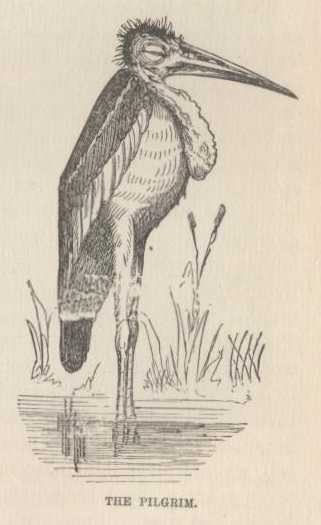 In the great Zoological Gardens we found specimens of all the animals the world produces, I think, including a dromedary, a monkey ornamented with tufts of brilliant blue and carmine hair—a very gorgeous monkey he was—a hippopotamus from the Nile, and a sort of tall, long-legged bird with a beak like a powder horn and close-fitting wings like the tails of a dress coat.

We hired a sailboat and a guide and made an excursion to one of the small islands in the harbor to visit the Castle d’If. This ancient fortress has a melancholy history. It has been used as a prison for political offenders for two or three hundred years, and its dungeon walls are scarred with the rudely carved names of many and many a captive who fretted his life away here and left no record of himself but these sad epitaphs wrought with his own hands. How thick the names were! And their long-departed owners seemed to throng the gloomy cells and corridors with their phantom shapes.