On the Western Prairie 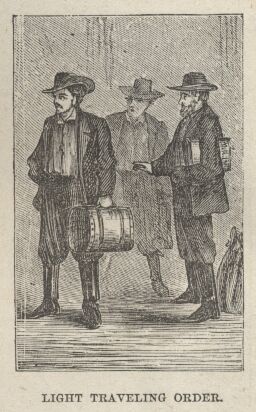 From Orion's Journal:  July 26.—Left St. Joseph. Started on the plains about ten miles out. The plains here are simply prairie.

Differing from the card table surfaces of the formation in Illinois and the lands east of the Mississippi, the Western prairies are rarely flat ground. Their elevation above sea level varies from 1000 to 2500 feet and the plateau's aspect impresses the eye with an exaggerated idea of elevation, there being no object of comparison, mountain, hill or sometimes even a tree to give a juster measure.

Another peculiarity of the prairie is in places its seeming horizontality whereas it is never level on an open plain, apparently flat as a man's palm, you cross a long ground swell which was not perceptible before and on its farther incline you come upon a chasm wide and deep enough to contain a settlement.

The aspect was by no means unprepossessing. Over the rolling surface, which however rarely breaks into hill and dale, lay a tapestry of thick grass already turning to a ruddy yellow under the influence of approaching autumn.

The uniformity was relieved by streaks of livelier green in the rich soils of the slopes hollows and ravines where the water gravitates and in the deeper intervales and bottom lands on the banks of streams and courses by the graceful undulations and the waving lines of mottes or prairie islands, thick clumps and patches simulating orchards by the side of cultivated fields.

The silvery cirri and cumuli of the upper air flecked the surface of earth with spots of dark cool shade surrounded by a blaze of sunshine and by their motion as they trooped and chased one another gave a peculiar liveliness to the scene while here and there a bit of hazy blue distance a swell of the sea like land upon the far horizon gladdened the sight, every view is fair from afar.

Nothing I may remark is more monotonous except perhaps the African and Indian jungle than those prairie tracts where the circle of which you are the centre has but about a mile of radius it is an ocean in which one loses sight of land.

You see as it were the ends of the earth and look around in vain for some object upon which the eye may rest, it wants the sublimity of repose so suggestive in the sandy deserts and the perpetual motion so pleasing in the aspect of the sea.

No animals appeared in sight where thirty years ago a band of countless bisons dotted the plains, they will however like the wild aborigines their congeners, soon be followed by beings higher in the scale of creation.

These prairies are preparing to become the great grazing grounds which shall supply the unpopulated East with herds of civilized kine and perhaps with the yak of Tibet the llama of South America and the koodoo and other African antelopes.

From Orion's Journal:  July 26.—Left St. Joseph. Started on the plains about ten miles out. The plains here are simply prairie.

As we sped onward we soon made acquaintance with a traditionally familiar feature, the "pitch-holes," or "chuck-holes" --  the ugly word is not inappropriate -- which render traveling over the prairies at times a sore task. They are gullies and gutters, not unlike the Canadian "cahues" of snow formation: varying from 10 to 50 feet in breadth, they are rivulets in spring and early summer, and -- few of them remain perennial --  they lie dry during the rest of the year.

Passing through a few wretched shanties called Troy-- last insult to the memory of hapless Pergamus-- and Syracuse (here we are in the third or classic stage of United States nomenclature), we made, at 3 PM,  Cold Springs, the junction of the Leavenworth route. Having taken the northern road to avoid rough ground and bad bridges, we arrived about two hours behind time. The aspect of things at Cold Springs, where we were allowed an hour's halt to dine and to change mules, somewhat dismayed our fine-weather prairie travelers.

The next settlement, Valley Home, was reached at 6 PM. Here, the long wave of the ocean land broke into shorter seas and for the first time that day we saw stones, locally called rocks (a Western term embracing every thing between a pebble and a boulder), the produce of nullahs and ravines. A well 10 to 12 feet deep supplied excellent water. The ground was in places so far reclaimed as to be divided off by posts and rails, the scanty crops of corn (Indian corn), however were wilted and withered by the drought, which this year had been unusually long.

Beyond Kennekuk we crossed the first Grasshopper Creek. Creek, I must warn the English reader, is pronounced "crik," and in these lands, as in the jargon of Australia, means not "an arm of the sea," but a small stream of sweet water, a rivulet; the rivers of Europe, according to the Anglo-American of the West, are "criks." On our line there are many grasshopper creeks; they anastomose with, or debouch into, the Kansas River, and they reach the sea via the Missouri, and the Mississippi.

Resuming, through air refrigerated by rain, our now weary way, we reached at 6 AM a favorite camping ground, the "Big Nemehaw" Creek, which, like its lesser neighbor, flows after rain into the Missouri River, via Turkey Creek, the Big Blue, and the Kansas. It is a fine bottom of rich black soil, whose green woods at that early hour were wet with heavy dew, and scattered over the surface lay pebbles and blocks of quartz, and porphyritic granites.

Cross Wildcat Creek and other nullahs. Seven miles beyond Seneca lies Ash Point, a few wooden huts, thence to "Uncle John's Grocery," where liquor and stores are procurable. Eleven miles from Big Nemehaw water, wood, and grass are found at certain seasons near the head of a ravine. Thence to Vermilion Creek, which heads to the NE and enters the Big Blue 20 miles above its mouth. The ford is miry after rain, and the banks are thickly wooded. Water is found in wells 40 - 43 feet deep.

July 27. Crossed the Nebraska line about 180 miles from St. Joseph. Here we saw the first Jack Rabbit. They have larger legs bodies, longer legs and longer ears than our rabbits.

We then stretched once more over the "divide" --  the ground, generally rough or rolling, between the fork or junction of two streams, in fact, the Indian Doab-- separating the Big Blue from its tributary the Little Blue. At 6 PM we changed our fagged animals for fresh, and the land of Kansas for Nebraska, at Cottonwood Creek, a bottom where trees flourished, where the ground had been cleared for corn, and where we detected the prairie wolf watching for the poultry.

A weary drive over a rough and dusty road, through chill night air and clouds of mosquitoes, which we were warned would accompany us to the Pacific slope of the Rocky Mountains, placed us about 10 PM at Rock, also called Turkey Creek --  surely a misnomer, no turkey ever haunted so villainous a spot! Several passengers began to suffer from fever and nausea; in such travel the second night is usually the crisis, after which a man can endure for an indefinite time. The "ranch" was a nice place for invalids, especially for those of the softer sex.