We hired a sailboat and a guide and made an excursion to one of the small islands in the harbor to visit the Castle d’If. This ancient fortress has a melancholy history. It has been used as a prison for political offenders for two or three hundred years, and its dungeon walls are scarred with the rudely carved names of many and many a captive who fretted his life away here and left no record of himself but these sad epitaphs wrought with his own hands. How thick the names were! And their long-departed owners seemed to throng the gloomy cells and corridors with their phantom shapes. We loitered through dungeon after dungeon, away down into the living rock below the level of the sea, it seemed. Names everywhere!—some plebeian, some noble, some even princely. Plebeian, prince, and noble had one solicitude in common—they would not be forgotten! They could suffer solitude, inactivity, and the horrors of a silence that no sound ever disturbed, but they could not bear the thought of being utterly forgotten by the world. Hence the carved names. In one cell, where a little light penetrated, a man had lived twenty-seven years without seeing the face of a human being—lived in filth and wretchedness, with no companionship but his own thoughts, and they were sorrowful enough and hopeless enough, no doubt. Whatever his jailers considered that he needed was conveyed to his cell by night through a wicket. 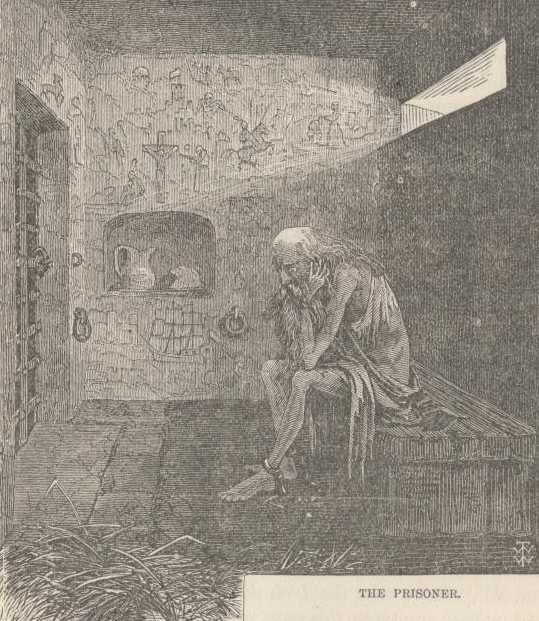 This man carved the walls of his prison house from floor to roof with all manner of figures of men and animals grouped in intricate designs. He had toiled there year after year, at his self-appointed task, while infants grew to boyhood—to vigorous youth—idled through school and college—acquired a profession—claimed man’s mature estate—married and looked back to infancy as to a thing of some vague, ancient time, almost. But who shall tell how many ages it seemed to this prisoner? With the one, time flew sometimes; with the other, never—it crawled always. To the one, nights spent in dancing had seemed made of minutes instead of hours; to the other, those selfsame nights had been like all other nights of dungeon life and seemed made of slow, dragging weeks instead of hours and minutes.
One prisoner of fifteen years had scratched verses upon his walls, and brief prose sentences—brief, but full of pathos. These spoke not of himself and his hard estate, but only of the shrine where his spirit fled the prison to worship—of home and the idols that were templed there. He never lived to see them.
The walls of these dungeons are as thick as some bed-chambers at home are wide—fifteen feet. We saw the damp, dismal cells in which two of Dumas’ heroes passed their confinement—heroes of “Monte Cristo.” It was here that the brave Abbe wrote a book with his own blood, with a pen made of a piece of iron hoop, and by the light of a lamp made out of shreds of cloth soaked in grease obtained from his food; and then dug through the thick wall with some trifling instrument which he wrought himself out of a stray piece of iron or table cutlery and freed Dantes from his chains. It was a pity that so many weeks of dreary labor should have come to naught at last.
They showed us the noisome cell where the celebrated “Iron Mask”—that ill-starred brother of a hardhearted king of France—was confined for a season before he was sent to hide the strange mystery of his life from the curious in the dungeons of Ste. Marguerite. The place had a far greater interest for us than it could have had if we had known beyond all question who the Iron Mask was, and what his history had been, and why this most unusual punishment had been meted out to him. Mystery! That was the charm. That speechless tongue, those prisoned features, that heart so freighted with unspoken troubles, and that breast so oppressed with its piteous secret had been here. These dank walls had known the man whose dolorous story is a sealed book forever! There was fascination in the spot.
(Innocents Abroad)