The Rock of Gibraltar 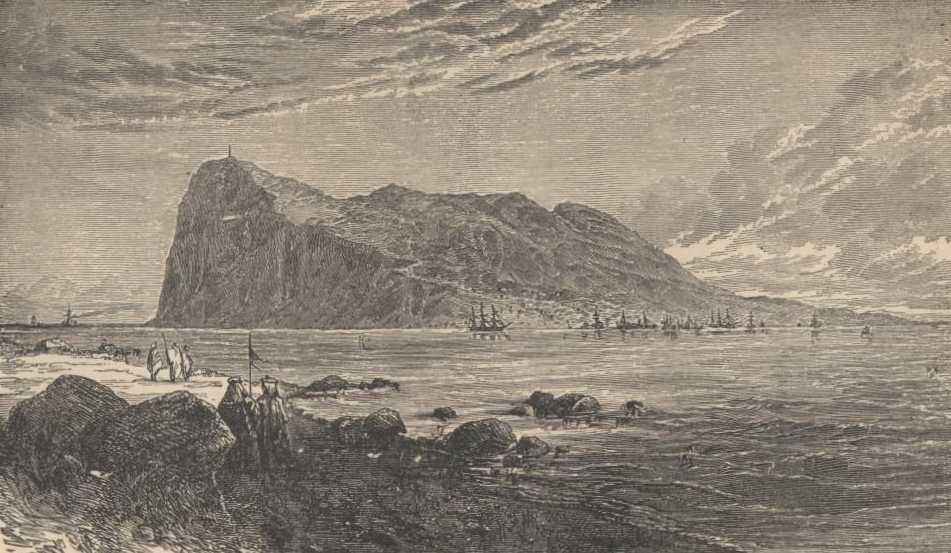 In a few moments a lonely and enormous mass of rock, standing seemingly in the center of the wide strait and apparently washed on all sides by the sea, swung magnificently into view, and we needed no tedious traveled parrot to tell us it was Gibraltar. There could not be two rocks like that in one kingdom.
The Rock of Gibraltar is about a mile and a half long, I should say, by 1,400 to 1,500 feet high, and a quarter of a mile wide at its base. One side and one end of it come about as straight up out of the sea as the side of a house, the other end is irregular and the other side is a steep slant which an army would find very difficult to climb. At the foot of this slant is the walled town of Gibraltar—or rather the town occupies part of the slant. Everywhere—on hillside, in the precipice, by the sea, on the heights—everywhere you choose to look, Gibraltar is clad with masonry and bristling with guns. It makes a striking and lively picture from whatsoever point you contemplate it. It is pushed out into the sea on the end of a flat, narrow strip of land, and is suggestive of a “gob” of mud on the end of a shingle. A few hundred yards of this flat ground at its base belongs to the English, and then, extending across the strip from the Atlantic to the Mediterranean, a distance of a quarter of a mile, comes the “Neutral Ground,” a space two or three hundred yards wide, which is free to both parties.

“Are you going through Spain to Paris?” That question was bandied about the ship day and night from Fayal to Gibraltar, and I thought I never could get so tired of hearing any one combination of words again or more tired of answering, “I don’t know.” At the last moment six or seven had sufficient decision of character to make up their minds to go, and did go, and I felt a sense of relief at once—it was forever too late now and I could make up my mind at my leisure not to go. I must have a prodigious quantity of mind; it takes me as much as a week sometimes to make it up.
But behold how annoyances repeat themselves. We had no sooner gotten rid of the Spain distress than the Gibraltar guides started another—a tiresome repetition of a legend that had nothing very astonishing about it, even in the first place: “That high hill yonder is called the Queen’s Chair; it is because one of the queens of Spain placed her chair there when the French and Spanish troops were besieging Gibraltar, and said she would never move from the spot till the English flag was lowered from the fortresses. If the English hadn’t been gallant enough to lower the flag for a few hours one day, she’d have had to break her oath or die up there.”
We rode on asses and mules up the steep, narrow streets and entered the subterranean galleries the English have blasted out in the rock. These galleries are like spacious railway tunnels, and at short intervals in them great guns frown out upon sea and town through portholes five or six hundred feet above the ocean. There is a mile or so of this subterranean work, and it must have cost a vast deal of money and labor. The gallery guns command the peninsula and the harbors of both oceans, but they might as well not be there, I should think, for an army could hardly climb the perpendicular wall of the rock anyhow. Those lofty portholes afford superb views of the sea, though. At one place, where a jutting crag was hollowed out into a great chamber whose furniture was huge cannon and whose windows were portholes, a glimpse was caught of a hill not far away, and a soldier said:
“That high hill yonder is called the Queen’s Chair; ..."

On the topmost pinnacle of Gibraltar we halted a good while, and no doubt the mules were tired. They had a right to be. The military road was good, but rather steep, and there was a good deal of it. The view from the narrow ledge was magnificent; from it vessels seeming like the tiniest little toy boats were turned into noble ships by the telescopes, and other vessels that were fifty miles away and even sixty, they said, and invisible to the naked eye, could be clearly distinguished through those same telescopes. Below, on one side, we looked down upon an endless mass of batteries and on the other straight down to the sea.
While I was resting ever so comfortably on a rampart, and cooling my baking head in the delicious breeze, an officious guide belonging to another party came up and said:
“Senor, that high hill yonder is called the Queen’s Chair—”
“Sir, I am a helpless orphan in a foreign land. Have pity on me. Don’t—now don’t inflict that most in-FERNAL old legend on me anymore today!”

There—I had used strong language after promising I would never do so again; but the provocation was more than human nature could bear. If you had been bored so, when you had the noble panorama of Spain and Africa and the blue Mediterranean spread abroad at your feet, and wanted to gaze and enjoy and surfeit yourself in its beauty in silence, you might have even burst into stronger language than I did.

Gibraltar has stood several protracted sieges, one of them of nearly four years’ duration (it failed), and the English only captured it by stratagem. The wonder is that anybody should ever dream of trying so impossible a project as the taking it by assault—and yet it has been tried more than once.
The Moors held the place twelve hundred years ago, and a staunch old castle of theirs of that date still frowns from the middle of the town, with moss-grown battlements and sides well scarred by shots fired in battles and sieges that are forgotten now. A secret chamber in the rock behind it was discovered some time ago, which contained a sword of exquisite workmanship, and some quaint old armor of a fashion that antiquaries are not acquainted with, though it is supposed to be Roman. Roman armor and Roman relics of various kinds have been found in a cave in the sea extremity of Gibraltar; history says Rome held this part of the country about the Christian era, and these things seem to confirm the statement.
In that cave also are found human bones, crusted with a very thick, stony coating, and wise men have ventured to say that those men not only lived before the flood, but as much as ten thousand years before it. It may be true—it looks reasonable enough—but as long as those parties can’t vote anymore, the matter can be of no great public interest. In this cave likewise are found skeletons and fossils of animals that exist in every part of Africa, yet within memory and tradition have never existed in any portion of Spain save this lone peak of Gibraltar! So the theory is that the channel between Gibraltar and Africa was once dry land, and that the low, neutral neck between Gibraltar and the Spanish hills behind it was once ocean, and of course that these African animals, being over at Gibraltar (after rock, perhaps—there is plenty there), got closed out when the great change occurred. The hills in Africa, across the channel, are full of apes, and there are now and always have been apes on the rock of Gibraltar—but not elsewhere in Spain! The subject is an interesting one.
There is an English garrison at Gibraltar of 6,000 or 7,000 men, and so uniforms of flaming red are plenty; and red and blue, and undress costumes of snowy white, and also the queer uniform of the bare-kneed Highlander; and one sees soft-eyed Spanish girls from San Roque, and veiled Moorish beauties (I suppose they are beauties) from Tarifa, and turbaned, sashed, and trousered Moorish merchants from Fez, and long-robed, bare-legged, ragged Muhammadan vagabonds from Tetuan and Tangier, some brown, some yellow and some as black as virgin ink—and Jews from all around, in gabardine, skullcap, and slippers, just as they are in pictures and theaters, and just as they were three thousand years ago, no doubt. You can easily understand that a tribe (somehow our pilgrims suggest that expression, because they march in a straggling procession through these foreign places with such an Indian-like air of complacency and independence about them) like ours, made up from fifteen or sixteen states of the Union, found enough to stare at in this shifting panorama of fashion today.