At this present moment half a dozen of us are taking a private pleasure excursion of our own devising. We form rather more than half the list of white passengers on board a small steamer bound for the venerable Moorish town of Tangier, Africa. Nothing could be more absolutely certain than that we are enjoying ourselves. One can not do otherwise who speeds over these sparkling waters and breathes the soft atmosphere of this sunny land. Care cannot assail us here. We are out of its jurisdiction.
We even steamed recklessly by the frowning fortress of Malabat (a stronghold of the Emperor of Morocco) without a twinge of fear. The whole garrison turned out under arms and assumed a 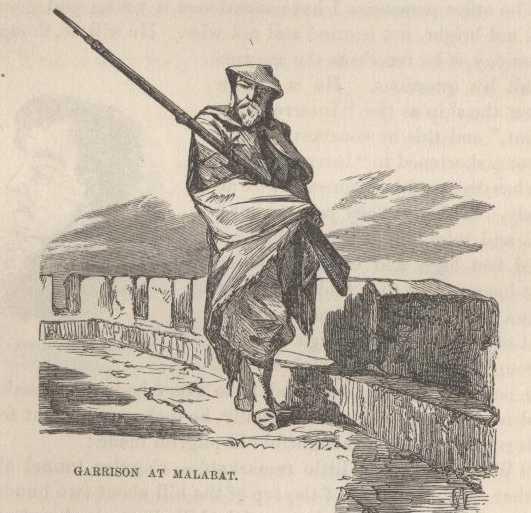 threatening attitude—yet still we did not fear. The entire garrison marched and counter-marched within the rampart, in full view—yet notwithstanding even this, we never flinched.  [See Cape Malabata]

"Tangier! A tribe of stalwart Moors are wading into the sea to carry us ashore on their backs from the small boats."