The Straits of Gibraltar

Within the hour we were fairly within the Straits of Gibraltar, the tall yellow-splotched hills of Africa on our right, with their bases veiled in a blue haze and their summits swathed in clouds—the same being according to Scripture, which says that “clouds and darkness are over the land.” The words were spoken of this particular portion of Africa, I believe. On our left were the granite-ribbed domes of old Spain. The strait is only thirteen miles wide in its narrowest part.
At short intervals along the Spanish shore were quaint-looking old stone towers—Moorish, we thought—but learned better afterwards. In former times the Morocco rascals used to coast along the Spanish Main in their boats till a safe opportunity seemed to present itself, and then dart in and capture a Spanish village and carry off all the pretty women they could find. It was a pleasant business, and was very popular. The Spaniards built these watchtowers on the hills to enable them to keep a sharper lookout on the Moroccan speculators. 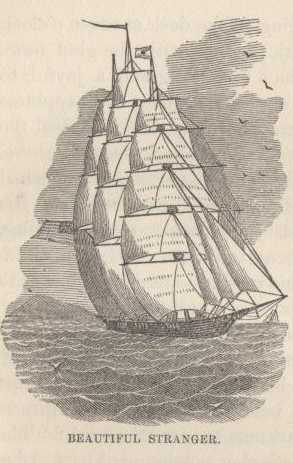 The picture on the other hand was very beautiful to eyes weary of the changeless sea, and by and by the ship’s company grew wonderfully cheerful. But while we stood admiring the cloud-capped peaks and the lowlands robed in misty gloom a finer picture burst upon us and chained every eye like a magnet—a stately ship, with canvas piled on canvas till she was one towering mass of bellying sail! She came speeding over the sea like a great bird. Africa and Spain were forgotten. All homage was for the beautiful stranger. While everybody gazed she swept superbly by and flung the Stars and Stripes to the breeze! Quicker than thought, hats and handkerchiefs flashed in the air, and a cheer went up! She was beautiful before—she was radiant now. Many a one on our decks knew then for the first time how tame a sight his country’s flag is at home compared to what it is in a foreign land. To see it is to see a vision of home itself and all its idols, and feel a thrill that would stir a very river of sluggish blood!
We were approaching the famed Pillars of Hercules, and already the African one, “Ape’s Hill,” a grand old mountain with summit streaked with granite ledges, was in sight. The other, the great Rock of Gibraltar, was yet to come. The ancients considered the Pillars of Hercules the head of navigation and the end of the world. The information the ancients didn’t have was very voluminous. Even the prophets wrote book after book and epistle after epistle, yet never once hinted at the existence of a great continent on our side of the water; yet they must have known it was there, I should think.